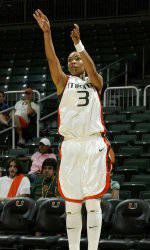 Hurricanes Head to Virginia Wednesday for WNIT Second Round

First-year head coach Katie Meier and the Hurricanes are coming off a 95-83 WNIT first round win over cross-town rival FIU Saturday night in Coral Gables, marking UM’s first postseason victory since the 2001 WNIT.

Junior guard Renee Taylor, an All-ACC Honorable Mention selection, ranks second on the team and sixth in the ACC in scoring (15.6 ppg).

Coming off a 4-of-5 three-point effort against FIU, senior guard Melissa Knight is third on the team with 11.6 points per game. Knight, UM’s fifth-ranked all-time leader in three-pointers made and attempted, has hit 39.4 percent (29-50) from beyond the arc this season which is the third-highest single season percentage in school history.

Sophomore forward Lamese James has been one of UM’s most productive players of late averaging 11.0 points and 7.3 rebounds over the last three games.

The Cavaliers are led by sophomore guard Sharnee Zoll, a Third Team All-ACC selection who ranks first in the ACC in assists (6.13 apg) and fourth in steals (2.30 spg). Zoll is third on the team in scoring with 11.0 points per game.

Sardin, Virginia’s lone senior, is the team leader in rebounding with 6.7 boards per game.

The Series vs. Virginia

This will mark the second meeting this season and fourth meeting between the Hurricanes and the Cavaliers. Virginia owns a 2-1 series advantage after knocking off the Hurricanes 77-65 earlier this season in a Jan. 22 match-up in Coral Gables. Miami’s lone victory against UVa came last season in a 66-60 victory at Virginia in UM’s only game at University Hall.

Earlier this season the Hurricanes were outscored 47-36 in the second half and 17-11 in the last five minutes of the game to suffer a loss to the Cavaliers at the BankUnited Center.

A Quick Look Ahead

Should the Hurricanes win, they will face the winner of Wednesday’s Mississippi-Pittsburgh game in the quarterfinals. Game date, time and location to be determined.