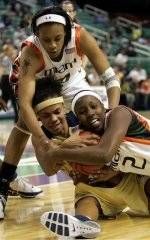 GREENSBORO, N.C. – Outscoring Miami 28-12 in the final seven minutes of play, No. 11 seed Georgia Tech knocked off the sixth-seeded Hurricanes 79-62 Thursday night in the first round of the 2006 ACC Tournament at the Greensboro Coliseum.

With the Hurricanes trailing 51-47 with 8:23 remaining, sophomore forward Lamese James, who would finish with 13 points and seven rebounds, scored underneath to bring Miami within two points of the lead.

On Miami’s next possession down, Tamara James drew a foul and, following a miss on her first attempt, connected on the second to close the Yellow Jacket lead to 51-50 with 7:20 left to play.

Georgia Tech responded with a 10-0 run led by two Chioma Nnamaka three-pointers to open the lead up to 60-50 with just under five minutes remaining.

Senior forward Melissa Knight knocked down a three-pointer for the Hurricanes to end the Tech run, bringing UM back with seven, but Miami could not cut the lead any closer, eventually falling 79-62.

Behind 26 total rebounds and Jill Ingram’s 10 first half points, the Yellow Jackets held 36-32 lead heading into the half.

The Yellow Jackets’ Stephanie Higgs led all scorers with 22 points and added 10 rebounds.