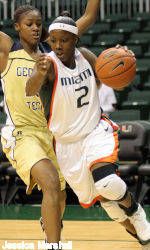 CORAL GABLES, Fla. – Playing in her final home game at the BankUnited Center, senior forward Tamara James recorded one of the more memorable games of her UM career Sunday, scoring a season-high 37 points to lead Miami past Georgia Tech 90-85 in a double-overtime thriller.

In the final overtime, she would hit 3-of-4 free throw attempts en route to the second-highest scoring outing of her career as Miami pulled away with the 90-85 win. The National Player of the Year candidate also tied a career-high with seven steals.

With the win, the Hurricanes secure the No. 6 seed in the 2006 ACC Tournament in Greensboro, N.C. where they will once-again face the No. 11 seed Yellow Jackets Thursday, March 2 at 9:30 p.m.

The Hurricanes and Yellow Jackets battled back and forth in a first half that featured five lead changes. James netted 17 and senior Melissa Knight, who finished with 14 on the day, knocked down nine first-half points to help give UM a 41-35 lead heading into the break.

The two schools traded baskets over the next 10 minutes with neither team taking more than a five point lead.

James would rattle off seven-consecutive points capped off by an assist on a Katie Hayek basket to put UM up 66-63 with 4:52 left.

The Yellow Jackets battled back as Jill Ingram scored four of her team-high 20 points on back-to-back baskets to put Georgia Tech ahead 69-68 with 2:29 remaining.

Miami answered on their next possession, as Knight hit a wide-open three from the top of the key to put UM up 71-69 with just over two minutes left to play.

With under 20 seconds remaining, Tech’s Stephanie Higgs missed a scoring opportunity, but teammate Kasha Terry grabbed the offensive rebound and followed with the put-back to time the game at 71-all with 15 seconds showing.

Coming out of a timeout, Miami worked the ball to James who drove into the lane and hit a turnaround jumper in the paint with three seconds left over two defenders to push UM ahead 73-71.

Not to be outdone, Georgia Tech’s Janie Mitchell managed to get off a shot that fell through as time expired to send the game into the first overtime.

In the first overtime, Ingram gave the Yellow Jackets the 79-77 go ahead basket with 1:25 showing.

Georgia Tech would hold the lead until UM’s last possession when James came off a Knight screen to hit the game-tying three-pointer which would lead to a second overtime.

In the second overtime, Miami would never trail following a three-pointer by junior guard Renee Taylor, who finished with 22 points.

Sophomore Lamese James nearly notched the first double-double of her career, scoring nine points with nine rebounds in the win.