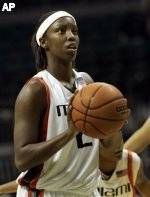 CORAL GABLES, Fla. (AP) – Monique Currie scored 15 of her 43 points in the second overtime to help top-ranked Duke avoid an upset with a 99-93 win over Miami on Sunday.

Miami’s Albrey Grimsley hit a short jumper with 31 seconds in the first overtime to tie the game at 78.

The Hurricanes had been down 73-70 with 3.6 seconds left in regulation before Tamara James hit three free throws to tie the game. James retrieved Katie Hayek’s missed 3-pointer and was fouled by Wanisha Smith as she attempted a 3-point shot.

Harding missed a desperation shot at the buzzer that sent the game to overtime.

Miami rallied from a 70-63 deficit in the final 48 seconds of regulation.

The Hurricanes were within 72-70 after James’ two free throws 20.9 seconds left. Currie converted on only one of two free throws with 16.6 seconds remaining, allowing Miami an opportunity to tie the game.

Knight hit four 3-pointers, keeping the Hurricanes within striking distance in the first half. Her first 3-pointer put Miami ahead 19-15 with 10:43 remaining and her final 3 cut the Blue Devils’ lead to 32-27 with 4:07 remaining in the half.