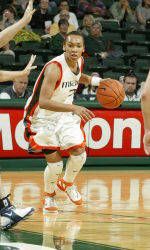 Deirdre Naughton had 16 points and 13 rebounds for the Demon Deacons (10-11, 2-7), who lost their fifth straight game as their overall record fell below .500 for the first time this season.

The Demon Deacons trailed by seven points midway through the first half before mounting a comeback, with Strunk’s four-point play putting Wake Forest up 21-20 with 9:20 left. But the Hurricanes responded with a 10-point run to regain the lead, going up 42-35 at the half.

Miami stretched its margin to 11 points in the opening five minutes of the second period, with Katie Hayek’s 3-pointer putting the Hurricanes up 53-42 with 15:55 left.

Wake Forest then mounted another rally, with Groves scoring seven of the Demon Deacons’ next 10 points to cut Miami’s lead to 53-52 with 13:05 remaining.

Wake Forest could not sustain the momentum and the Hurricanes began pulling away. Miami led by as many as 12 points, going ahead 71-59 when Knight hit a pair of free throws with 4:31 left.