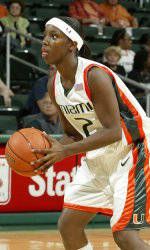 CORAL GABLES, Fla. – Senior forward Tamara James knocked down a game-high 26 points, hitting 10-of-13 shots from the field, to lift Miami past 25th-ranked Mississippi 79-70 Thursday night in the Championship Game of the 2005 Hurricane Holiday Classic.

James, who hit 22-of-25 shot from the floor in two Miami (10-2) wins en route to being named the tournament’s most valuable player, nearly notched her fifth double-double of the season with eight rebounds against Ole Miss (10-3) while recording a pair of assists and steals.

Junior guard Renee Taylor, who garnered All-Tournament honors, added 14 points and nine assists as the Hurricanes hit 53.4 percent from the field to help give first-year head coach Katie Meier her first win over a ranked opponent at Miami.

“This was a really big win because it answered questions in terms of are we for real,” said Meier. “I could see the intensity of our players in the first 30 seconds of the game and I knew that we were going to play well.”

After taking a five-point 79-70 lead into the half Miami jumped on the Rebels early in the second half, going up by as much as 11 at 54-43 seven minutes into the half.

Miami and Ole Miss traded baskets through the next nine minutes until, with 2:05 left to play, the Rebels put together a 7-0 run capped off by a layup by All-Tournament selection Ashley Awkward to bring Ole Miss within three points at 73-70 with 1:14 showing.

The Hurricanes responded on their next possession down the floor as, with the shot clock winding down, James kicked the ball out to senior guard Melissa Knight for a three-pointer from the wing with 43 seconds left to put UM up by six.

Taylor would sink three free throws down the stretch as Miami held Ole Miss scoreless over the remainder of the game to seal the 79-70 victory.

“The first thing I said to the team in the locker room after the game was that this shows that we are good, but the thing that is the most exciting is that I see us getting so much better,” said Meier.

In a game in which Miami never trailed, the Hurricanes held Mississippi to 41.7 percent shooting from the field, including 9.1 percent from beyond the three-point line.

A day after recording a career-high nine rebounds, sophomore forward Lamese James scored a career-best 10 points off the bench for the Hurricanes and sophomore guard Albrey Grimsley added seven rebounds off the bench.