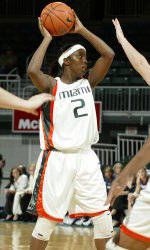 James, one of five UM (9-2) players to score double figures, hit 4-of-5 shots from beyond the three-point line and added six rebounds and five steals in Miami’s second 100-point game of the season.

James’ 12-of-14 performance from the field would mark the fourth highest single-game field goal percentage (.857) in UM history.

In one of Miami’s most impressive team performances on the year, the Hurricanes tied the school record for assists in a single game, recording 32 assists on 41 field goals made while shooting a season-high 62.1 percent from the field against the Aggies (0-8).

The two teams battled in the game’s early minutes with neither school taking more than a five-point lead in the first eight minutes of play until, with UM up by two at the 11:39 mark, N.C. A&T’s Ahmad Williams tied the game at 17-all with a jumper.

Highlighted by James’ 24 first-half points, Miami responded by outscoring the Aggies 35-10 over the remainder of the half to take a 52-27 lead into the break.

Miami continued to roll in the second half as freshman center Brittany Denson turned in her second double-double of the season with 13 points and 11 rebounds and senior guard Katie Hayek added a season-high 15 points to lead the Hurricanes to the 39-point victory.

North Carolina A&T’s Shareka Glover led all scorers with 33 points on 6-of-12 shooting from behind the three-point line.

Miami will return Thursday for the Hurricane Holiday Classic Championship Game at 7 p.m. where they will face 25th-ranked Mississippi, who downed Maine 72-52 in Game 1 earlier Wednesday.