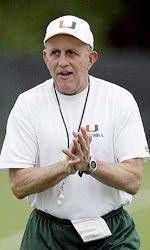 Hurricanes Put A Wrap On Bowl Practice In Coral Gables

CORAL GABLES, Fla. – The ninth-ranked Miami Hurricanes football team practiced on campus for the final time in the 2005 calendar year on Thursday morning at the Greentree Practice Fields. Coaches and players will have the next couple of days free to spend the holiday season with family and friends before heading off to Atlanta for the Chick-fil-A Peach Bowl on Dec. 30.

“We’re going to turn the guys loose and let them go home and have a little free time to relax,” head coach Larry Coker said. “We’ve had an outstanding two weeks of work. I just hope we can finish it off and have a great week in Atlanta. We know we have a tremendous challenge and we have got to play well. We expect to play well.”

The two weeks of practice in Coral Gables was ample time enough for Coker and his staff to implement game plans for the matchup with No. 10 Louisiana State. “We’d have to go into 50 overtimes to get it all covered,” Coker said “We’ve got plenty done. We just need to execute what we have.”

The entire team and staff will be in Atlanta by December 26.

The University of Miami has already reached the 10,000 mark for tickets to the Chick-fil-A Peach Bowl, which is more than double the number sold a year ago.

“We’ve distributed more than 10,000 tickets this year, which is twice as many as we did last year for the Chick-fil-A Peach Bowl,” said Miami athletic director Paul Dee. “We feel really, really good about that. But we’re going to continue to sell and get people to the game. We feel really good about the way our fans have been following us and how people from all over the country have wanted tickets for this game. When you go from 5,000 to 10,000 tickets in one year, going back to the same city, that’s pretty good.”

Dee commented on the fact that the game is one of only three bowl games that matches two top 10 teams, but he added, “I think a lot of people are interested in this year’s team. We are really pleased with the reaction we got from alumni in Atlanta and the areas around Tennessee, Alabama and the Carolinas coming in for the game. A lot of people are coming up from Miami. I think the game time might have helped us, too, not being on New Year’s Eve. People can get back, and the airfares have been really good. I have to assume that it’s all of those factors and that people are going to go to Atlanta, come home and have New Year’s Eve here.”