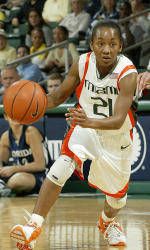 In a second-half that featured three lead changes and eight instances in which the score was tied, the Hurricanes (6-1) and Golden Panthers (4-2) would trade baskets as FIU took a 60-59 lead on a Lasma Jekabsone jumper with 5:47 remaining.

Just under a minute later, UM’s Renee Taylor, who would finish with a game-high 20 points, lifted the Hurricanes ahead 61-60 on a pair of free throws with 4:58 left to play.

Jekabsone missed on FIU’s ensuing possession and Miami capitalized as Katie Hayek followed up on a Melissa Knight shot to put UM up by three at 63-60 with 4:34 remaining.

Jekabsone hit a jumper, part of her 12-point, 13-rebound night, the next time down to cut the Hurricane lead to one with 4:08 left and just over one-and-a-half minute later, she knocked down a free throw to tie the game at 63 with 2:45 showing.

The FIU comeback would end their as freshman LaToya Cunningham drained a three-pointer that would spark at 12-0 Miami run, which also included two crucial steals by Knight, to end the game and clinch the 75-63 victory.

Senior forward Tamara James posted her third double-double of the season, finishing with 13 points and 14 rebounds. James’ double-double came the hard way as she recorded 11 rebounds and all 13 points in the second half alone.

Up by as much as 12 at one point, Miami went into the locker room with just a one-point first-half lead at 34-33.

Eva Makela was FIU’s leading scorer with 16 points in addition to eight rebounds.

The Hurricanes return to action Saturday as they take on Hartford at the BankUnited Center at 4:30 p.m.