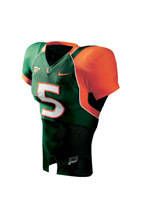 “They’re good,” said Hurricanes head coach Larry Coker. “I like them, but more important, I think the players like them. It’s a nice color, a little flash and a little flair. I think they’ll like playing in them.”

Miami is the third of four colleges who were chosen to wear the new uniforms this season, joining the University of Florida, Virginia Tech and the University of Oregon. This is the second major change in jerseys this season for UM, as the Hurricanes wore uniforms from the 1967 and 1968 seasons for the last home game against North Carolina.

“We’re excited about the opportunity to be one of four schools wearing the Revolution jersey,” said UM director of marketing David Lovell. “The University of Miami has always been on the cutting edge of uniform design and function, and the Revolution uniform is no different.”