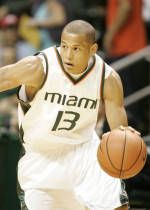 SEATTLE (AP) – The Miami Hurricanes regained their momentum in the final 6 1/2 minutes after almost squandering a 25-point lead, defeating Texas-Arlington 76-65 on Sunday in an opening round game in the Black Coaches Association tournament.

Guards Robert Hite and Guillermo Diaz led the Atlantic Coast Conference Hurricanes with 17 and 16 points, respectively, while 6-foot-10 forward Gary Hamilton came off the bench to get 10 points and nine rebounds.

The long and athletic Hurricanes (1-0) dominated the game from the beginning and stretched their lead to 45-20 in the first 1:17 of the second half before the Mavericks (0-1) came storming back.

In the final 6:22, Hite had seven of Miami’s final 20 points, sinking a 3-pointer and a fastbreak layup.

The first half was all Miami.