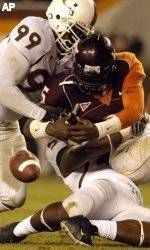 BLACKSBURG, Va. (AP) – Miami swaggered into Virginia Tech as underdogs and took a huge bite out of the Hokies’ national title hopes.

The fifth-ranked Hurricanes put the clamps on Marcus Vick, forcing him into six turnovers, and blew the Hokies right out of the national title picture with a stunning 27-7 victory on Saturday night.

The third-ranked Hokies (8-1, 5-1 Atlantic Coast Conference) had hoped an impressive win over Miami would not only take them a step closer to their second straight ACC title, but also give them a boost in the Bowl Championship Series standings.

Virginia Tech was in third place behind Southern California and Texas in the BCS standings, with designs on making a late-season run to the Rose Bowl.

Instead, Miami (7-1, 4-1) helped clear the clutter at the top of the BCS and ensure that Virginia Tech won’t be this season’s Auburn – perfect but left out of the national title game.

“We played with a chip on our shoulder,” said Miami quarterback Kyle Wright, who passed for 146 yards and a touchdown, despite being shaken up in the first half and missing most of the second quarter. “I’ve been saying it for the whole week down there, if we come out and play they way we should, I didn’t think they could play with us.”

The day started with five unbeaten teams in major college football, but the Hokies and UCLA fell. Texas and Alabama stayed perfect and USC was trying to do the same against Stanford.

“We were well prepared and ready to play, but they played great and we just couldn’t quite get going,” Hokies coach Frank Beamer said.

The Hurricanes were a rare 6 1/2-point underdog, and none too pleased about it. Looking for respect, they refused to be the foil in the Hokies’ national title scenario, took control of the ACC’s Coastal Division race and even made themselves a dark horse to reach the Rose Bowl.

The Hurricanes turned four lost fumbles by Vick and two interceptions into 17 points.

“One fumble slipped out of my hands,” said Vick, who had turnovers on four straight possessions in the second half. “The other fumbles was my ball security and me being reckless out there.”

Rocky McIntosh led the charge for Miami’s defense with 10 tackles, two sacks and a fumble recovery.

Pinned deep in their own territory late in the third quarter, the Hokies couldn’t hold out the Miami rush and Vick was swarmed under by Javon Nanton and company. The ball squirted loose and Kareem Brown jumped on it in the end zone to give Miami a 27-0 lead.

The score made Lane Stadium – one of the rowdiest in the country and a place where Miami lost 31-7 two years ago – sound like a library.

Vick finished 8-for-22 for 90 yards against the top-ranked defense in the country, the worst performance of his college career, by far.

“He had a lot of people in there in the backfield with him,” Beamer said.

Vick ran for a 2-yard TD in the fourth quarter, to keep the Hokies from being shut out for the first time since 1995. It was just the second time in 30 games Virginia Tech has lost with either Michael or Marcus Vick starting at quarterback.

Miami allowed 167 total yards, the fifth straight game the ‘Canes have held an opponent under 200, and had four sacks.

The loss was just the second in 30 games by Virginia Tech with Marcus or Michael Vick starting at quarterback.

Offensively, Wright and Miami were just the opposite of Vick and the Hokies – efficient and opportunistic.

Wright was 13-for-22 with an interception and a 9-yard TD pass to Darnell Jenkins in the third quarter after the Hurricanes recovered a fumbled snap by Vick.

Charlie Jones ran for 97 yards and a touchdown and the Hurricanes put up more points against the No. 1 scoring defense in the country than the last three ACC opponents combined.

Miami had lost two straight and seven of 10 to its former Big East rivals. Now if the Hurricanes win out, they’ll play in the first ACC title game in Jacksonville, Fla., on Dec. 3 against Florida State.

Miami has won seven in a row since losing the season opener at Florida State.

The ‘Canes took the crowd out of it early Saturday night with the type of defensive plays Virginia Tech usually relies on to overwhelm opponents.

The first strike came from Thomas Carroll, who came off the blind side to strip the ball from Vick in the first quarter and Miami recovered at the Virginia Tech 29. The Hokies limited the damage to a 27-yard field goal by Jon Peattie.

Miami made it 10-0 in the second quarter, putting together a 17-play, 82-yard drive that was aided by a personal foul called on Hokies defensive end Darryl Tapp, and capped off when Jones blasted into the end zone on a fourth-and-goal from the 1.

The Hurricanes lost leading rusher Tyrone Moss for the game to a sprained knee on the drive and Wright was also knocked out of action on the helmet-to-helmet hit by Tapp.