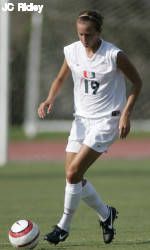 UM Set to Take on No. 8 Boston College at Cobb Stadium

CORAL GABLES, Fla. – The University of Miami women’s soccer team will welcome the newest member of the ACC to Cobb Stadium Thursday when they play host to No. 8 Boston College in Coral Gables at 7 p.m.

The Hurricanes are 5-7-1 on the year and 0-4 in ACC play. Miami will look to snap a tough five-game skid Thursday as they play in just their third home game in the past 32 days. Two of UM’s last three loses have come at the hands of teams ranked in the top 10 nationally.

Behind the play of sophomore keeper Lauren McAdam, whose 67 saves lead the ACC, the Hurricanes top the conference list in total saves, posting 71 on the year, and rank second in the ACC in saves per game with 5.46 per contest.

Playing in their first season in the ACC, eighth-ranked Boston College heads to Cobb Stadium with an overall record of 8-1-1 and a 2-1 mark in conference play after downing then eighth-ranked Duke last week.

The Eagles have only allowed three goals in 10 games this season which ranks fourth among all NCAA teams. Junior keeper Arianna Criscione has been the main force behind the Eagles this season with a 0.29 goals against average which ranks second in the league and seventh in the country.

Thursday’s game will mark the sixth meeting between Miami and Boston College, who owns a 1-4-0 record over the Hurricanes. Miami’s lone victory over the Eagles came during the 2003 season with a 3-0 win in Coral Gables – the last time Miami has faced Boston College at home.

Tickets are just $5 dollars for adults and $3 dollars for children and senior citizens. For more ticket information please contact the Hurricane Ticket Office at 1-800-GO-CANES. Fans can follow the game on the web with live scoring on www.hurricanesports.com.