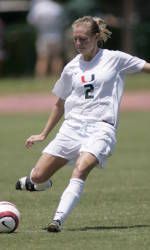 Hurricanes Hit the Road to Face a Pair of SEC Opponents

CORAL GABLES, Fla. – The University of Miami women’s soccer team will take to the road this weekend for a pair of games, traveling to Auburn, Ala. Friday night to take on Auburn 7 p.m. and head to Columbia, S.C. Sunday afternoon to square off with South Carolina at 11 a.m.

The Hurricanes take to the weekend against the two SEC opponents with an overall record of 4-2-1 coming off a scoreless tie against cross-town rival Florida International Wednesday night in their last outing.

Led by freshman Bryn Heinicke’s team-high 22 shots, three goals and eight points, Miami has out-shot opponents by an average 15.1-to-11.7 this season in their best start since 2001 – the only year UM has advanced to the NCAA College Cup in the program’s eight-year history.

Miami’s success this season has largely been attributed to defensive efforts, mainly by sophomore keeper Lauren McAdam, who has posted three shutouts in six games in net while leading the ACC with 5.67 saves per game.

After opening the season with three losses, Auburn has won or tied in two of their last three games as they host Miami in just their third home game of the season.

Friday’s game will mark just the second meeting between the Hurricanes and Tigers, who upended Miami last year in Coral Gables with a 2-1 game-winner in the 86th minute in the only previous meeting.

The Hurricanes travel from Auburn to South Carolina Sunday to face a Gamecock team that looks to snap a three-game losing streak after opening the season with three-consecutive wins.

Sunday’s game will be the first meeting between Miami and USC.