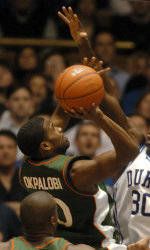 DURHAM, N.C. – J.J. Redick scored 29 points, nearly matching Miami point-for-point into the second half, in No. 6 Duke’s 83-59 victory over the Hurricanes on Thursday night.

Senior Daniel Ewing had the first double-double of his career with 14 points and a career-high 10 assists in his final game at Cameron Indoor Stadium, and Shelden Williams added 14 points and 12 rebounds for the Blue Devils (22-4, 11-4 Atlantic Coast Conference). They will finish the regular season Sunday at No. 2 North Carolina, a rematch of Duke’s 71-70 victory earlier this season.

Guillermo Diaz scored 17 for the Hurricanes (16-11, 7-9), who likely need to advance a couple of rounds in the ACC tournament to secure a bid to the NCAAs.

Redick sported a new hairstyle – he and walk-on Patrick Davidson got matching buzz cuts – then made his first two shots on his way to 18 points in the first half. He came off a double screen by Shavlik Randolph and Reggie Love to swish a jumper from behind the arc midway though the opening 20 minutes for his ninth point; at the time, Miami had only eight.

That led the Cameron Crazies to chant “J.J.’s winning!” a theme that continued through almost the entire half. Redick had personal leads on the Hurricanes at 3-2, 6-4, 9-8, 11-8, 14-11 and 16-14, but a late dry spell for the ACC’s leading scorer dropped him four points behind at the break.

Early in the second half, Redick made two free throws and his fourth 3 to move within a point of Miami, the final time he was that close. Still, he scored at least 20 points for the 19th time in only 32 minutes, well below his league-leading 37.1 minutes a game.

The Hurricanes never led and were tied only at 2, and they trailed by at least 10 points for the final 34{ minutes. That wasn’t the kind of effort coach Frank Haith was looking for, considering an improbable victory would have left Miami at 8-8 in the ACC. Normally, that mark is good enough for an at-large bid to the NCAA tournament.

With a bye during the final weekend of the regular season, the Hurricanes won’t take the court again for nearly a week, during the opening day of the conference tournament. They’ll have to get a better performance from leading scorers Diaz and Robert Hite, who combined for 28 points on 12-of-32 shooting against the Blue Devils.

That was about seven below their season average, and many of them came with the outcome already decided.