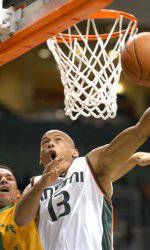 CORAL GABLES, Fla. (AP) – When Guillermo Diaz hit a 3-pointer for the MiamiHurricanes, he pounded his chest and screamed taunts in an opponent’s face.

Later, with the game on the line, Diaz backed up his brash behavior. Thetalented guard made an 8-footer with 8 seconds left to cap a comeback bysurprising Atlantic Coast Conference newcomer Miami, which won its thirdconsecutive league game Saturday, beating Florida State 64-63.

“I don’t feel any pressure,” Diaz said. “I know I can make plays at theend.”

The Seminoles led for most of the game and were up by four points with 90seconds left, but endured their 26th straight conference road loss.

After Miami forced a turnover on an inbounds pass with 34 seconds to go,Diaz made a slashing, spinning move in the lane to beat four defenders, thenmade the game-winner.

“Diaz is one of those once-in-a-lifetime-type players most coaches wouldlove to have,” Seminoles coach Leonard Hamilton said.

Florida State’s Anthony Richardson tried a 15-footer that fell short with 2seconds left, and Anthony Harris rebounded for Miami to clinch the win.

The Hurricanes (12-3, 3-1) won for the 11th time in 12 games. Picked forlast place in the league before the season, they’re instead in the thick of therace heading into a showdown at home Wednesday against No. 5 Duke.

“We know we’re a good team and can play with anybody in the country,”guard Robert Hite said.

The Seminoles (9-8, 1-3) remained winless in road league games since March2001. They lost despite a career-high 25 points by Von Wafer.

“This team does have a chance to develop into a pretty good team,”Hamilton said. “The future is bright, but the ACC is an unforgiving league.We’re going to really have to step it up a notch if we’re going to dig out ofthis little hole we’re in.”

Diaz led Miami with 19 points and plenty of emotion. He sank a 3-pointerover Wafer early in the second half, then pounded his chest and screamed inWafer’s face while retreating upcourt.

“Friendly talking,” Diaz said. “We do that just for fun to make the gamemore exciting.”

Wafer also talked trash to Diaz, and both players were admonished by theofficials.

“I tried to get in his head a little bit,” Wafer said. “That didn’t work…. He’s mentally tough. He let his game speak. My game wasn’t strong enough.So he won that battle.”

Hite scored 18 points for the Hurricanes, and William Frisby had 12 reboundsto help give them a 41-31 edge on the boards.

“This team is growing up right before our eyes,” coach Frank Haith said.

The Seminoles scored nine straight points, five by Wafer, for a 55-52 leadwith 5 minutes left. Wafer’s 3-pointer made it 61-57, but Hite answered with a3 to cut the lead to one.

Adam Waleskowski made two free throws for Florida State with 51 seconds leftfor a 63-60 lead. Harris had a chance to tie the game with 37 seconds remainingbut made only two of three free throws.

Then came the costly turnover by the Seminoles. Waleskowski’s pass fromunder the Miami basket led teammate Isaiah Swann too much, and the ball rolledout of bounds next to the Hurricanes bench, prompting a roar from the crowd of6,323.

Diaz then made his move to give Miami the victory.

“Everybody knew he was going to take it,” the Seminoles’ Andrew Wilsonsaid. “He just made a great play.”