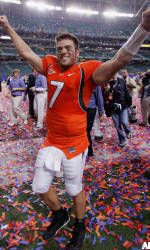 ATLANTA – The Miami Hurricanes were eliminated from the national championship early in the season and missed out on the conference championship late.

They settled for the state title Friday night.

Devin Hester returned a blocked field goal 78 yards for a touchdown, Roscoe Parrish returned a punt 72 yards for a score and the 14th-ranked Hurricanes beat No. 20 Florida 27-10 in the Peach Bowl.

“Those guys are playmakers,” coach Larry Coker said. “Team speed is one thing, but to have the ability to make people miss and score touchdowns is a knack that Roscoe and Devin have.”

This time, the Hurricanes (9-3) didn’t need a strong performance from Brock Berlin. The senior quarterback who transferred from Florida in January 2002 torched his former team in a 38-33 comeback victory last year and mocked fans after the game.

Berlin finished 13-of-23 for 171 yards Friday. He had a 20-yard touchdown pass to Ryan Moore in the third quarter that made it 24-3 and ended his career 5-0 as a starter against Miami’s two biggest rivals – Florida and Florida State.

“There’s no better feeling than beating FSU three times and Florida twice,” Berlin said. “If that isn’t big, I don’t know what is.”

Although Berlin stayed perfect against in-state competition, Miami’s special teams and defense did the most damage on New Year’s Eve.

“In big games like this, you can’t give up big plays,” Strong said. “Miami ended up getting big plays. They got the two big plays in the kicking game.”

The momentum swing set the tone for the Hurricanes, who sacked Chris Leak on the next two plays and intercepted a pass late in the second quarter. Miami put constant pressure on Leak and finished with five sacks.

“Chris was never able to get comfortable in the pocket,” Strong said. “They got tons of pressure and a lot of sacks.”

Leak overthrew O.J. Small one play after Frank Gore fumbled in Florida territory. Hester picked off the pass and snaked his way 28 yards across the field to put Miami back in field goal range. Jon Peattie nailed a 47-yarder to give the ‘Canes a 10-3 lead.

Miami forced Florida to punt on the ensuing possession, and Parrish caught the line-drive kick and ran untouched up the seam for a 72-yard score.

Strong said the special teams breakdowns might not have happened had fired coach Ron Zook been around. Zook also was Florida’s special teams coordinator.

It got worse. Leach missed a 41-yard field goal in the waning seconds of the first half that could have sparked the Gators.

“We woke up a little bit on offense in the second half,” Coker said. “We got up by three scores, and the clock became our ally.”

Still, Leak’s best pass of the game got the Gators back in it. He faked a handoff, had plenty of time and found Jemalle Cornelius wide open on a post pattern for a 45-yard score.

Leak finished 19-of-39 for 262 yards with a touchdown and two interceptions.

The comeback was short-lived.

Miami capped a 65-yard drive with Peattie’s 32-yard field goal, making it 27-10 early in the fourth.

The Gators couldn’t mount another rally – something they did so well this season.

Zook was fired Oct. 25 after a 4-3 start and an embarrassing loss at Mississippi State. Players rallied around Zook and the other coaches, winning the final three games. The streak included a victory in Tallahassee for the first time since 1987.

Zook then took the head coaching job at Illinois, former Utah coach Urban Meyer was hired at Florida and the Gators were left with an awkward coaching situation for the bowl. Three assistants agreed to join Zook, two were retained by Meyer and three have uncertain futures.

“I wish I could have had a better outcome, but it was a great experience,” Strong said. “You learn a lot about game management and focus and getting players ready to play.”

Despite all the distractions, the Gators hoped to win the Florida Cup – the state-sponsored trophy given to either Florida, Florida State and Miami in return for beating the other two teams in the same season.

Instead, the trophy will remain in Coker’s office, where it has been the last two years.

“We started playing on the same page the last three games,” said Florida’s Ciatrick Fason, who finished with 94 yards rushing on 17 carries. “But then we got right back off the page tonight, and the outcome was the same as it was early in the season.”