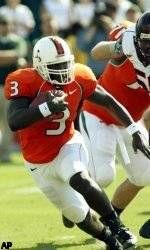 MIAMI – Bryan Randall grabbed a set of Mardi Gras beads and waved them aloft, while his teammates exalted in the prospect of a trip to New Orleans.

The Hokies beat Miami for the second straight year – and a Bowl Championship Series spot, one that Virginia Tech let slip away by collapsing down the stretch a year ago, is the reward.

Randall threw two touchdown passes, including a 39-yard strike to Eddie Royal that put Virginia Tech ahead to stay in its 16-10 victory over the Hurricanes on Saturday.

No. 10 Virginia Tech (10-2, 7-1) will learn Sunday to which BCS bowl it’s headed; the likely choice is the Sugar Bowl on Jan. 3 in New Orleans. Miami – which was bidding for a fifth straight BCS berth – will play Florida in the Peach Bowl on New Year’s Eve.

“To come into this great stadium, against a great football team and to be able to hold on and win the ACC outright is a special feeling for us,” Hokies coach Frank Beamer said. “It was their time. Things bounced our way, but I think we made things bounce our way.”

The ninth-ranked Hurricanes (8-3, 5-3) talked volumes about avenging last year’s humbling 31-7 loss in Blacksburg and making Virginia Tech pay for waving an “ACC Champions” sign on its sideline following last week’s win against Virginia that clinched a share of the conference crown.

Miami came up empty on all counts, and lost its home finale for just the second time since 1985.

“We’ve got the ACC all by ourselves,” said Randall, who completed 11 of 18 passes for 148 yards. “There’s no question who the champions are, who’s the better team or who should have won this game.”

Virginia Tech entered the game with the ACC’s top scoring defense, and thoroughly frustrated Miami’s offense. Miami quarterback Brock Berlin completed 16 of 31 passes for 139 yards – 98 off his season overage. And the Hurricanes managed only 51 yards rushing on 22 attempts.

Cedric Humes added 110 rushing yards for the Hokies, who were picked to finish sixth in the ACC before the season and won their final eight games to cap a surprising title run. They also beat Miami for the seventh time in the teams’ last 10 meetings.

Berlin threw to Talib Humphrey for 24 yards on Miami’s first play; the Hurricanes wouldn’t have another play exceed 17 yards all afternoon. Miami finished with 190 yards, only 110 coming in the final three quarters, plus a season-low seven first downs.

When the Hurricanes had chances, they were wiped out by penalties. A personal-foul flag against center Joel Rodriguez cost Miami a first down at the Virginia Tech 16 in the opening quarter, and two other big gains totaling 30 yards were voided by penalties.

“They made plays on offense when they had to, some critical times and we didn’t,” Coker said. “I think we were 1-of-12 on third-down conversions; you’re not going to win many games with those statistics.”

Virginia Tech led 10-7 at halftime, getting all of its points following Berlin’s turnovers.

Berlin was picked off by Eric Green with 3:22 left in the first quarter, a fourth-and-inches play from the Virginia Tech 35 where he tried to hit a double-covered Roscoe Parrish in the end zone. The interception was Berlin’s first in 163 attempts.

The Hokies responded with an 80-yard drive, capped by Randall’s 3-yard pass to Jeff King for the game’s first touchdown.

“We knew they’d come in worked up, but talk doesn’t get it done,” Green said. “You’ve got to do it on the field.”

Randall then fumbled deep in his team’s territory, but Berlin gave the turnover right back, getting stripped by Virginia Tech’s James Anderson, setting up a drive capped by Brandon Pace’s 45-yard field goal.

Another Randall fumble, following Roger McIntosh’s blindside hit, gave Miami the ball at the Hokies 30 early in the third quarter, and Jon Peattie’s 23-yard field goal with 7:59 left tied the game at 10.