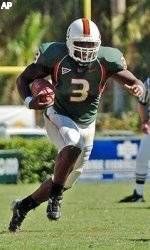 MIAMI – Knowing another loss would doom Miami’s hopes of winning theAtlantic Coast Conference, Brock Berlin quickly ensured that the Hurricaneswould stay in the thick of the title chase.

Berlin threw for a career-best 361 yards and four touchdowns in just over ahalf Saturday, leading No. 12 Miami past Wake Forest 52-7.

He set the tone for Miami’s big-play bonanza by hitting Sinorice Moss with a42-yard pass on the game’s first play, enhanced his chances of winning the ACCplayer of the year honors and – most importantly – helped Miami (8-2, 5-2) setup a Dec. 4 showdown with Virginia Tech that may decide the conference title.

“We came in this week knowing that we were going to be able to hit some bigplays if we ran good routes and threw it well,” said Berlin, whose previouscareer high was a 352-yard day last season against West Virginia. “Sureenough, we made it happen.”

Berlin completed 13 of 19 passes and threw touchdowns to four differentreceivers. In his last seven games, Berlin has completed 55.9 percent of hispasses for 1,894 yards with 19 touchdowns and only two interceptions – none inhis last 153 attempts.

“He kept us off balance,” Wake cornerback Marcus McGruder said. “They rangreat routes. He threw the ball on the money and they made big plays.”

Berlin – who threw for 201 yards in the first quarter alone, eclipsing thetotal yards he managed in 11 of his first 21 Miami starts – left with 8:50remaining in the third quarter, after hitting Ryan Moore with a 10-yardtouchdown pass that put Miami ahead 42-7.

“We said, ‘When they give us an opportunity, let’s finish it,”‘ Berlinsaid. “And that’s what we did.”

Frank Gore rushed for 83 yards and a touchdown, and Rashaun Jones recovereda blocked punt in the end zone for another Hurricanes’ score. Miami outgainedWake Forest 579-193.

“We’ve been down a little bit, but we’re not out,” Miami coach Larry Cokersaid. “They fought their way back and we’re still in a good situation. …We’re down to a one-game season now.”

Chris Barclay had a nifty 14-yard touchdown run late in the first half forWake Forest (4-6, 1-6), which hadn’t lost a game by more than seven points allseason.

Barclay – who entered the game as the ACC’s leading rusher – finished with57 yards on 18 carries for Wake Forest, which won’t reach a bowl game for thefourth time in five years.

“They were definitely a different team than they were against Carolina andClemson,” Barclay said, referring to Miami’s two conference losses thatknocked the Hurricanes from the national title picture. “Those guys wereplaying with a purpose. They were out there making a statement.”

The win kept alive Miami’s hopes of making a fifth straight appearance inthe Bowl Championship Series. To claim the ACC crown, the Hurricanes need tobeat Virginia Tech, then get some help to win potential three-way tiebreakerswith Florida State and either Virginia or the Hokies.

Miami scored touchdowns on its first three possessions. By halftime, Berlinconnected on seven passes of 20 or more yards – including a 39-yard touchdownpass to Roscoe Parrish on the game’s third play, a 56-yard scoring strike toLance Leggett that put Miami up 28-0, and a 52-yarder that Parrish grabbed toend the half.

“We spent the week working on the patterns we missed last week,” saidParrish, who had five catches for 141 yards. “We worked a lot in practice andit paid off big today.”

Said Wake Forest coach Jim Grobe: “Their receivers are special, but Berlingot them the football.”

Wake Forest – whose five previous losses were by a combined 30 points -managed only 36 yards passing and punted eight times. The Demon Deacons’ beststarting field position was their own 28.

“When they wanted to go on top, they did,” Grobe said. “They got usreeling in the first half. I’m so impressed with their speed. They just ranaway from our guys.”