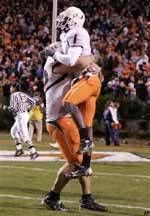 CHARLOTTESVILLE, Va. (AP) – Roscoe Parrish returned a punt for a touchdownand caught a clinching touchdown pass in the final minute Saturday as Miami gotback into the ACC title race by beating No. 10 Virginia 31-21.

Frank Gore ran for 195 yards and a touchdown for the No. 18 Hurricanes.

Parrish took a punt at his own 38 with just over 7 minutes left, cut acrossthe field and then down the sideline to make it 24-14. He later grabbedBerlin’s pass in the right corner of the end zone with 51 seconds left tocomplete the victory.

The Hurricanes (7-2, 4-2) ended a two-game losing streak and put themselvesback in position to win the league title and its Bowl Championship Series bidwith victories in their last two games. They play Wake Forest next weekend andVirginia Tech on Dec. 4, both in Miami.

The Cavaliers (7-2, 4-2) started the day tied with No. 16 Virginia Tech forfirst in the ACC and in control of their destiny, but fell back for the secondtime after losing to a team from Florida in a big game. Almost a month ago,they lost 36-3 at Florida State.

A 47-yard run by Marques Hagans highlighted a four-play, 79-yard drive toget the Cavaliers within 24-21 with 3:19 left, giving a record crowd of 63,701at Scott Stadium hope that an amazing comeback was in the offing.

But Brock Berlin hit Talib Humphrey for 44 yards on a third-and-5 from theMiami 35, and Berlin finished the drive with the scoring pass to Parrish.

Berlin was 18-of-33 for 177 yards, including a 3-yard scoring throw toHumphrey in the second quarter. The Hurricanes also had a number of drops, themost glaring by a wide open Lance Leggett in the end zone.

Gore scored on an 11-yard run with 36 seconds left in the first quarter toget the Hurricanes on the board. The Cavaliers tied the game when Miller made adazzling one-handed grab on Hagans’ pass in the back corner of the end zone.

Berlin’s scoring pass to Humphrey made it 14-7 at halftime.

Hagans went just 10-of-25 for 94 yards, and his wide receivers had one catchfor 4 yards. Pearman finished with 106 yards on 21 carries.