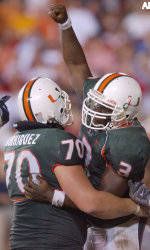 MIAMI (AP) – The Louisville Cardinals drew a flag for excessive celebration in the second quarter, and another in the third. Against Miami, the displays of jubilation were premature.

Led by Brock Berlin and Devin Hester, the third-ranked Hurricanes erased a 17-point deficit over the final 20 minutes and came from behind twice in the fourth quarter to beat No. 18 Louisville 41-38 Thursday night.

“We kind of got ourselves in a hole,” Berlin said. “Some things weren’t working. But we proved what type of character our team has.”

Stefan LeFors threw three touchdown passes for the Cardinals before being sidelined with a concussion in the fourth quarter.

“This is the type of game that puts the Louisville program on the map,” said Tiger Jones, who caught two touchdown passes for the Cardinals (4-1).

They had touted the game as perhaps the biggest in school history and rose to the occasion. The Hurricanes (5-0) narrowly averted only the second loss in their past 30 games at the Orange Bowl to remain in the race for their sixth national championship since 1983.

“A tremendous win,” coach Larry Coker said. “The guys didn’t flinch. They didn’t give up. Our guys really, really fought to the end.”

Much of the credit belonged to Berlin, the target of boos when Miami fell behind in the first half. He suffered a bruised chest in the second quarter but didn’t miss a play and finished 25-of-37 for 308 yards, including a completion on fourth-and-4 to keep the winning drive alive.

“I was hurting pretty good,” Berlin said. “But I never considered coming out of the game.”

He threw touchdown passes of 9 yards to Greg Olsen, 14 yards to Roscoe Parrish and 11 yards to Akieem Jolla. Miami scored on all six possessions in the second half.

But Brohm had the Hurricanes worried until the final play. The game ended with an interception of his Hail Mary pass from midfield, and then a shoving match between the teams.

“We’re hurting and we’re down,” Louisville coach Bobby Petrino said. “Anytime you go out and compete as hard as you can and lose, it hurts.”

Petrino used multiple wideouts – sometimes with an empty backfield – to spread out the Hurricanes and kept them guessing, even trying a flea-flicker in the first quarter that fell incomplete. In the open field the Cardinals were fast enough to match Miami’s vaunted speed, to the alarm of the crowd of 63,715.

The Hurricanes trailed 24-7 at halftime and 31-14 late in the third quarter. An early goal-line stand suggested the Cardinals meant business, and 24 consecutive points in the first half confirmed it.

“We thought they would roll over and die, but they didn’t,” Miami center Joel Rodriguez said. “We found out they’re a tough team too.”

LeFors went 17-of-22 for 244 yards. Lionel Gates scored three times and ran 39 yards on a fake punt to set up a score for the Cardinals, who totaled 507 yards against a defense that had given up only one touchdown in its first four games.

But in the second half the Hurricanes were the more unstoppable team, and Berlin directed consecutive scoring drives of 76, 66 and 87 yards to cut the deficit to 31-24. The Cardinals then committed their first turnover when LeFors fumbled a snap on his final play, setting up Jon Peattie’s second field goal to make it 31-27 with 12 minutes left.

When the highly touted Brohm entered the game for the first time, Miami forced a punt. Hester found a seam up the middle to score untouched – his third touchdown on a punt return this season.

“What can you say about Devin Hester?” Coker said. “He’s certainly one of the most exciting players I’ve ever seen. He makes fast players look slow.”

Then it was Hester’s turn again. He twice reversed his field on a 34-yard kickoff return to start Miami at the 44. Kerry Rhodes dropped a potential interception that might have sealed the win for Louisville, and on fourth-and-4 at the 8 with 1:52 left, Berlin hit Darnell Jenkins for 5 yards and a first down.