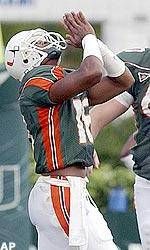 MIAMI – Freshman Tyrone Moss ran 16 times for 91 yards in the second half, and the 14th-ranked Hurricanes rebounded from their first two-game losing streak in more than four years to beat Syracuse 17-10 on Saturday.

Moss gave the offense a spark after it scored just one touchdown in losses to Virginia Tech and Tennessee.

“Tyrone’s going to get a lot of carries,” coach Larry Coker said.

The Hurricanes (8-2, 4-1 Big East) altered their offensive philosophy against the Orangemen – taking a page from the teams that beat them.

They ran the ball 49 times, hoping to eliminate turnovers while relying on the defense – which has played well the last eight games.

Miami significantly outgained the Hokies and Volunteers, but lost both games because of a combined eight turnovers and 26 penalties.

“You’d be surprised how much one win can change our outlook,” safety Maurice Sikes said. “Getting this win gives us a whole different attitude.”

After Kellen Pruitt partially blocked a punt, Syracuse (5-4, 2-3) got the ball back on the Miami 44 with 2:58 to play. But Miami’s defense – which played well in the two losses – stopped the Orangemen on fourth-and-8 from the 20.

Sikes knocked down R.J. Anderson’s pass to Johnnie Morant in the left corner of the end zone with 52 seconds remaining.

Derrick Crudup ran out the clock from there.

Crudup, starting in place of Berlin, was mediocre in his first career start. He was 5-of-13 for 80 yards with a touchdown, an interception and a fumble. He also ran 14 times for 29 yards.

“I think I can do much better than I did today,” Crudup said. “But we got the win. That’s all that matters.”

Berlin played one series Saturday. He misfired on his only pass, was sacked once and never returned.

Crudup probably will keep the starting job next week against Rutgers.

His best throw came in the first quarter, when he faked left and hit Ryan Moore down the right sideline for a 45-yard score and a 7-3 lead.

“He did some good things,” Coker said. “He was a little rusty with some things, but I was really pleased with the way he competed.”

After falling behind 10-7 at halftime, Miami turned to Moss. His biggest runs came on Miami’s final scoring drive.

Moss used a great move to break a 26-yard run. He then ran over Anthony Smith and carried Rich Scanlon into the end zone for a 9-yard score.

“They stopped throwing the ball around,” Syracuse coach Paul Pasqualoni said. “They came right at us. I thought one of the biggest factors was the yardage Moss made. He made yards after the initial contact.

Syracuse scored all its points off Crudup’s two turnovers in the first half. Walter Reyes led the Orangemen with 89 yards on 24 carries.

After Miami’s third turnover – a fumble by Winslow on his only catch – Miami stopped throwing the ball and relied on its defense.