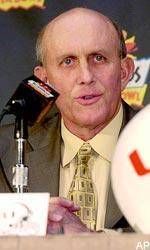 Coker and Ohio State coach Jim Tressel were in Arizona on Thursday to talkabout the Jan. 3 national championship showdown in Tempe.

“When it comes to a one-game playoff, which is what we’re in right now, Idon’t think it matters a great deal who is the favorite or who is theunderdog,” Coker said. “What matters is how you play on game night.”

He used last season’s Super Bowl as an example.

“The Rams were heavy favorites against New England. New England had nochance to win the game, but they did,” Coker said.

The No. 2 Buckeyes are 13-0 but won six games by a touchdown or less.Tressel said the Buckeyes are shrugging off the underdog role.

“I think our young people are confident that if they play well, they’llhave a great showing for themselves,” he said. “While they know that Miami isa great football team, I don’t think they spend too much time looking at thespread. … There’s two teams left that are unbeaten, and in my mind that’smore the story line than the spread.”

Ohio State plans to arrive in Phoenix on Dec. 26 and Miami on Dec. 27.Despite the magnitude of the contest, both coaches want their players to enjoytheir time in Arizona.

“The fact that it’s for a national championship, I would like to think thatwon’t steal away from the great experience that they’ll have,” Tressel said.

Tressel said he is modeling his Ohio State program after Miami’s. He spent aday at Miami watching spring practice this year.

“Whatever business you’re in, you want to study the people who do itbest,” he said. “Miami has done it so well for so long, and they were niceenough to let us come and visit.”

The Buckeyes, who have not won a national title since 1968, will send tensof thousands of fans to Arizona, many of whom will be scrambling for tickets atthe sold-out game.

At Miami, winning is simply expected, no matter how many fans for theopposing team are watching. The Hurricanes beat Nebraska 37-14 for the nationalchampionship last season in front of a sea of red in the Rose Bowl.

“For whatever reason, we’ve played extremely well on the road,” Cokersaid, “sometimes in hostile environments. We’ve done a good job, I think, ofreally keeping it within the confines of the fields.”

Miami, 12-0 this season, has won 34 in a row, the last 24 of them with Cokeras head coach. Giving a losing postgame speech would be a new experience forhim.

“We really don’t talk about losing. We talk and prepare for winning,”Coker said. “But inevitably it will come sometime. When it does, we’ll thinkof something to say, hopefully something classy.”