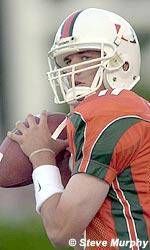 CORAL GABLES, Fla. (AP) – The Miami Hurricanes have had two Heisman Trophy winners in their history. Now they have two candidates in the same backfield.

Ken Dorsey began the season as a front-runner for the award given annually to the nation’s most outstanding collegiate player, and Willis McGahee has worked his way into the mix with seven 100-yard games and a school record-tying 17 rushing touchdowns.

Both players would like to be named finalists for the award, gaining a trip to New York for the Dec. 14 presentation, and both would like to see Dorsey to win it.

“As long as it stays between one of us I don’t care, but I’m not expecting to get it,” McGahee said Monday. “I think Dorsey should get it.”

“It would be a huge honor,” Dorsey said. “For me the biggest honor is just being able to go to the awards banquet and being a part of that. If you win it, that’s just a whole new level of excitement. It’s a big honor just to be mentioned in that group.”

Dorsey and McGahee used to joke about winning the Heisman Trophy before the season. They would randomly call each other “Heisman” after big plays on the practice field. But the banter stopped once the season began and the top-ranked Hurricanes (9-0, 4-0 Big East) started to focus on defending their national championship.

Now they don’t even talk about. They do think about it, though, and both will get a chance to state their case nationally Thursday night against No. 17 Pittsburgh (8-2, 5-0).

“It would be great – two University of Miami players going up as finalists,” McGahee said. “I would just be glad to be nominated, just happy to be there.”

The 6-foot-1, 224-pound sophomore has been the catalyst for the Hurricanes in many games this season, compiling more than 165 yards of offense against Florida, Temple, Boston College, Florida State, West Virginia, Rutgers and Tennessee.

“I think the highlight reels pretty much speak for themselves with Willis,” Dorsey said. “When you need a big play, he’ll come up with it.”

McGahee has the numbers, but lacks Dorsey’s notoriety.

Dorsey, a three-year starter at Miami, has broken just about career passing record at Miami and replaced former Heisman Trophy winners Vinny Testaverde (1986) and Gino Torretta (1992) atop the charts. This season, he has thrown 21 touchdowns and eight interceptions and has a career-low 54.5 completion percentage.

The numbers might be questionable, but his leadership isn’t. The Hurricanes are 35-1 with Dorsey as a starter, including 31 consecutive victories.

“I don’t have too many Heisman moments,” Dorsey said. “I’m not ripping off 90-yard runs or catching touchdown passes. I throw 10-yard completions and let my guys make plays. That’s what I do, and I understand that. That’s a role. I love throwing deep balls, but it’s not really a spectacular deep ball unless you run around a few times and then throw it off your back foot. It’s just part of life.

“My biggest thing is winning games and that’s all I’m about, no matter how we do it. I just do whatever I can to make this team successful. I think I’ve done pretty well for myself.”

If Dorsey and McGahee are finalists, they would be the first teammates to make the trip to New York since 1994, when Penn State running back Ki-Jana Carter finished second and quarterback Kerry Collins finished fourth behind Colorado running back Rashaan Salaam.

Nebraska running back Mike Rozier is the last player to win the Heisman Trophy with a teammate finishing in the top five. Rozier won in 1983, and quarterback Turner Gill finished fourth.

“To have two players on the same team being recognized as possible candidates is just phenomenal,” Miami coach Larry Coker said. “Maybe they both will get to go to New York city and hopefully one of our players will win.”