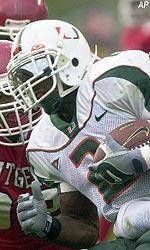 Dorsey And Hurricanes Have Record-Setting Day

PISCATAWAY, N.J. – The Miami Hurricanes are making a habit of playing close games. Whether the latest one hurts them in the polls remains to be seen.

For the third time in as many games, the top-ranked Hurricanes had to rally to win. This time, This time, lowly Rutgers put a fright into them, taking a 17-14 lead into the fourth quarter before Ken Dorsey led them to a 42-17 victory.

Despite injuring his non-throwing hand, Dorsey completed a 20-yard touchdown pass to Andre Johnson early in the fourth quarter, then added a 1-yard TD pass to Kellen Winslow.

The ‘Canes added two more touchdowns in the final eight minutes to push their winning streak to 30, a school record.

“I don’t think we ever thought we were going to lose the football game,” Miami coach Larry Coker said.

Willis McGahee added 187 yards rushing and two scores for Miami (8-0, 4-0 Big East), and became the seventh back in school history to reach 1,000 yards in a season, even though he re-injured a toe on his right foot. He has 1,034 yards this season, sixth in school history.

Miami struggled for three quarters against the Scarlet Knights (1-8, 0-5), much like the ‘Canes did against West Virginia and Florida State. Last week, they were tied at 17 with the Mountaineers in the third quarter before winning 40-23. Against Florida State, Miami won 28-27 when Seminoles kicker Xavier Beitia missed a 43-yard field goal on the final play.

“We always seem to pull things out at the end of games,” Miami center Brett Romberg said. “At the end, (Rutgers) seemed to fall apart.”

Miami broke the school record for consecutive victories set by Dennis Erickson’s teams. Back then the ‘Canes won 29 straight from Oct. 27, 1990 until they were beaten by Alabama in the Sugar Bowl on Jan. 1, 1993.

Dorsey, who left for one play in the third quarter after being taken into the locker room to have his left wrist bandaged, kept his composure after struggling throughout the game.

The senior now is the Big East career leader with 78 touchdowns, breaking the mark Syracuse’s Donovan McNabb set from 1995-98. He also set the league record for completions, breaking Marc Bulger’s record. He finished 16-of-31 for 192 yards and left the game in the fourth quarter, but he said his wrist is “just fine.”

“When you’re not ahead in the fourth quarter, that’s a pretty good indication that you’re in danger of not winning,” Dorsey said. “We had to really make sure to fight back and really start executing.”

The turning point could have been Rutgers’ fake field-goal attempt with about three minutes left in the third quarter. With a 17-14 lead, Ryan Sands lined up for a 27-yard field goal on fourth-and-5.

But holder Sean Carty tried to run for the first down. He was stopped by Jonathan Vilma for no gain, and Rutgers lost a chance to extend its lead. Coker said that play “helped the momentum.”

Then Miami began its scoring barrage. After starting at the Rutgers’ 38-yard line, it took 45 seconds for Dorsey to throw his TD pass to Johnson. On Rutgers’ next possession, Kelly Jennings intercepted a pass from Ted Trump to set up Winslow’s touchdown on fourth-and-goal from the 1-yard line.

After struggling to beat West Virginia, the Hurricanes lost two first-place votes in the Associated Press poll could be in danger of losing more this week. Coker and the Hurricanes are not concerned with their standing in the rankings.

“There’s no doubt we’re the No. 1 team in the country,” Coker said. “We played a close game, but a lot of teams play close games.”

The Hurricanes’ misery started on the opening possession, when Clarence Pittman scored on a 1-yard touchdown run to cap an 80-yard drive and give Rutgers a 7-0 lead. True freshman Ryan Hart made his first career start at quarterback and went 3-of-3 for 64 yards on the drive.

It was Rutgers’ first touchdown against the Hurricanes since 2000, and the first time they led against Miami since going up 7-0 in the first quarter of an eventual 56-21 loss on Oct. 14, 1995.

Rutgers went ahead 17-8 with a little over two minutes remaining in the first half when Jason Nugent blocked Freddie Capshaw’s punt and Shawn Seabrooks ran the ball in 2 yards for a touchdown.