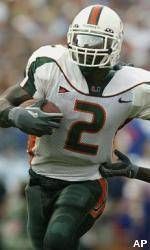 Coral Gables, Fla. (www.hurricanesports.com) — – Three Miami players have earned weekly awards from the BIG EAST after the Hurricanes’ 41-16 victory at Florida. Sophomore running back WILLIS McGAHEE has been named Offensive Player of the Week, the league announced. Junior defensive back MAURICE SIKES earned defensive honors, while senior placekicker TODD SIEVERS captured Special Teams Player of the Week. The sweep by UM is the first time since 1995 (Rutgers) that one team has won all three weekly awards outright.

McGahee (Miami, Fla.) rushed 24 times for 204 yards against the Gators, both career highs. The sophomore averaged 8.5 yards, with a long run of 39 yards. It was the fourth-best rushing total in Miami history and the fourth time a UM player has surpassed the 200-yard mark. The total was the first 200-yard effort for a Hurricane running back since 1998 (Edgerrin James). McGahee also added one reception for 10 yards.

Sikes (Miami, Fla.) recorded the game’s key defensive play when he intercepted a Rex Grossman pass at the 3-yard line with Miami ahead, 27-16, in the third quarter. He then returned the pickoff 97 yards for a touchdown. It tied for the fourth-longest interception return in BIG EAST history and fifth-best in Hurricane annals. Sikes also had a second interception in the fourth quarter and added four tackles and two pass break-ups.

Sievers (Ankeny, Iowa) scored 11 of the Hurricanes’ points in the Florida victory. The senior placekicker connected on two field goals, including a 53-yarder to open the scoring. That kick tied for the second-longest in BIG EAST history and was the fourth-best at UM. He also had eight kickoffs. Five were touchbacks, with none returned further than the 30-yard line. It is the third time in his career that Sievers has won weekly honors.