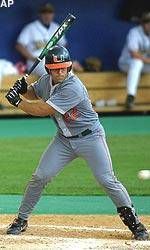 Gainesville, Fla. (www.hurricanesports.com) – – The third-seeded Miami Hurricanes (31-26) opened up the 2002 NCAA postseason with a 9-1 victory over No. 2 seed Florida International (41-19) in front of 1,120 fans Friday afternoon at the NCAA Gainesville Regional at Alfred A. McKethen Stadium on the University of Florida campus.

UM reliever Vince Bongiovanni (1-4) picked up his first collegiate victory after going the game’s final 5.0 innings with two hits, one earned run, two walks and four strikeouts in 72 pitches thrown. Bongiovanni started the game after a 3-hour and 35-minute rain delay that ended a stellar start by Dan Touchet.

Touchet pitched a two-hit shutout over the first 4.0 innings before the game was halted. He gave up no walks with three strikeouts in 54 pitches.

Miami will play the winner of Friday night’s Florida/Bethune-Cookman game on Saturday at 3:30 p.m.

UM out-hit FIU in the game, 12-4, while committing no errors to FIU’s four.

The win extended the Hurricanes streak to a season-high six games, while Miami won its 10th postseason game dating back to last season’s nine-game sweep to the College World Series title. UM has also beaten FIU in all four all-time games during the postseason.

The Hurricanes opened the scoring in the top of the first, 1-0, on Kevin Howard’s two-out RBI double to right center that scored Paco Figueroa from second. Paco Figueroa led off the game reaching on a fielding error by the second baseman then stole second. The double, Howard’s career 64th, moved him one of the school-record held by Jose Trujillo (65, 1985-88).

Miami extended its lead, 2-0, in the third on Javy Rodriguez’ two-out RBI double to left center that scored Danny Figueroa from second. Danny Figueroa led off the inning with a walk and moved to second on a wild pitch.

Miami would bat around in the order in the fourth resulting in five runs to surge ahead of the Golden Panthers 7-0. The final four runs of the inning would come on two outs. Danny Matienzo led off with a solo home run to right field. Jim Burt and Matt Dryer would then record the first two outs of the inning. Kevin Mannix kept the inning alive as he drew a walk. Danny Figueroa then singled to centerfield to put runners on first and second. Paco Figueroa followed with a RBI single to left field scoring Mannix, with Danny Figueroa going to third. Brad Safchik loaded the bases on another walk. The second run came in when as Rodriguez drew the bases-loaded RBI walk. Banks was then removed for Taylor, who allowed Howard to hit an infield single to second base that scored Paco Figueroa and Safchik.

UM added two more runs, 9-0, in the eighth on two hits and two errors. Mannix reached on a throwing error by the shortstop to lead off the inning. He was replaced with pinch runner Richard Giannotti. Giannotti then moved to second off a Taylor wild pitch. He would move to third on Danny Figueroa’s single through the left side. Giannotti ended up scoring on a throwing error by the catcher trying to catch Danny Figueroa stealing second. Paco Figueroa followed with a single to right field putting runners on the corners. Safchik was then hit by a Taylor pitch to load the bases. Danny Figueroa scored the second run of the inning of Rodriguez’ double-play ground out.

Hector Nunez ended the shutout in the eighth, 9-1, with his solo home run to left center off Bongiovanni.

Miami’s 2002 NCAA tournament appearance can be heard over the Internet at www.hurricanesports.com, or on the student voice of the Hurricanes, WVUM 90.5 FM. Additionally, the flagship stations of the Miami Hurricanes, Sports Radio 560 WQAM and UM’s Spanish Broadcast Network will also be covering the action. WQAM 560 AM will air the Saturday game, until the Florida Marlins broadcast begins at 6:30 p.m., then make the switch to WAXY 790 AM.

For more information on the NCAA Regionals, visit ncaa.org

Game Notes:
— Howard’s double in the first inning was his team-leading 22nd on the season, tying for 7th all-time in a single season. Howard also had a team-best 22 doubles as a freshman in 2000. He led the team, as well, in 2001 as a sophomore with 20 doubles. Additionally, the double moved him with one of the school-record held by Jose Trujillo (65, 1985-88).
— Matienzo’s fourth-inning solo home run was his team-high 15th of season. The shot to right field was also his career No. 37, keeping him in No. 8 all-time at UM, one behind Charles Johnson (38, 1990-92). The home run was also Matienzo’s eighth in the postseason over the last three seasons. Matienzo hit two as a freshman in 2000, along with five in 2001 as a sophomore.
— Howard’s fourth inning RBI single was his 250th career hit. Howard remains in sixth place all-time at UM, behind Randy Guerra (252, 1976-79).
— The victory marked the Hurricanes 10th straight in the postseason dating back to the 2001 NCAA tournament where UM swept through nine games en route to the CWS title. The win also tied UM’s 2002 season-high six game win streak.
— UM moves to 4-0 all-time over FIU in the postseason.
— UM leads the series with FIU 83-20 dating back to the 1973 season, including a 22-10 mark under Head Coach Jim Morris. The victory also tied the season-series between the two schools at 2-2. UM is also 119-37 all-time against schools currently in the Sun Belt Conference.
— Howard’s two-out double in the first that gave the Hurricanes a 1-0 lead, which they never relinquished, was his team-high eighth game-winning hit of the season.
— The Friday night victory over FIU was UM’s first in a Friday road contest since defeating FIU, 6-2, in the opening game of the 2002 Homestead Challenge on Feb. 22.
— UM has won its first game of the NCAA Regional the last six seasons and 24 out of 31 postseason openers all-time.
— UM is now 91-30 (.752) in NCAA regional play all-time, as well as 27-20 (.574) in regional road games. UM has a 139-62 (.692) all-time postseason record.