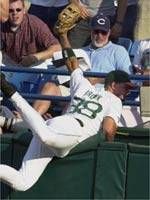 Hurricanes Hold On For 4-3 Win Over Trojans In CWS

Greg Lovelady had a two-run double for Miami (51-12), which will play againThursday against USC or Tennessee, which play in an elimination game Tuesdaynight.

USC, which blew a great scoring opportunity in the seventh inning, hadrunners first and second with two outs in the ninth, but Huguet got AlbertoConcepcion to pop out to right and end the game.

Concepcion and Josh Persell each homered for the Trojans (45-18), who hadwon seven straight.

The Hurricanes took the lead on Jimerson’s homer off Rik Currier (12-2) andnever gave it up, thanks to Jimerson’s leaping catch that robbed Brian Barre ofa homer in the top of the fifth. The speedy center fielder timed his jumpperfectly and, with his head and shoulders above the 7-foot wall inright-center, pulled the ball back.

The play seemed to revive the offense for the Hurricanes, who had just twohits through the first four innings.

Kevin Brown led off the bottom of the fifth with a double, Kris Clute walkedand both runners advanced on a wild pitch. Lovelady drove them both in with adouble down the third-base line and he scored on a two-out single by JavyRodriguez.

Concepcion and Pursell got USC back into the game with home runs in thesixth. Concepcion led off with a shot to left, then with Anthony Lunetta onfirst and one out, Pursell launched one that cleared the bleachers in left tocut the lead to 4-3.

Southern California blew a great opportunity to tie it or take the lead inthe seventh. Davidson led off with a walk and went to second on Barre’s doubleto right. But Davidson was thrown out at home on a fielder’s choice andLovelady threw out Barre when he tried to steal third.

Walker got out of a huge jam in the first after walking Barre andConcepcion, then hit Lunetta with a pitch to load the bases for Bill Peavey,who grounded into a double play.

Jimerson also homered to lead off the Hurricanes’ 21-13 win over Tennesseeon Saturday.