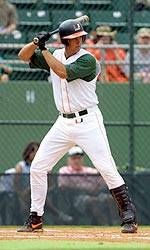 Miami Advances To Regional Final With Win Over Florida

Miami now has won ten consecutive games dating back to May 5. The Hurricanes have won 13 straight games over Florida at Mark Light Stadium dating back to February 2, 1996.

Hurricane shortstop Javy Rodriguez led UM offensively going 3-4 with three RBI. He recorded his 59th, 60th, and 61st stolen bases of the season. He is one steal shy of the UM record of 62 set by Orlando Gonzalez in 1974.

The Hurricanes opened the scoring with two runs in the fifth inning. First baseman Kevin Brown and catcher Mike DiRosa each walked to lead off the inning. Following a pop out by centerfielder Charlton Jimerson, left fielder Mike Rodriguez walked to load the bases. Jay Belflower then relieved Hart for Florida. With shortstop Javy Rodriguez at the plate, UF catcher Brian Rose allowed a passed ball which advanced the base runners scoring Brown. Javy Rodriguez then drove in DiRosa with a ground out to third.

Florida scored two runs in the eighth as shortstop Kevin Estrada scored on a wild pitch and second baseman Matt Kiger scored on an RBI-single by left fielder Jason Dill.

In the top of the ninth, the Hurricanes added an insurance run on an RBI-single to left field by Javy Rodriguez scoring Jimerson.