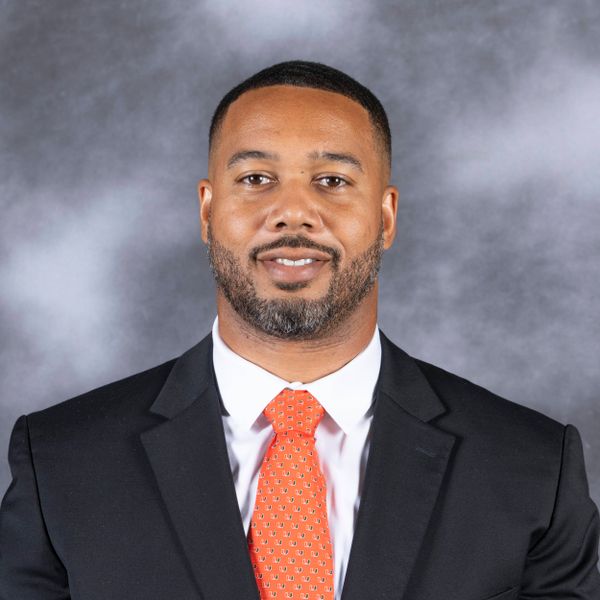 Rod Wright is in his first season as a member of the Miami Hurricanes Football coaching staff, where he serves as defensive ends coach.

Wright spent four seasons in the NFL after a standout career at the University of Texas, including three seasons with the Miami Dolphins (2006-2008), before embarking on his coaching career.

“I’m fired up to add Rod Wright to our defensive staff,” head coach Mario Cristobal said upon Wright’s hiring. “The Hurricanes are committed to dominating in the trenches, and Coach Wright will be a gamechanger for our defense. His career in the NFL and his college coaching experience have helped mold him into one of the nation’s top developers of talent and best recruiters. He will make an impact on our program’s identity when it comes to mental and physical toughness, and I’m excited to watch him elevate our culture.”

“I’m extremely excited to be here. To be able to join a program with the tradition of being a national champion and a big-time powerhouse football place like this, I was honored to even be considered as somebody that was deserving to be here,” Wright said upon his hiring. “Coach Cristobal being interested at all was humbling. Knowing who he is as a head coach and the staff that he has put together, it has been an honor to join this place.”

In his first season as co-defensive coordinator at UTSA in 2021, Wright helped the Roadrunners emerge as one of the best in the FBS in creating turnovers with 25 takeaways to rank 10th in the nation. UTSA also finished the campaign ranked 14th in the country in rushing defense (114.7) and fourth nationally with 14 fumble recoveries. The defense recorded 88 tackles for loss on the year including a school-record 33 sacks with first-team all-conference performer Clarence Hicks setting the pace with a program-record 10.5 sacks.

Wright helped guide UTSA to several single-game program records in 2021. The Roadrunners posted the first two shutouts in school history with a 54-0 rout of Lamar and a 45-0 blanking of Rice in which UTSA limited the Owls to 102 total yards, the fewest allowed in a game. For the season, the defense held four opponents to fewer than 200 yards. Seven teams failed to gain 100 yards on the ground and three offenses posted 52 or fewer passing yards against the Roadrunners.

Under Wright’s tutelage, Jaylon Haynes garnered second-team all-conference honors on the defensive line, while Brandon Brown earned honorable mention recognition and a spot on the C-USA All-Freshman Team. A total of 10 defenders were chosen for the All-Conference USA Team. The defense helped UTSA to a 12-2 record in 2021, the most wins and best winning percentage (.857) in program history. The Roadrunners won their first conference title with a 49-41 victory over WKU in the C-USA Championship Game, were nationally ranked (as high as No. 15) for the first time and made their second straight and third overall bowl appearance when they met San Diego State in the Tropical Smoothie Cafe Frisco Bowl.

In 2020, Wright helped coordinate the UTSA defense during the last two months of the season. UTSA led C-USA in sacks (25), tackles for loss (85), interceptions (11), takeaways (19) and turnover margin (+7). In fact, the Roadrunners ranked in the top 30 nationally in five categories — 19th in turnovers gained, 23rd in passes intercepted, 25th in fumbles recovered (8), 26th in turnover margin and 29th in tackles for loss per game (7.1).

In his first year with the Roadrunners, Wright’s defensive line helped UTSA break three of the program’s single-season records and one single-game mark. The defense shattered the previous standard for tackles for loss in a season with 96 and also set new marks for sacks (2.2) and tackles for loss (8.0) per game. UTSA led Conference USA and ranked sixth nationally in tackles for loss per game. The Roadrunners also eclipsed the program’s single-game TFL standard with 12 in the season finale against Louisiana Tech. Three of his defensive linemen — defensive ends Eric Banks and Jarrod Carter-McLin, as well as Haynes — were named honorable mention All-Conference USA.

Wright, a former All-America defensive lineman at Texas, came to San Antonio from East Carolina, where he was the Pirates’ defensive line coach for the 2018 season. The defense broke the American Athletic Conference (AAC) single-game record for tackles for loss with 15 against Old Dominion and eclipsed the school and league single-season marks with 105 TFL that season.

Prior to his time at East Carolina, Wright spent four years at Sam Houston State. During his tenure, the Bearkats posted a 46-12 overall record, a 31-4 Southland Conference mark, reached the semifinals of the NCAA Division I Football Championship Subdivision (FCS) playoffs three times and the quarterfinals in another year. He also helped Sam Houston State to a pair of conference titles and top-five national ranking all four seasons.

Under Wright’s tutelage, Sam Houston State defensive lineman P.J. Hall earned a spot on more than 10 All-America teams, including the Associated Press squad. He was a three-time finalist for the Buck Buchanan Award, which is symbolic of FCS Defensive Player-of-the-Year honors. He ranked among the nation’s top 10 with 19.0 tackles for loss as a senior and finished his career with a school- and FCS-record 84.0 TFLs before being selected by the Oakland Raiders in the second round of the 2018 NFL Draft.

Wright was invited to participate in the prestigious NFL Bill Walsh Diversity Coaching Fellowship during the summers of 2016 and ‘17, observing and learning in camp with the Seattle Seahawks and San Francisco 49ers, respectively.

Prior to joining the Sam Houston State staff in February 2014, Wright worked a combined three seasons as a student assistant and defensive special assistant for Texas beginning in 2011.

A standout defensive lineman for Texas from 2002 to 2005, Wright collected All-America and All-Big 12 honors played a key role to help UT capture the 2005 BCS National Championship at the Rose Bowl. In all, he enjoyed seven bowl appearances as either a player or coach while with the Longhorns. He was named 2002 Big 12 Defensive Freshman of the Year and was a first-team selection for both the Football Writers Association of America and Sporting News Freshman All-America units.

Wright was a two-time winner of the Longhorns’ Outstanding Defensive Lineman Award in 2003 and ‘04 and he earned all-conference honors in each of his final three seasons. He was a Lombardi Award finalist and an AP and Walter Camp First-Team All-American in 2005.

Drafted by the Miami Dolphins, Wright played four years in the NFL for the Dolphins. He later suited up for the Saskatchewan Roughriders of the Canadian Football League and the Dallas Vigilantes of the Arena Football League. As a prep athlete at Alief Hastings High School in Houston, he was a Parade All-American and an all-state performer.

Wright earned a bachelor’s degree in education from Texas in 2011.  Wright and his wife, Kara, were married in 2019. He has three sons, Elijah and twins Kendrique and Kamden.