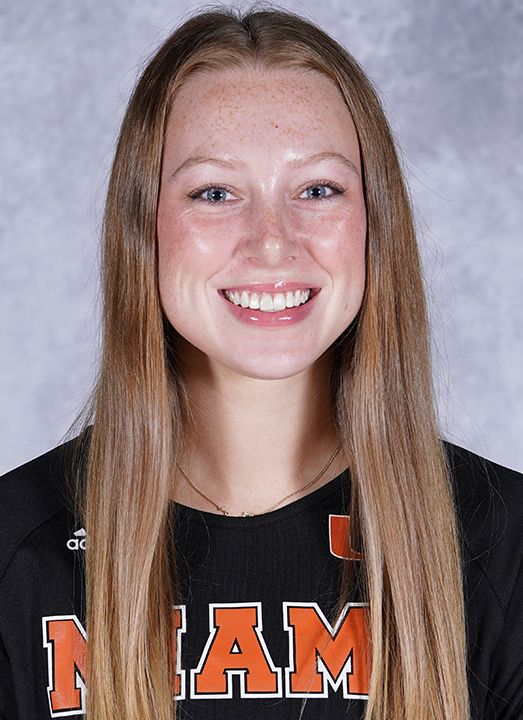 * Entered the 2020 season ranked sixth in Miami history with 1,028 assists and 13th in assists per season*

2019 (Freshman): Started in 15 of Miami’s 16 matches… Recorded the sixth most assists in Miami history with 1,028 and led the team with eight double-doubles in her opening campaign with Miami… Started her first match with the Canes at the Hurricane Invitational, tallying 52 assists and an ace against GW and added 41 assists and an ace against USF… At the Add-Ran Cup against TCU and Auburn, finished with 27 assists against the Horned Frogs and 41 assists and a career-high 13 digs for her first double-double of the season against the Tigers (Sept. 14)… Finished with 28 assists against FGCU, 45 against FAU and set a career high with 58 against UCF at the Sunshine State Challenge… In her first ACC match, she finished with 35 assists and one block at Wake Forest (Sept. 27)… Went to Duke and registered 48 assists, one ace and three blocks (Sept. 29)… Earned one kill, 34 assists, and two blocks against then-No. 4 Pittsburgh (Oct. 4)… Tallied 46 assists, two aces and two blocks against Virginia (Oct. 6)… Traveled to North Carolina and added 35 assists against UNC and 32 against NC State… Faced Syracuse and recorded 47 assists and one ace ( Oct. 18)… Against Boston College (Oct. 20) broke the 50 mark and registered 51 assists, set a career high with four aces and 12 digs, for her second double-double of the season… At Clemson added 29 assists and three blocks ( Oct. 25)… At Georgia Tech added 29 more assists and 11 digs for her third double-double… Competed in her first rivalry match against FSU and boasted 45 assists, two aces, 12 digs and a career-high four blocks, registering her first back-to-back double-double of the season (Oct. 30)… Faced the Hokies and took down Virginia Tech with 56 assists, 11 digs and three blocks (Nov. 3)… Tied a career-high with three kills at home against Louisville, while adding 45 assists, one ace and three blocks (Nov. 8)… Against Notre Dame, added 52 assists and 11 digs (Nov. 10)… In the second match against NC State, tied her career-high with 58 assists and 10 digs (Nov. 15)… In the final road match of the season, Vach registered 37 assists and a block (Nov. 24)… Faced FSU again and added 29 assists, three aces and 10 digs for her final double-double of the season (Nov. 27)… Ended the season with 28 assists, four digs and one block against Georgia Tech (Nov. 29).

In her senior season, Vach recorded a career-high 402 kills and a .406 hitting percentage and registered 29 assists and an eye-popping 363 aces, 51 blocks and a career-high 334 digs. Vach’s a 2x USAV All-American and a 2018 Under Armour First Team All-American. The setter has a career record of 109-14 and helped lead Oviedo to a Class 9A State Championship. The Winter Springs, Fla., native recorded 318 kills, a .387 hitting percentage, 314 aces and 32 assists. Vach was named a Prep Volleyball All-American, named to the Senior Ace List and was a 2017 National Junior of the Year Finalist. In 2016, the sophomore was named a 2016 Max Preps Underclass All American, recording 267 kills, 343 aces, 262 digs and 52 blocks. Vach earned the same recognition in 2017, helping her earn 2018 Max Preps Preseason All American honors.

Personal: The right-handed setter is the daughter of Kimberly Vach who played volleyball at Stetson… Has one older sister, Sydney who played a season of volleyball at Harvard, and a young brother, Slater.