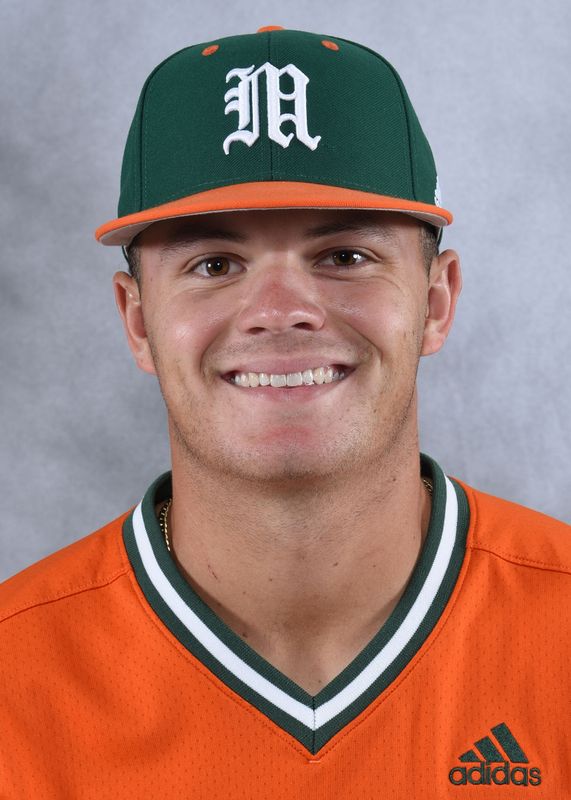 Junior (2020): Appeared in all 16 games and made seven starts at second base in shortened 2020 college baseball season…Was Miami’s Opening Day second baseman…Had three hits, two RBI and one run scored in 28 at-bats…Singled in Opening Day win over Rutgers (Feb. 14)…Drove in a run in sweep-clinching victory over Rutgers (Feb. 16)…Had a hit and a run scored in win over Kent State (Feb. 19)…Singled against No. 2 Florida (Feb. 22)…Drove in a run in sweep-clinching win over Towson (Mar. 1)

Sophomore (2019): Appeared in 10 games as a reserve infielder…Had a double, an RBI and three runs scored n nine at-bats…Walked and scored a run in Opening Day victory over Rutgers (Feb. 15)…Scored a run in win over UMBC (Mar. 3)…Recorded an RBI double in win over Jackson State (Mar. 13)…Missed final two months of the season due to injury.

True Freshman (2018): Saw action in 17 games with four starts in first season…Totaled two hits, 10 walks, four runs and four RBI…Reached base at .588 clip in limited action during ACC play…Drew walk in first plate appearance of career vs. Maine (March 4)…Made first start of career and collected first hit with two walks against North Carolina (April 8)…Collected first RBI of career vs. FGCU (April 18)…Had two runs and one RBI at Florida State (April 29)…Had two RBI and one hit (1-for-3) on the road at Virginia Tech (May 13).