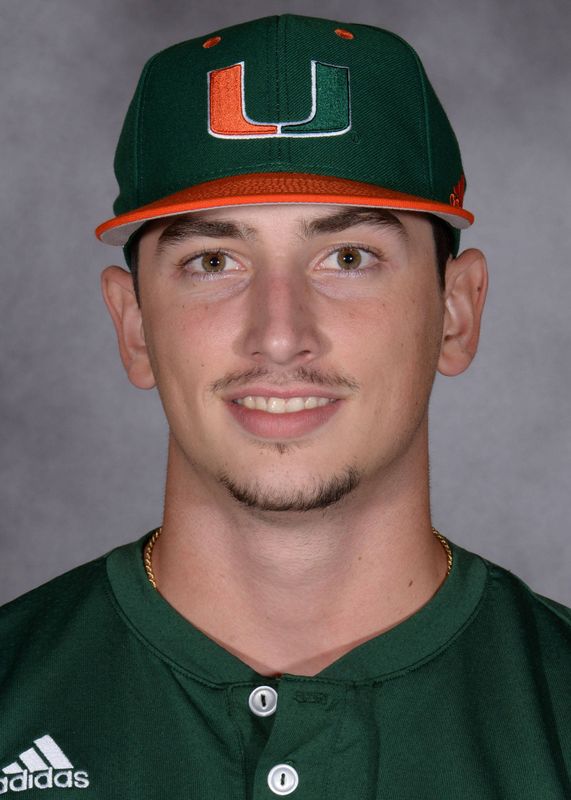 Redshirt Freshman (2018): Saw action in 24 games with 21 starts in second season…Batted .225 with five doubles and 14 RBI…Had four multi-hit games and three-multi-RBI games…Started first eight games of season at catcher before suffering bone bruise at FAU (Feb. 28) that forced him to miss one month of action…Opened season on career-long six-game hitting streak, including multi-hit performances in final two games vs. Rutgers (Feb. 17-18)…Had one hit and one RBI in series opener vs. Florida (Feb. 23)…Returned in start at catcher at Georgia Tech (March 31) and went 1-for-3 with one run scored…Started both games of doubleheader at Clemson (April 14), finishing 1-for-4 in Game 1 and 2-for-4 in Game 2…Had three RBI in start vs. FIU (April 25)….Connected for three hits, three RBI and two doubles in win at Virginia Tech (May 12)…Finished series against Hokies with six RBI and four hits.

True Freshman (2017): Started five of team’s first seven games at catcher before suffering broken bone in leg on March 1, causing him to miss remainder of season…Was slated as team’s starting catcher…Had team-leading .357 average at time of injury…Made first start of career behind plate in season opener against Rutgers (Feb. 17)…Started series finale vs. Scarlet Knights (Feb. 19) and recorded first three hits, including one double, and three RBI of career…Started and went 1-for-3 in finale at Florida (Feb. 26)…Was 1-for-1 with one walk at FAU (March 1) before suffering injury.

Personal: Mother is Amy Amditis…Intends to major in sports administration.