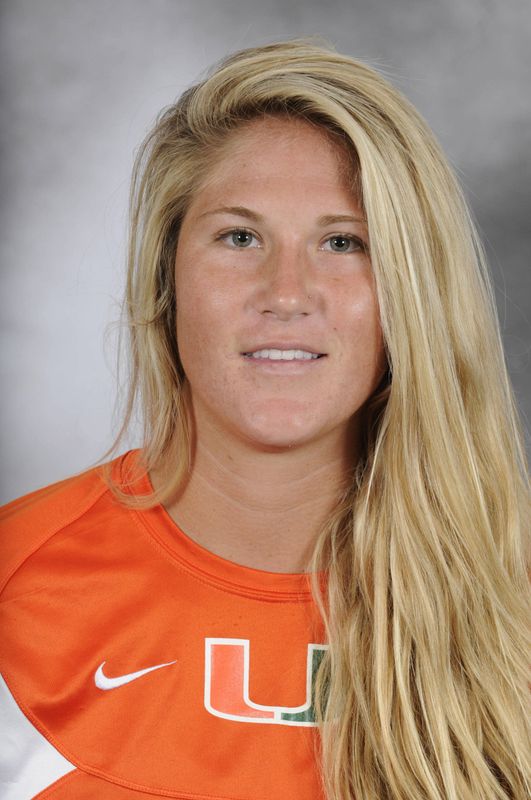 2012 (SENIOR): Started17 of 18 games in which she competed, serving as anchor in center of defense … Playedkey role for team that ranked fifth in ACC in goals against average (0.90) … Ledteam with 8 points on 3 goals and 2 assists … Used size effectively as force onfree kicks and corner kicks … Registered first point of season on assist in season-openingwin at Florida (Aug. 17) … Scored 2 goals in 4-0 win over Morehead State (Aug.24), both on headers … Tallied third goal on direct free kick in loss at NorthCarolina (Sept. 30).

2011 (JUNIOR): Started all 19 games of the season, serving as the Hurricanes’ backline anchor…Scored one goal and recorded one assist on the year…Recorded her first career goal during a 4-1 loss to Wake Forest (9/25).

HIGH SCHOOL: A four-time letter winner in both soccer and basketball and a two-time letter winner in lacrosse at McDonogh High School… Member of the 2007 and 2008 state finalist team… Her team was ranked as high as No. 1 in the nation during the 2008 season… Named to the NSCAA/Adidas All-South Team, the ESPN Rise All-America Third-Team, first team all-state and the Baltimore Sun All-Metro teams in 2008… Posted 20 shutouts her senior season.

PERSONAL: Chose Miami because of the location, coaches and to help build the program… Chose UM over Maryland, South Carolina, Navy and Florida… Plans to major in Marine Biology.