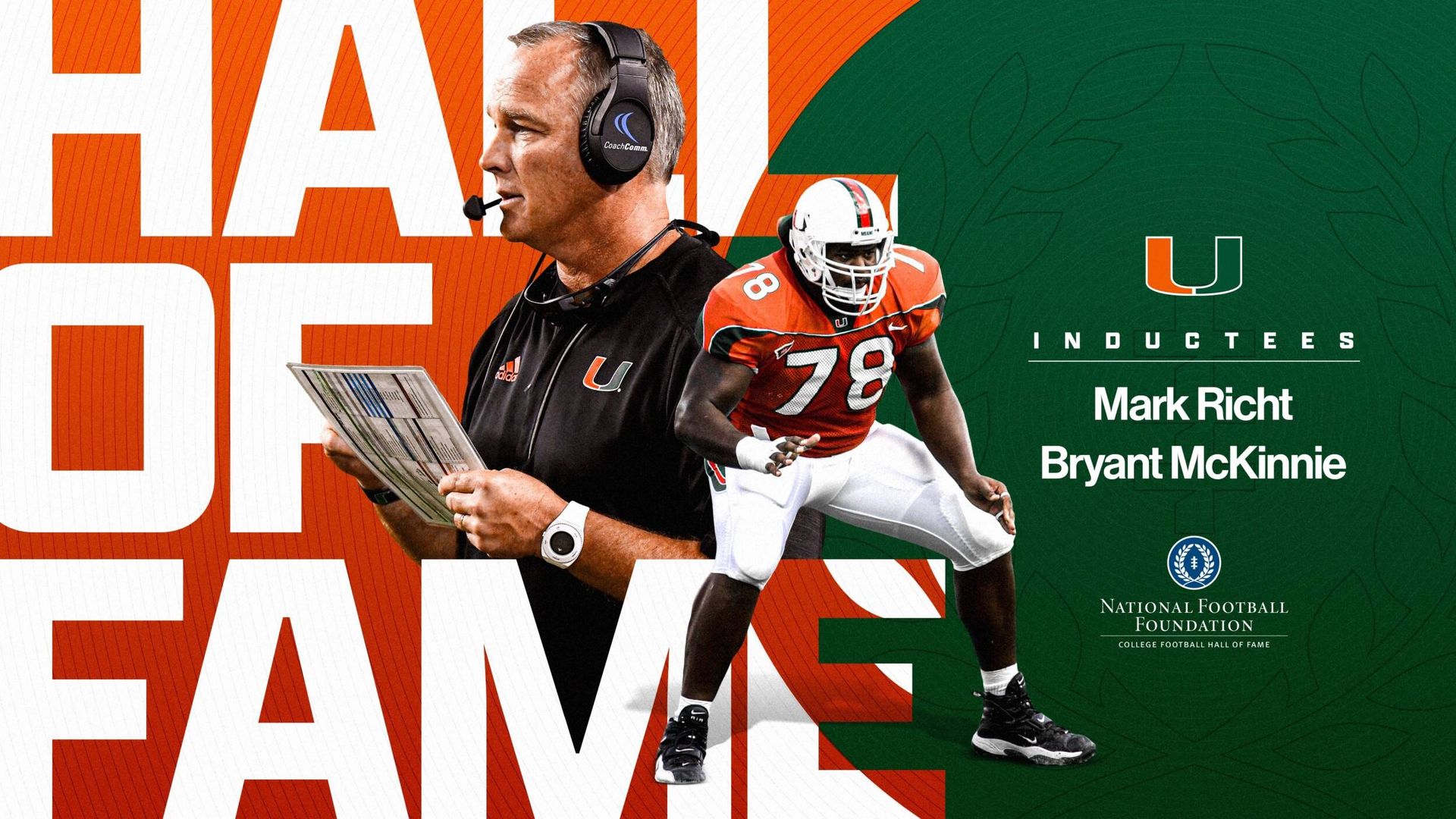 CORAL GABLES, Fla. – University of Miami legends Bryant McKinnie and Mark Richt were announced as members of the 2023 College Football Hall of Fame Class by the National Football Foundation Monday.

McKinnie overpowered and dominated his opponents, never allowing a single sack during his entire college career and helping the 2001 Miami Hurricanes claim the national title. A unanimous First Team All-American in 2001, McKinnie claimed the 2001 Outland Trophy as the best interior lineman in the nation, and he was named the National Player of the Year by CNNSI.com while finishing eighth in 2001 Heisman Trophy voting.

The Canes went to 23-1 during McKinnie’s time in Coral Gables, and the team notched back-to-back postseason wins, beating Florida, 37-20, in the 2001 Sugar Bowl and claiming the national title with a 37-14 victory over Nebraska in the 2002 BCS National Championship Game at the Rose Bowl. Miami finished no lower than No. 2 nationally in his two seasons with the Canes, and McKinnie played a key role on an offensive unit that ranked No. 2 in 2000 and No. 3 in 2001 nationally in total offense. In 2001, McKinnie anchored an offensive line that averaged 5.3 yards per rushing attempt and 43.2 points per game on the way to an undefeated season and the national title. 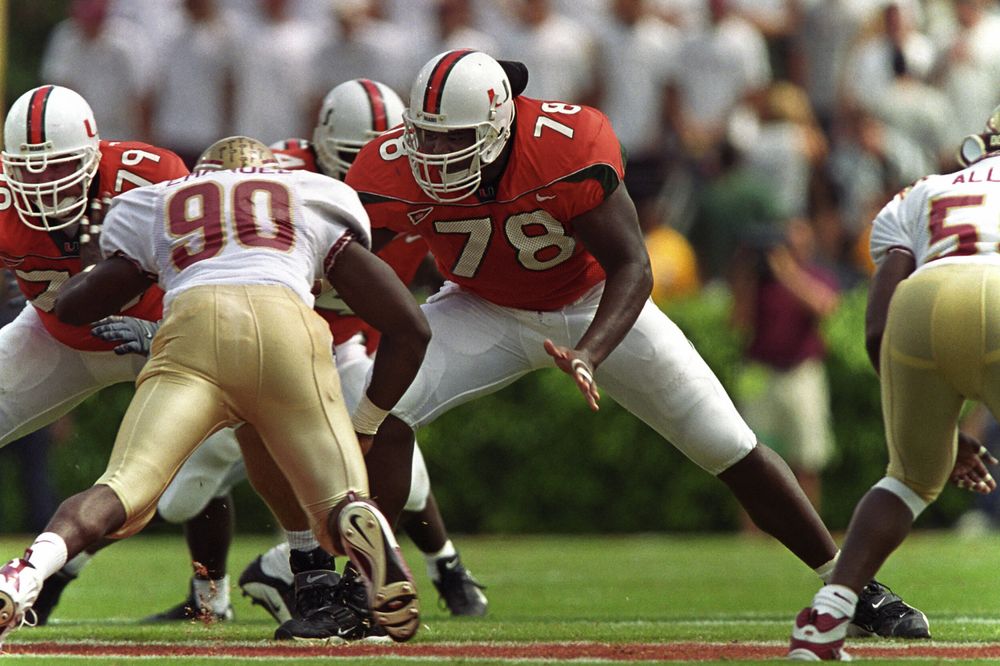 McKinnie blocked for back-to-back 1,000-yard rushers and protected his Maxwell Award-winning QB Ken Dorsey, who threw for 2,737 yards in 2000 and 2,652 yards in 2001. His hallmark performance came when he dominated in Miami’s 59-0 victory against Syracuse in 2001, never allowing a QB sack during 52 plays. In 2000, he had another signature game versus archrival Florida State, shutting down FSU’s highly acclaimed defense in the Canes’ 27-24 victory.

A two-time First Team All-Big East selection, McKinnie led the Canes to two Big East titles (2000, 2001) and a perfect 14-0 conference record during his career. He was named 2001 Big East Player of the Year by The Football News, and he helped the Canes lead the conference in passing yards and total offense both years. Selected seventh overall by Minnesota in the 2002 NFL Draft, McKinnie played for the Vikings (2002-10), Ravens (2011-13) and Dolphins (2013). He was a 2009 Pro Bowl selection, and he helped Baltimore win Super Bowl XLVII. 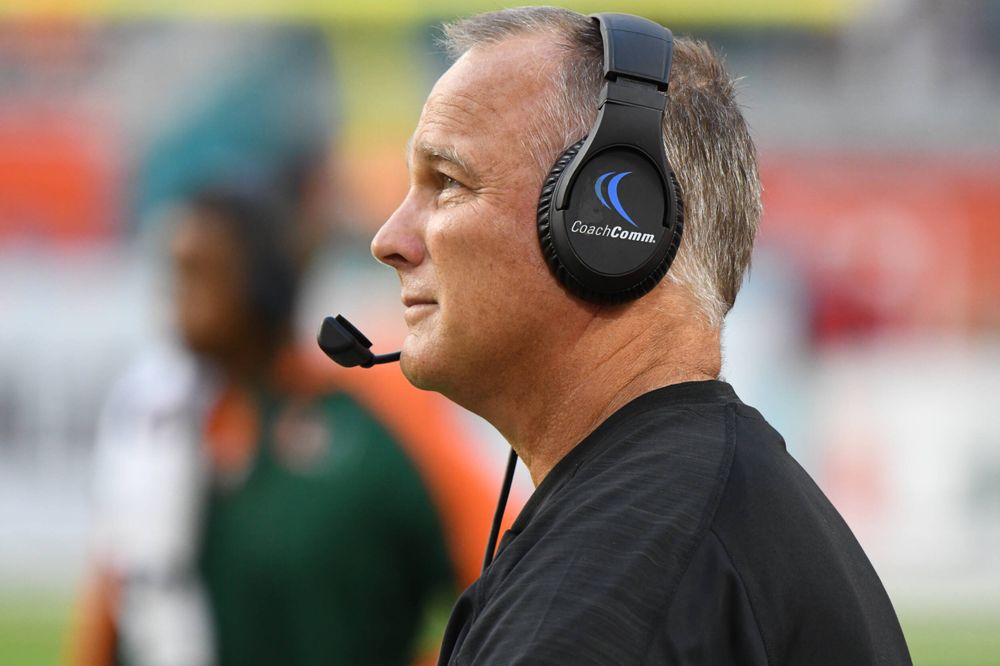 During his 18 years as a head coach, Richt established himself as one of the top coaches in the history of college football, winning nearly 72 percent of his games at Georgia and Miami and never failing to make the postseason. The Omaha, Nebraska, native, and Boca Raton High School product, became the fifth Hurricanes coach to enter the College Football Hall of Fame.

Richt is one of only five coaches in FBS history to record 145 or more wins in their first 15 seasons, including Hall of Famers Bob Stoops, Barry Switzer and Tom Osborne. At the time of his retirement, he ranked No. 48 in the NCAA record books on the FBS all-time win list, behind only five coaches who had coached within five years of his retirement.

Returning to his alma mater (where he played quarterback from 1979-82) after a stellar coaching career at Georgia, Richt led Miami to a 26-13 record for the final three seasons of his head coaching career, securing three more bowl appearances, including one more New Year’s Six Bowl, the Orange in 2017. Two of his three Miami teams posted top 20 finishes, the 2016 team at No. 20 and the 2017 team at No. 13. He led Miami to the 2017 ACC Coastal Division title, the school’s first division title since joining the ACC, and he was named both the ACC Coach of the Year and the Walter Camp Coach of the Year in 2017.

Prolific in the community, Richt is active with H.E.R.O. for children, Eagle Ranch orphanage facility and led two mission trips to Honduras. He has been a celebrity spokesperson for the National Guard Youth Foundation and a key supporter of The Healing Place of Athens for men with addictions. While at UGA, he founded the Paul Oliver Network, a program that supports lettermen in their transition to life after football. In 2016, Richt was named the first-ever honorary head coach of the Allstate AFCA Good Works Team for his commitment to giving back to others. In 2013, Richt received the Stallings Award given for commitment to humanitarian and community service efforts, and in 2010, he was named to the AFCA Board of Trustees. Since retiring as a coach, Richt has worked as an analyst on the ACC Network.

The 2023 College Football Hall of Fame Class will officially be inducted during the 65th NFF Annual Awards Dinner Presented by Las Vegas on Dec. 5, 2023, at the ARIA Resort & Casino Las Vegas.

The inductees will also be recognized at their respective collegiate institutions with NFF Hall of Fame On-Campus Salutes, presented by Fidelity Investments, during the fall. Their accomplishments will be forever immortalized at the Chick-fil-A College Football Hall of Fame in Atlanta, and each inductee will receive a custom ring created by Jostens, the official and exclusive supplier of NFF rings.

“We want to thank ESPN for the opportunity to announce the 2023 College Football Hall of Fame Class during today’s lead up to the College Football Playoff National Championship,” said NFF President & CEO Steve Hatchell. “Today’s announcement shines a light on the accomplishments of some of college football’s greatest legends.”