Walters earned first-team distinction, as the lone reliever on the top group. Meanwhile, Morales was named one of two second-team selections at the hot corner. Miami is one of three ACC teams with multiple Collegiate Baseball preseason All-Americans.

A consensus All-American in 2022, Walters emerged as one of the top closers in the country, totaling a 1.65 ERA in 24 appearances. The 6-foot-4, 220-pound hurler posted an ACC-best 14 saves, which finished tied for fifth nationally and 10th all-time in a single campaign at Miami.

The NCBWA Stopper of the Year Award finalist recorded a 10.33 strikeout-to-walk-ratio, punching out 62 hitters and issuing only six walks.

Among pitchers who threw at least 25 innings at the Division I level last year, Walters leads all returning Power 5 arms in WHIP (0.58) and opponent batting average (.116), while ranking third in ERA. 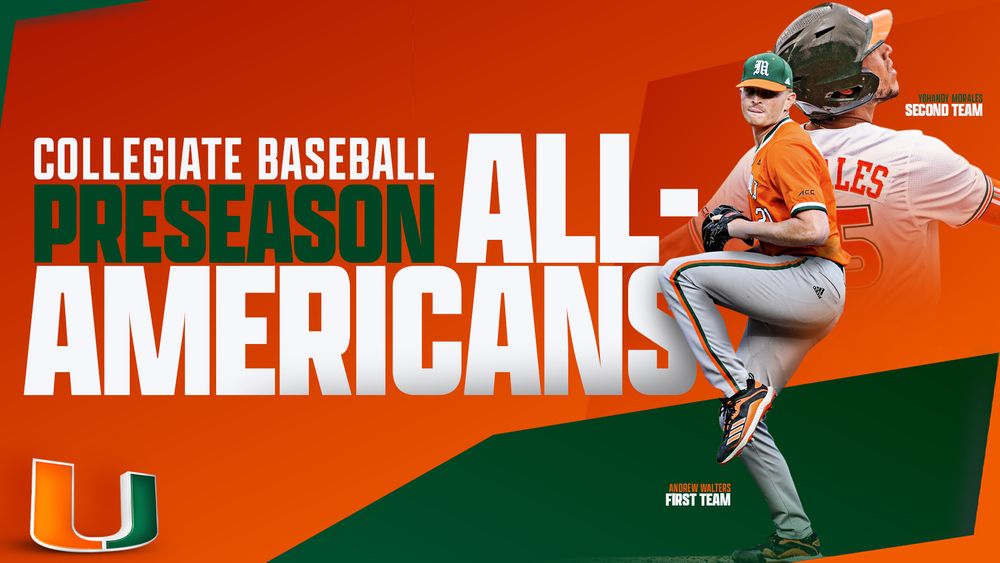 One of the most highly-touted draft prospects for 2023, Morales received NCAA Division I Southeast All-Region Second Team recognition and All-ACC Second Team honors as a sophomore.

Following his star-studded season, Morales was chosen to represent his country this past summer as a member of USA Baseball’s Collegiate National Team. The Miami native helped the USA capture a bronze medal during Honkbalweek Haarlem, finishing with team highs in batting average (.400), hits (8) and RBI (4).

Miami opens its 2023 campaign versus Penn State on Feb. 17. First pitch is scheduled for 7 p.m. at Alex Rodriguez Park at Mark Light Field.