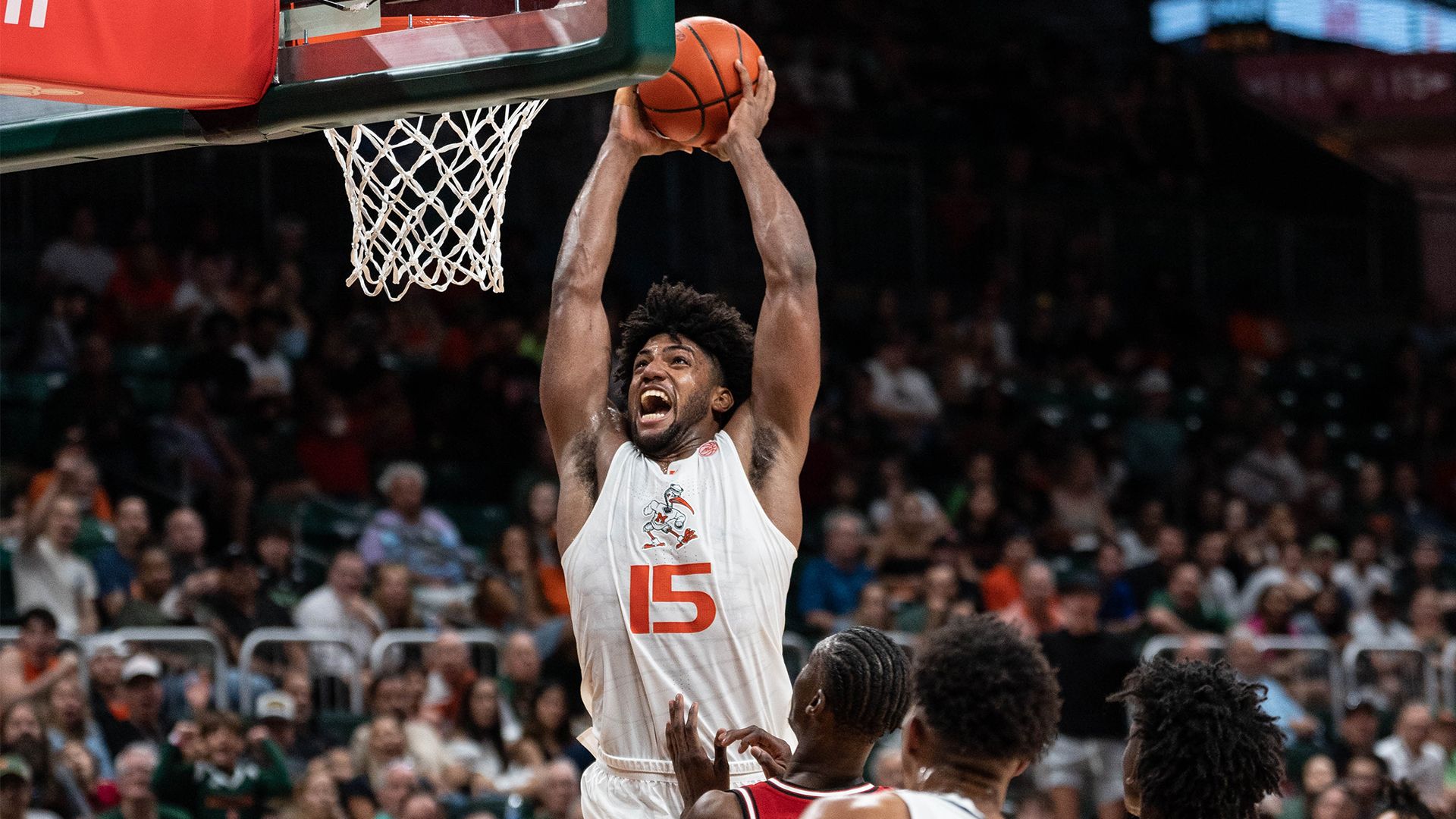 CORAL GABLES, Fla. – The University of Miami men’s basketball team rallied back from a 16-point deficit to knock off NC State, 80-73, in its ACC home opener Saturday afternoon at the Watsco Center.

Miami (10-1, 2-0 ACC) trailed by 12 with under 14 minutes left, but came all the way back for its second double-digit rally of the year, this one behind a team-high 25 points from fifth-year senior guard Jordan Miller.

Miami closed within seven late in the half, but NC State scored the final basket of the frame. That gave the visitors a nine-point edge, 43-34, at the intermission behind a combined 36 points on 16-of-25 shooting from sophomore guard Terquavion Smith (16), graduate student forward DJ Burns (10) and graduate student guard Jarkel Joiner (10).

The Hurricanes opened the second half with back-to-back 3-pointers by third-year sophomore guard Nijel Pack and fourth-year junior guard Isaiah Wong in the first 40 seconds, making it an extended 19-8 run and slicing the deficit to three, 43-40. After the Wolfpack reextended the advantage to 12, Miami went on a 10-0 surge in just 2:14 to make it 55-53 with 11:27 to go.

Miami went on to tie the score at 67 on a fast-break dunk by fourth-year junior guard Harlond Beverly with 5:22 remaining. It pulled ahead for good on a 3-pointer by Miller with 3:40 on the clock and Wong made it 72-67 just 51 seconds later, capping a 10-0 burst.

NC State never got any closer than two, while the Hurricanes pushed the lead as high as eight on their way to a joyous celebration following the seven-point victory.

The Hurricanes, who held the Wolfpack to 37.9 percent (11-of-29) shooting in the second half, finished with just six turnovers–including only two in the final 32 minutes–against an NC State team that entered the day leading the ACC in steals per game (9.9) and turnover margin (+3.80). They also had a 21-9 edge in fast-break points and a 9-2 mark in bench points.

Miller’s 25 points, which tied his career high as a Hurricane, came on an 8-of-15 clip from the field, a 2-of-5 mark on 3-pointers and a 7-of-8 tally at the line. The Middleburg, Va., native added five rebounds, three assists, one steal and zero turnovers.

Wong scored 16 second-half points and finished with 22 on 8-of-13 shooting, as well as led all players with a career-high eight assists. Third-year sophomore forward Norchad Omier recorded his sixth double-double of the season with 11 points and a game-best 11 boards.

Joiner led all players with 26 points on 10-of-16 shooting, but Miami forced him into misses on his last three attempts down the stretch. Smith registered 19 points, with just three in the second half, and a team-high seven assists. Burns added 16 points and a team-best eight rebounds in the loss.

Following six days without a game, the Hurricanes resume play Dec. 17 at noon when they host St. Francis (PA) at the Watsco Center, live on RSN.

MIAMI HURRICANES POSTGAME NOTES
– Burns, Joiner and Smith all reached double digits in the scoring column within the first 15:03 of the game.
– The Wolfpack committed its first turnover of the game with 7:04 on the first-half clock and then committed another just 30 seconds later.
– NC State posted all eight of its turnovers in the final 27:04, while Miami had just two giveaways in the last 32:20, including only one in the final 18:33.
– During a stretch late in the first half, Miami made six consecutive field goals and NC State hit five in a row at the other end, while both teams had concurrent stretches with four straight makes midway through the second half.
– Miami matched a season high with 22 assists and improved to 20-1 under head coach Jim Larrañaga when tallying 20-plus assists.
– After logging 21 assists Wednesday against Cornell, this now is the first time in Larrañaga’s 12-year tenure Miami has recorded 20-plus in back-to-back games.
– The Hurricanes moved to 13-6 all-time in ACC home openers, including 7-5 under Larrañaga.
– Miami has now won at least 10 of its first 11 games for the ninth time in program history, including the third time under Larrañaga and first since 2017-18.
– The Hurricanes improved to 7-6 in their last 13 games when trailing by double digits, dating back to 11/16/21 versus North Texas in Kissimmee, Fla.
– Miami has posted 80-plus points in four of its last six ACC games, including each of its first two in 2022-23.
– Larrañaga passed Vic Bubas for sole possession of the No. 11 spot on the all-time ACC league wins list with 107.
– Wong’s prior career high in assists was seven, logged on 11/15/22 versus Florida A&M.
– Miller has two prior 25-point games as a Hurricane, most recently at Syracuse on 3/5/22, while the other was also at home versus NC State back on 12/29/21.
– Miller also set Miami and ACC highs in minutes (38), made free throws (seven) and free-throw attempts (eight).
– Beverly finished plus-16, the second-highest mark of anyone on either team, in just 16 minutes of action. 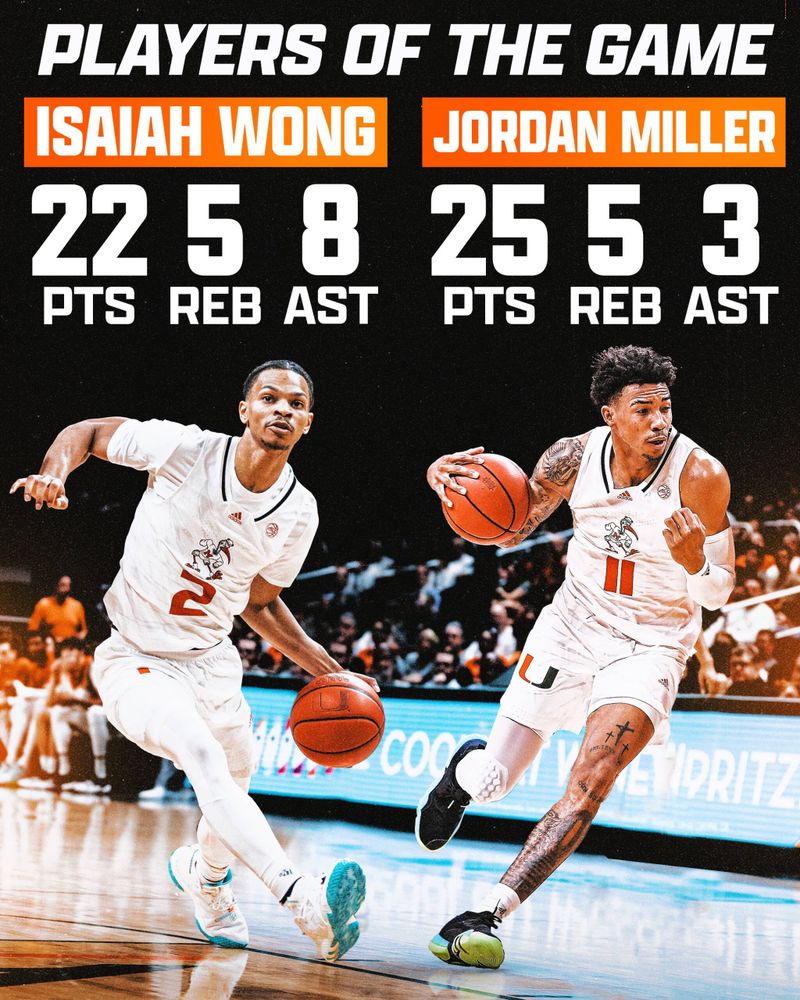