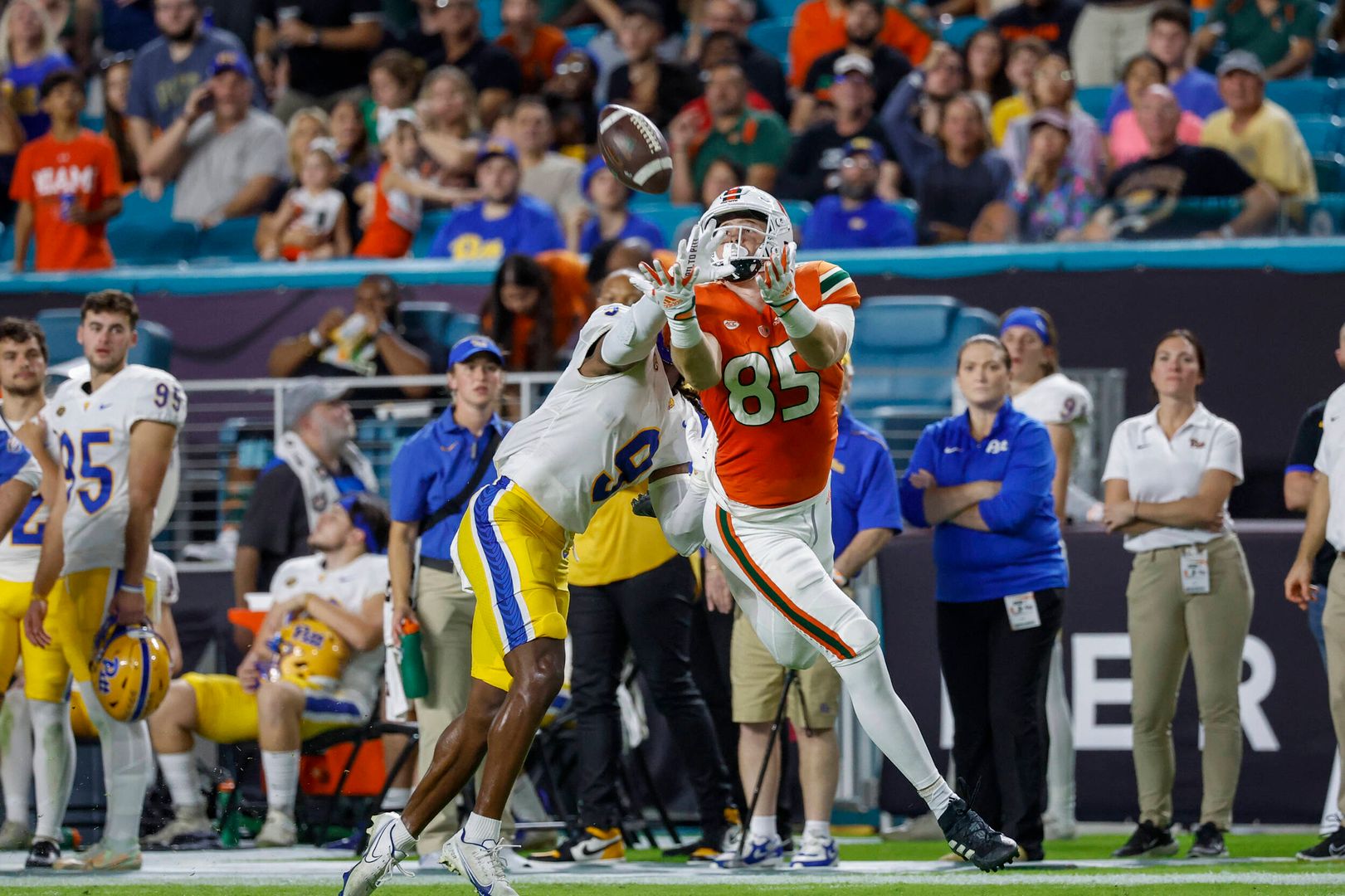 MIAMI GARDENS, Fla. – The Miami Hurricanes entered Hard Rock Stadium Saturday night with an opportunity to reach six wins and send their seniors out on a positive note.

But the Pittsburgh Panthers took control of the game from the outset and pulled away for a 42-16 win before a crowd of 46,428.

Pittsburgh improved to 8-4 overall, 5-3 in the ACC. Miami fell to 5-7 and 3-5 in conference play. The Panthers broke a four-game losing streak to the Canes and earned their first victory at Hard Rock Stadium since 2014.

Pittsburgh amassed 504 yards, including 248 on the ground and averaged eight yards per play. Its defense racked up six sacks and 11 tackles for loss. The Panthers put the ball on the ground seven times but only lost one of them. Meanwhile, the Canes turned the ball over on three of their first five possessions, leading to 14 Panthers points.

“It was a disappointing night for us,” head coach Mario Cristobal said. “We really wanted to win for our program and for our seniors. I always have to take full responsibility as a head coach and as an organization. We started off slow and obviously it didn’t go well. I appreciate the effort from the second-half guys trying to make something happen, but not nearly enough.

Jake Garcia, one of three quarterbacks deployed by the Canes during the game, completed 17 of 28 passes for 192 yards with two touchdowns. Tight end Will Mallory caught nine passes for 103 yards and one touchdown, vaulting up to second place on Miami’s all-time list for career touchdown receptions (14) and receiving yards (1,544) for tight ends. Running back Jaylan Knighton rushed for 72 yards on seven carries. Safety James Williams led Miami with 10 tackles and recovered a fumble. Defensive tackle Leonard Taylor had two tackles and an interception, the first takeaway of his career.

Panthers quarterback Kedon Slovis completed 18 of 28 passes for 256 yards with three touchdowns and one pick. All three scoring strikes were to wide receiver Jared Wayne, who had 11 catches for 199 yards. Running back Israel Abanikanda rushed for 111 yards and two touchdowns, his ninth 100-yard rushing game of the season. Defensive lineman Dayon Hayes registered five tackles, including four TFLs and three sacks.

After missing the previous two games due to injury, Tyler Van Dyke opened the game at quarterback for the Canes and hit Mallory for two big gains on Miami’s opening drive – a 25-yarder and a 39-yarder, which gave the Canes a first down at the Panthers 11. But two plays later Van Dyke was picked off by linebacker Sirvocea Dennis, who rumbled 67 yards to the Miami 30. Van Dyke did not return to the game.

The Panthers needed just four plays to punch it into the end zone as Abanikanda rushed in from two yards and Pittsburgh had an early 7-0 lead.

Brown lined up at quarterback for Miami’s second series but his pass on 3rd and 8 from the Canes 27 was intercepted by safety Javon McIntyre. The Panthers took over at their own 39 and marched all the way to the Miami five-yard line.

But the Canes’ defense stiffened. Abanikanda was stopped on 3rd and goal from the one-yard line and again on 4th and goal by defensive ends Mitchell Agude and Akheem Mesidor. Miami got the ball back and Garcia entered the game at quarterback.

Running back Henry Parrish, Jr. broke free for a 22-yard run to give the Canes some breathing room. The drive stalled and Lou Hedley trotted out to deliver another cannon shot with his right boot. Pittsburgh running back Vincent Davis fumbled the punt, but cornerback M.J. Devonshire alertly pounced on the loose ball. Two plays later Slovis connected across the middle with Wayne, who dodged tacklers and raced down the right sideline for a 66-yard touchdown run that made it 14-0 in favor of the Panthers.

After the teams traded punts, Garcia found Mallory for a nine-yard gain but Pittsburgh free safety Erick Hallett II popped the ball loose and recovered it at the Miami 19. Abanikanda covered the rest of the real estate on two runs and his 11-yard scoring scamper pushed the Panthers’ lead to three touchdowns.

On Pittsburgh’s next drive Taylor corralled his first career interception, giving the Canes the ball back at the Panthers 35. The Canes moved the ball to the 18-yard line and Andy Borregales came on to seemingly attempt a 35-yard field goal; instead, he took a pitch from Hedley and headed for the sticks but came up just short. Abanikanda followed with a 37-yard burst into Miami territory and Slovis eventually hit Wayne for another score, this one a 26-yarder that made it 28-0 Panthers at halftime.

Knighton broke loose for a 56-yard gain on Miami’s first possession of the second half, giving the Canes a first and goal at the Panthers 4. Pittsburgh’s defense held but the Canes got on the scoreboard with a 25-yard field goal by Borregales. The Panthers responded with Slovis’ third touchdown toss to Wayne, a seven-yarder that capped a 10-play, 79-yard drive. The lead was up to 35-3.

The Canes crossed midfield and went for it on 4th and 4 from the Pittsburgh 43, drawing a pass interference penalty to keep the drive alive. Another pass interference call set up the Canes with first and goal at the Panthers 4. On the next snap, Garcia found Mallory in the end zone to trim Pittsburgh’s lead to 35-9 early in the fourth quarter. It was Mallory’s 14th career touchdown reception, which tied Clive Walford for the school record for touchdown catches by a tight end.

The Panthers added another touchdown on a 26-yard run by running back C’Bo Flemister. Then Garcia found wide receiver Romello Brinson for his longest completion of the night, a 58-yarder that moved the ball to the Pittsburgh 18. Three plays later Garcia hit wide receiver Xavier Restrepo on a four-yard scoring strike. Pittsburgh’s lead was 42-16.

Williams recovered a fumble to stymie the Panthers’ next drive and Miami drove all the way to the Pittsburgh five-yard line. But Hayes sacked Garcia on fourth and goal to end the drive.