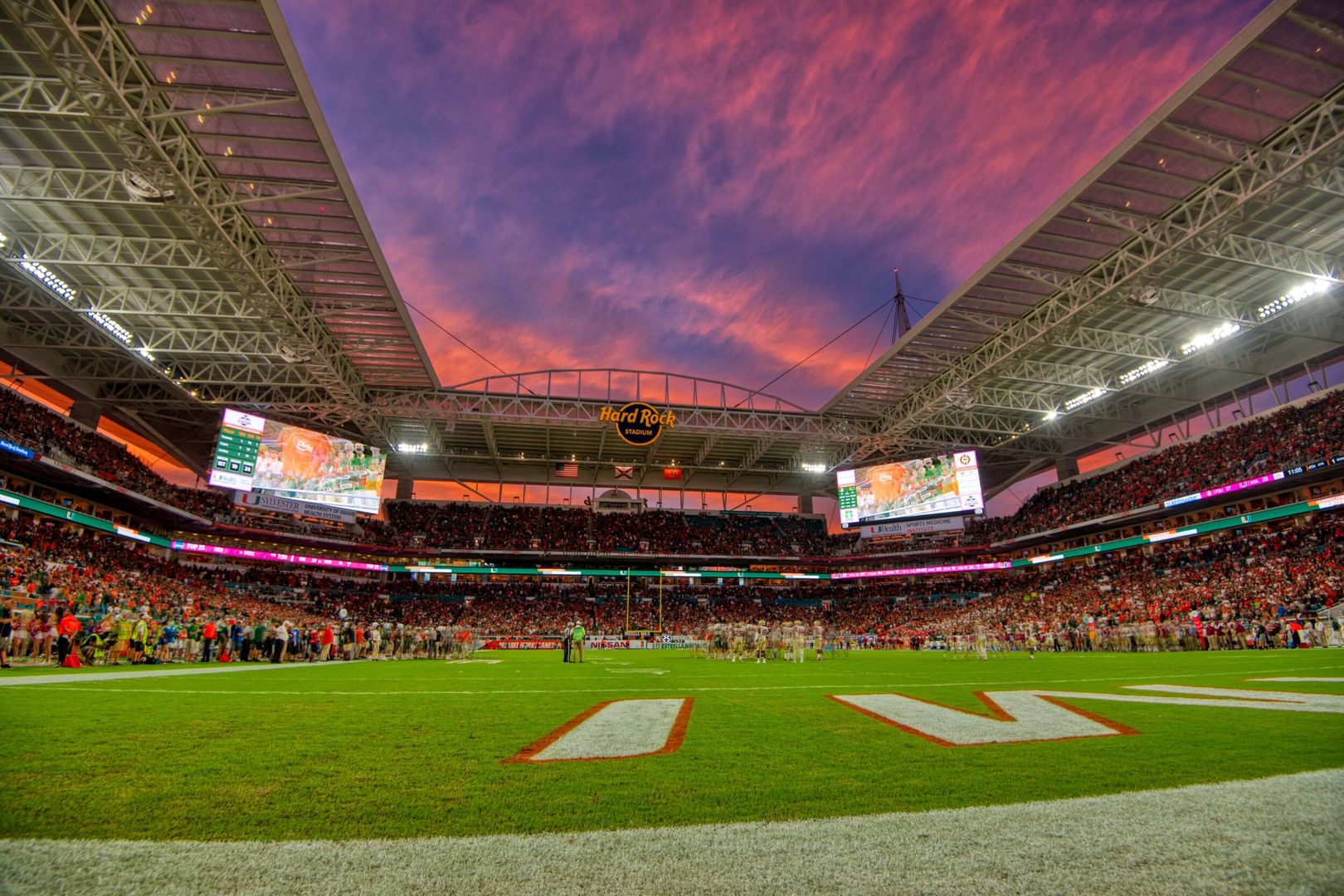 "You Come Here for This Kind of Rivalry"

CORAL GABLES, Fla. – Even growing up in California, Mitchell Agude knew about the rivalry.

He’d watched film of Michael Irvin making plays against Florida State. Had seen Deion Sanders do the same against Miami. And every time his cousin came over to visit, he and his older brother would always engage in epic video game battles pitting the Hurricanes and Seminoles.

Agude may have been 3,000 miles away from the epicenter of the Miami-Florida State rivalry, but he understood its impact on college football and could rattle off the names of some of the legends who’d played in the game when it often helped decide national championships.

On Saturday night, the outside linebacker will have his first real taste of the game when he and his Miami teammates take the field at Hard Rock Stadium to face the visiting Seminoles (5-3, 3-3 ACC).

That, he notes, is what help make games like this one so special.

“One thing I know about rivalry games is just having bragging rights and I think just knowing the team across the street, if they know that they lost, that’s a whole year they have to train and remember, ‘Okay, we have to come back,’” Agude said. “And if you won that game, you know it’s like ‘Alright, y’all have to come get this from us, get it back. But you know it’s not going to come easy.’”

He continued, “It’s [going to be] just relentless, relentless effort. Smash-mouth football and just looking at another man in his face and knowing ‘I got you. This is going to be a dogfight all game.’ You know they’ll be ready.” 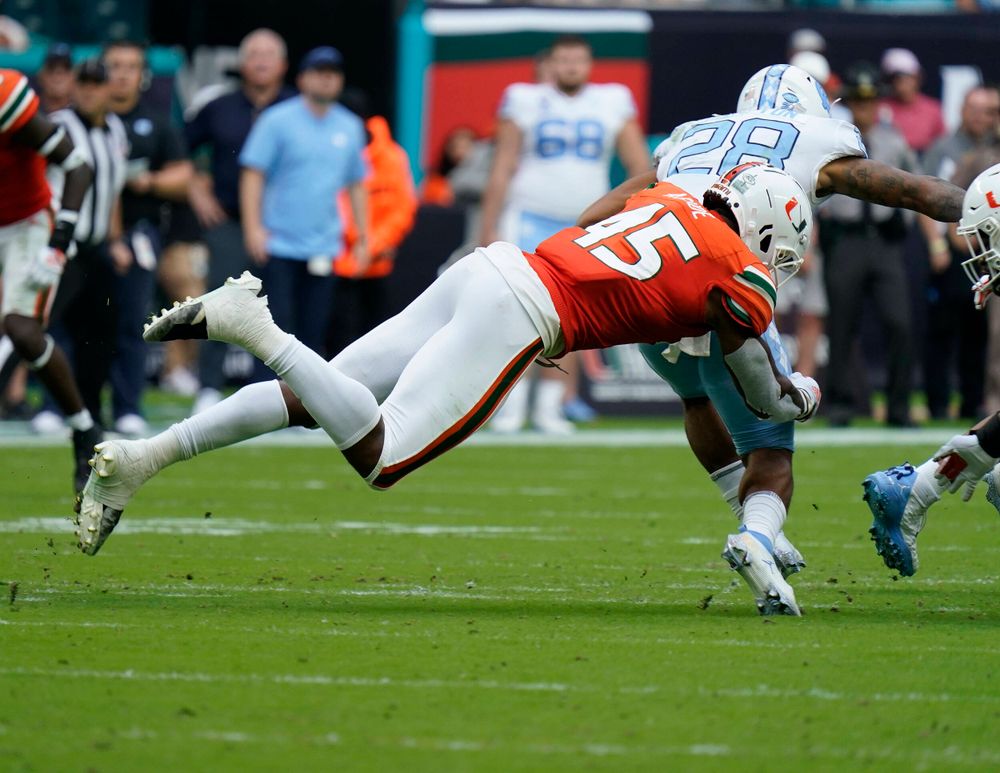 Hurricanes outside linebacker Mitchell Agude hails from California, but even from 3,000 miles away, he had an appreciation for the Miami-Florida State rivalry. This week, he'll make his first appearance in the game.

A Chance To Win Big While Supporting Student-Athletes!

50% of all proceeds will contribute to scholarships and operational funding for student-athletes through the Student Impact Fund. The winner will be announced during the 4th quarter of the Miami vs FSU football game on November 5th.
Get your tickets now!

Agude is one of several Hurricanes (4-4, 2-2) who will make their debut in the Miami-Florida State rivalry this weekend.

Some of the newcomers – like Agude, running back Henry Parrish Jr., and receiver Colbie Young – are players who started their college careers elsewhere. Others – like Alex Mirabal and Frank Ponce – are assistant coaches who have deep Miami ties and know the game’s impact.

All say that amidst the preparation this week, they’ve let themselves savor, ever so briefly, what it means to be able to add their names to the legacy of one of college football’s most storied rivalries.

“I mean, as a fan growing up, obviously I knew about it and I’ve sat in the stands for it when I was in high school and college, but never as a football coach,” said Mirabal, Miami’s assistant head coach and offensive line coach. “I don’t think it’ll hit me in the face until I run out onto the field, you know? So I’m looking forward to it. Sometimes as coaches, we get so regimented and caught up in preparing for the opponent and they become almost nameless and faceless. But just now, I was doing some tip sheets for the offensive line and I’m like ‘Oh, heck. We’re playing FSU.’ But I get a sense of it, too, when I talk to my players because they say ‘Yeah, you know what? I played against No. 90 in high school or No. 9, I had to block him at a camp when we were on the camp circuit.’ So, there’s closeness. They know each other. So I’m excited for it. I’m excited to be a part of it and I’m excited to, hopefully, have great success against FSU in the coming years.”

Added Ponce, Miami’s quarterbacks coach and passing game coordinator, “All those years growing up in Miami, it was the one game you always waited for every year. That one, and the series with Florida back in the day. But that was never as intense and exciting as the Florida State game…It was one you were always watching. I’d never miss it. And it was always awesome. You just saw the legends that played here against Florida State, and their legends as well. So, you knew it was going to be exciting. It’s always exciting. I’ve played against Florida State before, but not with the ‘U’ on my polo. I’m excited. Everyone here is excited because that tradition lives. Now, I’m part of it and I’m excited and looking forward to it.” 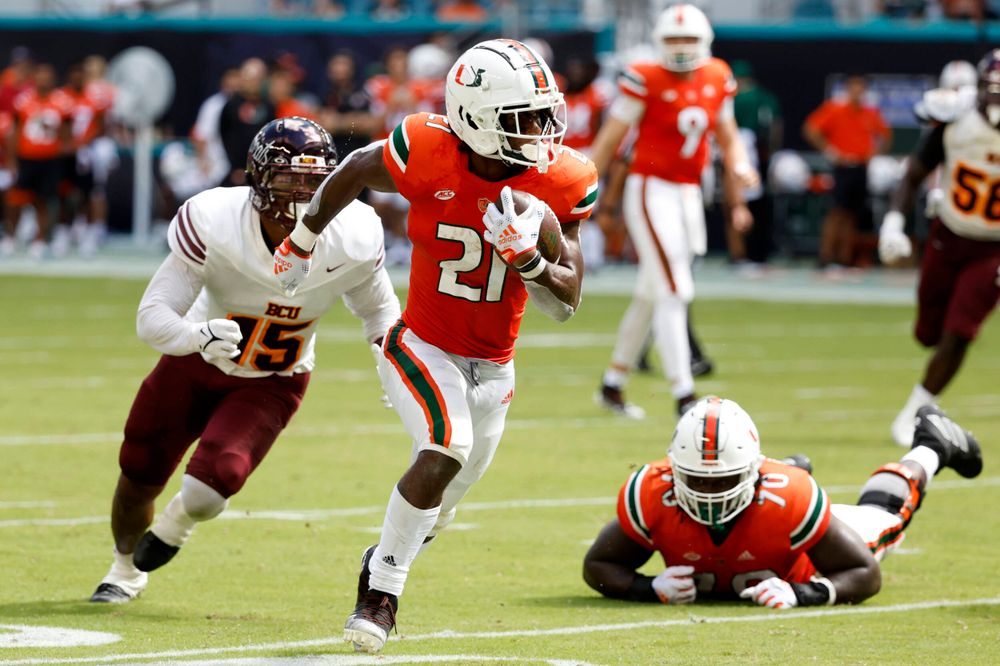 While Parrish Jr. started his career at Ole Miss, like Ponce and Mirabal, he has deep ties to Miami.

The former Christopher Columbus standout from Goulds knows full well what the rivalry means not to just the South Florida community, but to the state as a whole.

And like many across Florida, he finds himself in a family good-naturedly divided this weekend.

His father – Henry Parrish Sr. – is a longtime Florida State fan and father and son have exchanged more than a few teasing messages in the days leading up to the game.

“Me and my dad, we joke around, but it’s all fun and games until it comes down to the trenches, where you’ve got to put the work in,” Parrish Jr. said. “You’ve got to take it day by day and be ready…But yeah, we’ve teased each other all week, since Sunday. It’s a wonderful moment and it’ll be nice having those memories and little flashbacks with Dad.”

For Young, who hails from New York and played last year at Lackawanna College, Saturday’s game will be his first opportunity to participate in any kind of major college football rivalry game.

That has the receiver plenty excited.

“It’s for bragging rights,” Young said. “You know you want to win so bad…[The energy] is going to be something new for me. I know it’s one thing I never really got to experience up north. It’s more like a basketball state. I’m going to go with the flow and lock into the game and not let that get to me, but it’s exciting.”

There’s no doubt Saturday’s game will be meaningful for all of the Hurricanes who take the field. The Miami-Florida State matchup has always been, and will always be, special.

That’s not an opportunity any of them take for granted.