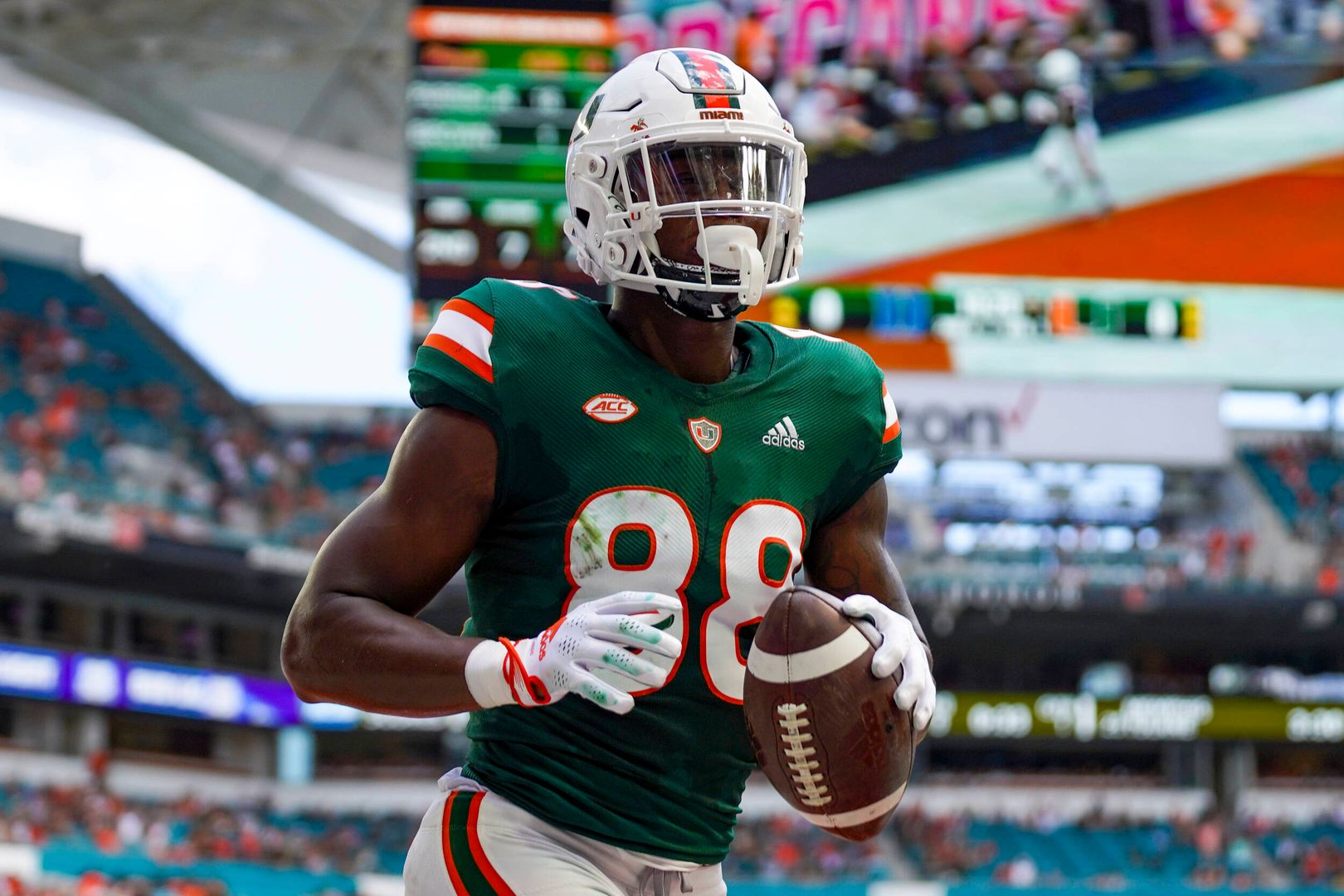 But the remainder of the game against Duke was played uphill, a struggle to overcome eight turnovers that led to 31 points for the Blue Devils. Ultimately it was too much to overcome as the Canes dropped a 45-21 decision to Duke before 57,421 at Hard Rock Stadium.

Duke entered the game ranked first in the nation in fumble recoveries with 10 and tacked on five more Saturday, adding three interceptions of quarterback Jake Garcia, who replaced an injured Tyler Van Dyke in the second quarter.

“We built our own hole and we just kept digging it deeper,” head coach Mario Cristobal said.

After the Canes rallied early in the second half to turn a 17-7 halftime deficit into a 21-17 lead, Duke scored the game’s final 28 points. Miami’s defense held the Blue Devils to 336 total yards – 202 fewer than they amassed last week against North Carolina. But Duke’s average starting field position was its own 46-yard line and five of their six offensive scoring drives were five plays or fewer.

“We’ve made some progress in certain areas,” Cristobal said. “But that wasn’t. That was regression. After a fast start, and then in the second quarter, taking a dive. The third quarter, we came out and played with some good passion, executed well, took the lead in the game. They came back, they drove  and they scored, and then after that, all out of sorts.”

Miami’s defense pounced early on; in fact, on just the second snap of the game as Leonard hit wide receiver Jalon Calhoun for a 20-yard gain, but safety James Williams forced the ball loose and recovered at the Duke 46.

After two Van Dyke completions, Parrish gobbled up 15 yards to the Duke 17. Three plays later the Canes faced a 4th and 1 but quarterback Jacurri Brown picked up the first down on a direct snap. Two plays later Van Dyke lofted a scoring toss to a wide-open Young in the back of the end zone and Miami had a 7-0 lead.

The Canes forced a three-and-out and got the ball back at their 26. Van Dyke went back to work, finding Young for 20 yards. After a personal foul penalty on the Blue Devils, the Canes faced another 4th and 1 at the Duke 23. This time the Blue Devils’ defense held.

Miami forced another punt but then came the turnovers. Running back Jaylan Knighton fumbled on a screen pass, and linebacker Shaka Heyward returned it 26 yards to the Canes 23. On 3rd and goal from the nine-yard line Leonard ran it into the end zone and the game was tied early in the second quarter.

Wide receiver Key’Shawn Smith fumbled the ensuing kickoff and Duke recovered at the Miami 22. Four plays later Leonard had his second rushing touchdown – this one from five yards out – and the Blue Devils had their first lead of the game.

The teams exchanged punts and the Canes got the ball back at their 21. On 3rd and 4, Duke linebacker Cam Dillon blitzed from the left side and sacked Van Dyke, who fumbled the ball, which was recovered by Johnson at the Miami 10. Van Dyke was shaken up on the play.

But the Canes’ defense held as linebacker Caleb Johnson sacked Leonard on 3rd and goal. Duke settled for a 28-yard field goal by Todd Pelino and pushed its lead to 17-7.

Garcia entered the game at quarterback and on his second drive led Miami across midfield. But on 1st and 5 from the Duke 30, Johnson sacked Garcia for a nine-yard loss. The Canes called their final timeout with 18 seconds left. On the next snap safety Jaylen Stinson picked off Garcia and the Blue Devils kept their 10-point cushion at halftime.

Miami outgained the Blue Devils 141-110 in the first half, but Duke’s longest scoring drive was just 23 yards.

Two plays into the second half, the Canes sprung back to life as Garcia hit Young streaking down the right sideline for a 71-yard touchdown pass. Miami was quickly back within three points.

On Duke’s next offensive snap Leonard connected with wide receiver Eli Pancol but Ivey forced a fumble and recovered it at the Blue Devils 39. Three plays later Garcia found Will Mallory wide open in the right flat and the tight end rumbled 34 yards for a touchdown. Less then two minutes into the second half the Canes had flipped a 10-point deficit into a four-point lead.

Leonard converted a key 3rd and 13 to open the next drive with a 19-yard completion to running back Jordan Waters, and then hit Bancol for 21 yards on 4th and 9 from the Miami 39. The Blue Devils overcame an offensive pass interference call inside the 10-yard line and scored on a two-yard shovel pass from Leonard to tight end Nicky Dalmolin to cap an 18-play drive and retake the lead with 3:38 left in the third quarter.

The Canes crossed midfield on the ensuing drive but on 4th and 3 from the Duke 44 Garcia threw incomplete. Moore scampered 31 yards on the next play and Leonard capped a five-play drive with his third rushing score of the day. Duke’s lead was back up to 10 points.

Safety Darius Joiner hit Garcia in the backfield on the next drive, forcing a fumble that Dillon recovered at the Miami 25. Four players later Waters bulled in from two yards out and Duke’s lead ballooned to 38-21.

Brandon Johnson picked off Garcia with 5:25 remaining and returned it 29 yards to cap the scoring. Defensive tackle Dewayne Carter then recovered a fumble at the Miami 30 to end the Canes’ final drive.

“The best way to build good morale is to have success and performance,” Cristobal said. “The best way to do that is to go back to work and work on the things that need to get better. They’re identified. There is some progress in some. But today, regression showed up. And that’s the point that’s disappointing. There’s a lot of stuff that has shown up over the last couple of weeks that made us feel that we were going to have a positive performance today.”

Miami next heads to Charlottesville, Va., to face Virginia. Kickoff is 12:30 p.m.

Mario Cristobal meets with the media after Miami's game against Duke.