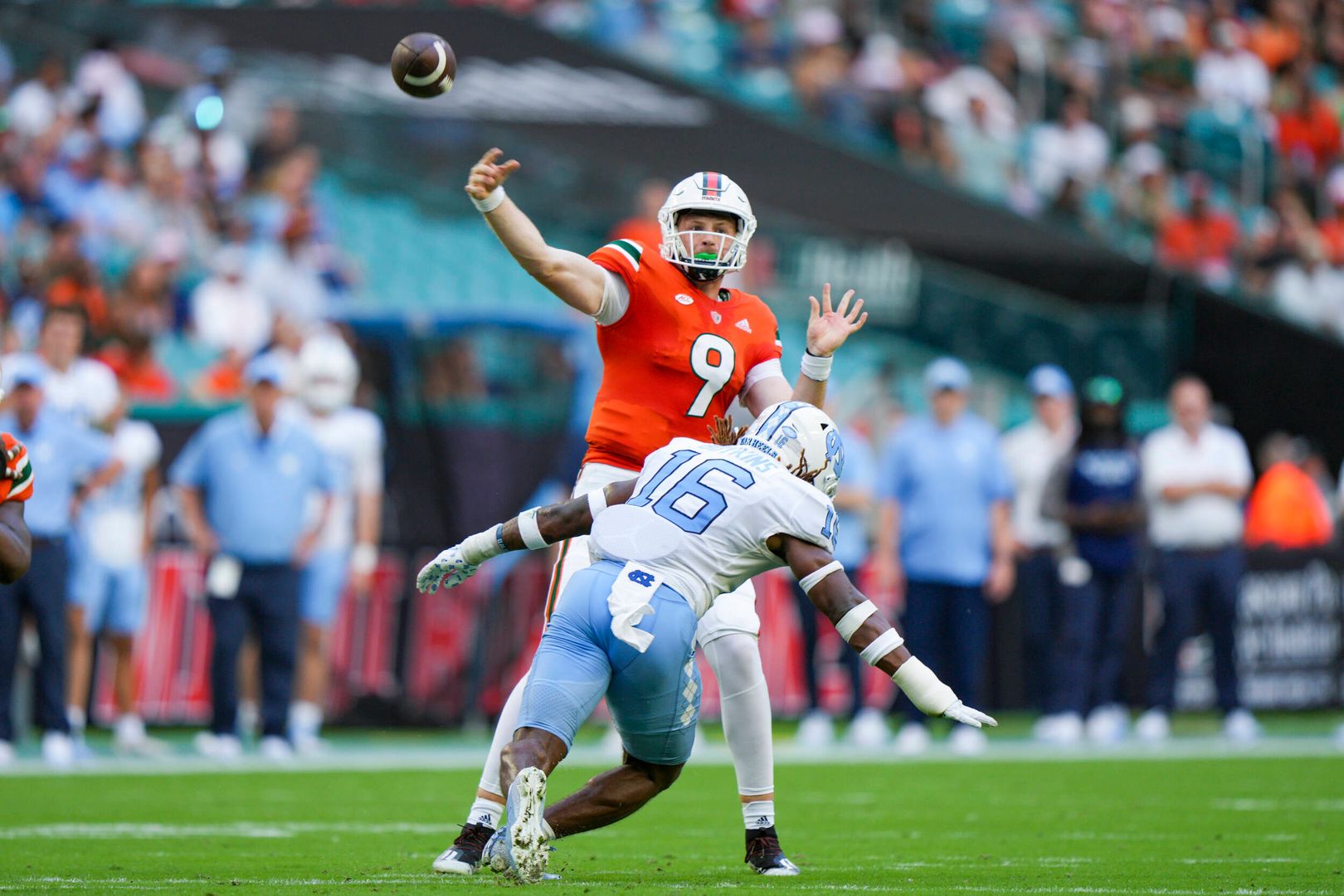 Canes Rally but Tar Heels Hang On for 27-24 Win

MIAMI GARDENS, Fla. – Early on Saturday against North Carolina, the Miami Hurricanes seemed to be following a similar script to their last home outing.

There was a double-digit first half deficit. There were two 90-plus-yard drives by the opposition, buoyed by long completions.

Yet this time the Canes were resilient, undeterred and continued to fight back. Quarterback Tyler Van Dyke was terrific, throwing for nearly 500 yards and three scores. Tight end Will Mallory had a career day, catching eight passes for 115 yards. Miami’s defense picked off UNC quarterback Drake Maye twice and sacked him five times. And the Canes got the ball back in the game’s final minute with a chance to tie or win the game.

But one last throw by Van Dyke was intercepted deep in North Carolina territory and the Tar Heels held on for a 27-24 win before a crowd of 53,751 at Hard Rock Stadium.

UNC improved to 5-1, 2-0 in ACC play, while Miami fell to 2-3 after dropping its conference opener.

“Proud of the effort. You saw it. Guys were grinding. They kept coming, no matter what. They really had the right attitude and the right mentality.”

Van Dyke completed 42 of 57 passes for 496 yards, setting the school record for completions and attempts. His 496 passing yards are second only to Stephen Morris’ 566 against NC State in 2012. His 42 completions are the most by an ACC quarterback since NC State’s Ryan Finley had 45 in 2017.

Miami ran 80 plays but again struggled to rush the ball, managing just 41 yards against a UNC defense that entered the game ranked 113th in the nation in rushing defense. And while the Tar Heels were 7 of 14 on third down, the Canes converted just 5 of 14.

“We’re out of sync in the run game,” Cristobal said. “It’s not a matter of effort but we’ve got to do a better job.

“We’ve got to continue to work on issues that are preventing us form being really good.”

Maye threw for 309 yards and two scores in addition to his two picks, and also rushed for 53 yards. Wide receiver Josh Downs caught six passes for 69 yards and one touchdown. Linebacker Power Echols racked up 14 tackles.

Miami crossed midfield on the opening drive of the game before stalling. But Lou Hedley pinned the Tar Heels at their five-yard line. North Carolina moved the chains twice on third down before facing 3rd and 3 from its 26. Maye hit wide receiver J.J. Jones down the left sideline for a 74-yard touchdown toss and the Tar Heels had a 7-0 lead.

The Hurricanes picked up the tempo on their next drive as Van Dyke completed three straight passes to move the ball to Carolina’s 30. But linebacker Noah Taylor sacked Van Dyke on 3rd and 5 and Andres Borregales hooked a 53-yard field goal to the left.

On the next drive the Tar Heels faced a 4th and 1 at the Miami 46 and Maye scrambled 33 yards to put UNC in the red zone. But the Canes defense held, forcing an incompletion on 4th and 5 and took over at their eight-yard line.

Van Dyke found running back Jaylan Knighton streaking down the right sideline for 41 yards to the UNC 22. Two personal foul penalties on the Tar Heels moved the ball to the two-yard line and UNC’s defense stopped the Canes on three straight runs. On fourth and goal Van Dyke’s pass to Mallory fell incomplete.

Maye went back to work, again scrambling for a first down before connecting on three straight passes, including a 52-yard strike to wide receiver Antoine Green down to the Miami 2. Two plays later running back Omarion Hampton bulled his way into the end zone and the Tar Heels had a two-touchdown lead.

Miami marched right back as Van Dyke found Mallory for a 31-yard gain to the UNC 41. Three plays later Van Dyke hit Smith on a crossing route for 20 yards and the Canes were on the scoreboard.

The Tar Heels responded, moving to the Miami 37 before Maye converted a 4th and 8 pass to Downs for 22 yards. Two plays later Maye found Downs again, who caught the ball at the 10 and then pinballed his way into the end zone to restore UNC’s 14-point lead with 1:31 left in the first half.

The Canes wasted no time getting down the field — and converted a key fourth down of their own as Van Dyke connected with Mallory for 22 yards on 4th and 2 from the UNC 26. Two plays later Van Dyke scrambled right, fought off defensive tackle Myles Murphy and hit Parrish for a seven-yard touchdown. North Carolina’s lead was trimmed to 21-14 with 28 seconds left in the half.

Instead of running out the clock Maye threw on first down and was picked off by Smith and Miami suddenly had the ball at UNC’s 49. Van Dyke ran for eight yards, completed two quick passes and set up Borregales for a 38-yard field goal that made the halftime score 21-17.

Tyler Van Dyke talks to the media after Miami's game against North Carolina.

After yielding 328 total yards in the first half, Miami held North Carolina to just 142 yards in the second half.

“We showed more discipline in the second half and started executing at a higher level,” Cristobal said.

The Tar Heels advanced into the red zone but linebacker Corey Flagg and defensive lineman Nyjalik Kelly teamed up to sack Maye and hold UNC to a 38-yard field goal by Noah Burnette. North Carolina’s lead was back to seven.

The teams exchanged punts before the Canes took over at their 18. Van Dyke hit Mallory again for 23 yards and then connected with Michael Redding III for 16 yards and 4th and 2 from the Miami 49. The Canes faced another fourth down at the UNC 26, but Knighton fumbled after getting past the sticks and defensive back Giovanni Biggers recovered. The Tar Heels took over at their own 17 with 12:31 remaining.

UNC picked up two key third downs on swing passes and Maye rushed twice for 23 yards. The drive ultimately ended at the Miami 2 but Burnette kicked a 19-yard field goal. The Tar Heels led by 10, and perhaps more importantly, there was just 4:10 remaining after the 17-play drive.

But the Canes weren’t done. Van Dyke led Miami on a seven-play, 63-yard drive, capped by a gorgeous 16-yard throw to Young in the back of the end zone. The Canes were within three points with 2:20 left on the clock.

And then came some special teams sorcery from Borregales, whose onside kick bounced over a UNC player’s head and headed towards the sidelines. Cornerback Al Blades, Jr. dove to keep it in bounds and tight end Seth Parrott recovered for the Canes. But on replay the officials ruled that Blades stepped out of bounds before touching the ball and the Tar Heels took over at their own 44.

Miami used its final two timeouts, forced a punt and took over at its own 10 with 1:14 remaining. The Canes reached the North Carolina 47 but Boykins intercepted Van Dyke’s final pass of the evening with eight seconds left to seal the win.

Miami next hits the road to face Virginia Tech in Blacksburg next Saturday at 12:30 p.m.