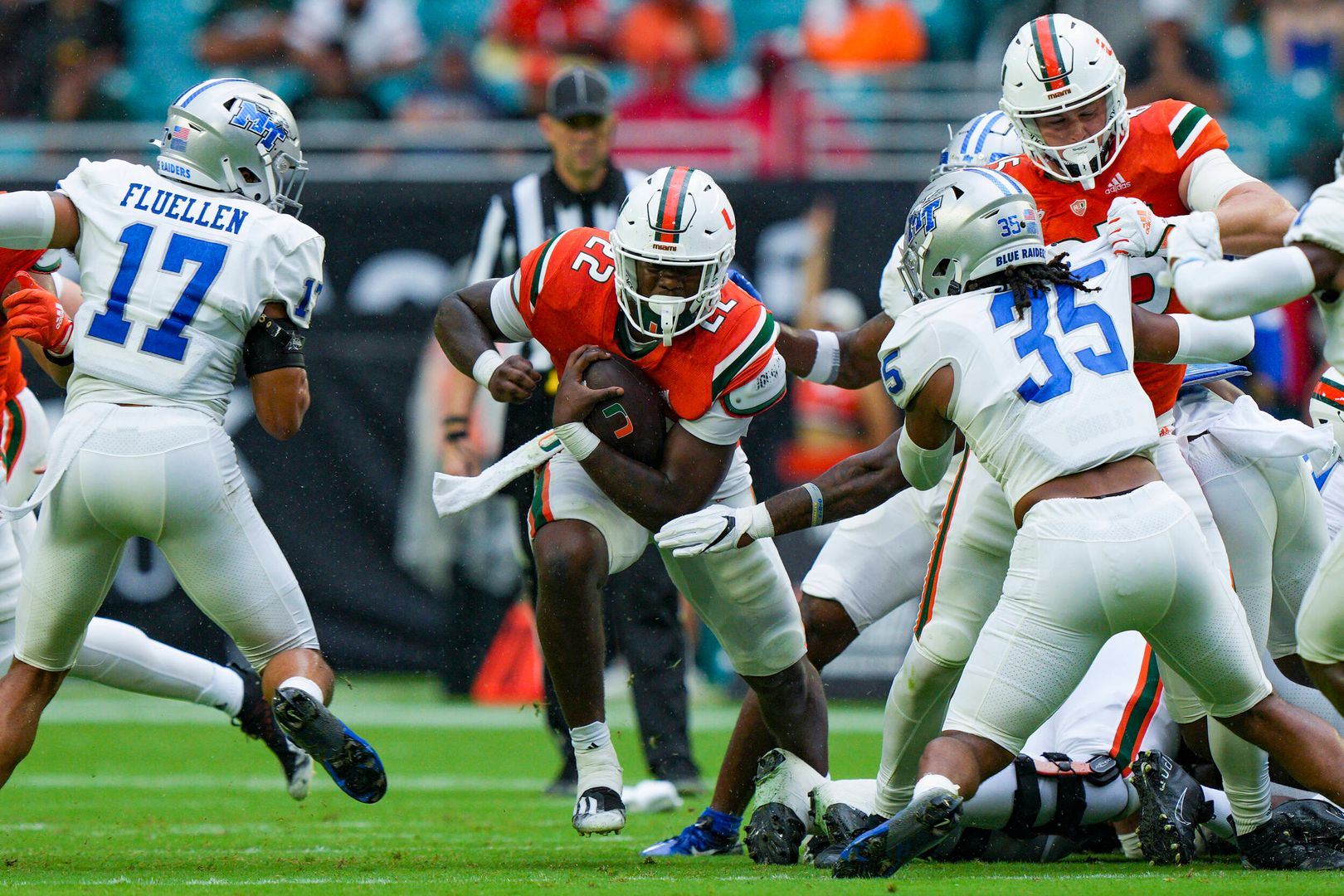 MIAMI GARDENS, Fla. – Throughout the week the Miami Hurricanes talked about bouncing back, putting last Saturday’s tough loss at Texas A&M behind them and continuing to improve towards their home matchup with Middle Tennessee State.

But the Blue Raiders came up with big play after big play this afternoon at Hard Rock Stadium – long passes, takeaways and fourth-down stops. The Hurricanes would respond and inch closer, but MTSU never flinched. In the end there were too many big plays to overcome, and Miami suffered a 45-31 defeat before a crowd of 46,713 at Hard Rock Stadium.

The Canes fell to 2-2 on the season, while the Blue Raiders improved to 3-1.

“We all came here for a purpose and a reason, and we’ve got a lot of work to do.”

MTSU’s first four offensive touchdown drives averaged 2.5 plays and 40.5 seconds as the Canes yielded touchdown passes of 71, 69 and 98 yards, plus an 89-yard catch and run that led to another touchdown. Miami had three turnovers in its first seven snaps from scrimmage. And two Miami drives ended on fourth down incompletions inside the MTSU five-yard line.

Quarterback Jake Garcia, who replaced Tyler Van Dyke in the second half, completed 10 of 19 passes for 169 yards. Van Dyke completed 16 of 32 throws for 138 yards with one touchdown and two interceptions. Thaddius Franklin, Jr., had 36 yards and two rushing scores. Frank Ladson, Jr. paced the Canes with six receptions for 65 yards, while fellow wideout KeyShawn Smith racked up 299 all-purpose yards, including a 91-yard kickoff return for a touchdown. Linebacker Corey Flagg led Miami with eight tackles, including a sack, while safety Kamren Kitchens picked off a pass.

The Canes, who had been averaging 5.1 yards per rush through their first three games, averaged just 1.6 yards against the Blue Raiders.

“Our run game was nowhere near what it has been,” Cristobal said. “They had an extra man in the box but we still didn’t block them as well as we needed to.”

Miami never led, falling into an early 10-0 hole. The Canes trailed by 14 at halftime and could not get any closer.

MTSU crossed midfield on the game’s opening drive but stalled and pinned Miami back at its 11. On the next snap cornerback Decorian Patterson picked off Van Dyke and gave the Blue Raiders the ball at the Canes 13. But Miami’s defense stiffened and MTSU settled for a 28-yard field goal by Zeke Rankin to open up the scoring.

On the ensuing drive defensive end Jordan Ferguson tipped Van Dyke’s pass and snagged it out of the air, rumbling 15 yards for his second career touchdown. Just under five minutes into the game MTSU had a 10-point lead.

The Canes moved the ball to their own 38 but running back Jaylan Knighton fumbled and MTSU’s Zaylin Wood recovered. On the next snap Kitchens made a diving interception, picking off Cunningham and handing Miami the ball back at its own 32. The Canes responded with a 47-yard drive that ended with a 39-yard field goal by Andres Borregales to cut the deficit to seven.

Miami again drove inside the MTSU 20 and faced 4th and 4 at the six-yard line. But Van Dyke couldn’t connect with tight end Will Mallory and the Blue Raiders took over on downs. Two plays later Cunningham hit Lane on an 89-yard catch and run to the Canes 5. Cunningham capped the drive with a nine-yard scoring run and the lead was 21.

Right before the half the Canes went on a 15-play march and finally found the end zone. Van Dyke connected with running back Henry Parrish, Jr. on a fourth down swing pass for a six-yard touchdown. MTSU led 24-10 at intermission.

The Blue Raiders pushed their lead back to 21 when Cunningham found wide receiver Elijah Metcalf for a 69-yard touchdown. The Canes turned to Garcia at quarterback and he led Miami down the field quickly, completing passes of 23 yards to Mallory and 39 yards to Smith. Franklin capped the five-play, 72-yard drive with a one-yard touchdown plunge. The lead was cut back to 14.

Miami’s defense forced a three and out – sacking Cunningham on consecutive plays – and got the ball back at its own 32. The Canes drove 11 plays down to the MTSU one-yard line but on fourth down Garcia’s pass to Mallory fell incomplete. On the very next snap Cunningham found England-Chisolm streaking down the left sideline again, this time for 98 yards and a 38-17 MTSU lead.

“They started getting us on explosive plays,” Cristobal said. “They got us on, I believe, three 60-plus yard touchdowns, caught us in man coverage and got behind us.”

The Canes didn’t take long to respond as Smith returned the ensuing kickoff 91 yards for a touchdown. Miami trailed 38-24 with 14:34 remaining. But Cunningham led the Blue Raiders on their first time-consuming touchdown drive of the game, picking up a key third down with a 12-yard scramble. Running back Frank Peasant dove in from a yard out to cap the 12-play, 75-yard drive that consumed 5:46 of the fourth quarter.

The Canes answered with a quick scoring drive as Franklin bulldozed into the end zone for his second one-yard touchdown of the game. The lead was back down to 14 with 6:05 remaining. Miami tried an onside kick, but the Blue Raiders recovered at the Canes 48.

Miami has a bye this coming week and returns to action October 8 against North Carolina at Hard Rock Stadium, the first of eight consecutive ACC games.