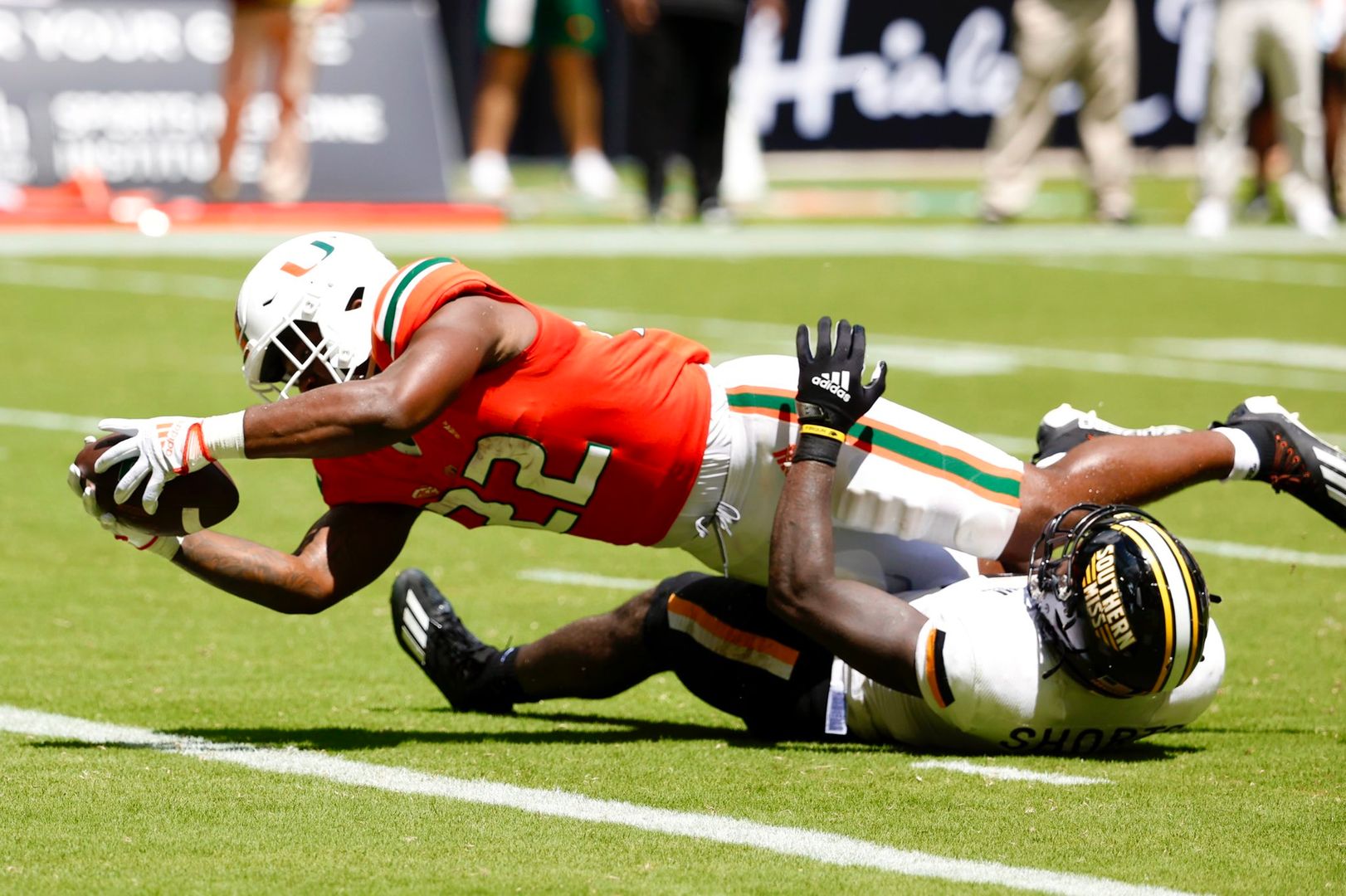 After leading 10-7 at halftime Miami took command of the second stanza, outscoring the Golden Eagles 20-0 en route to a 30-7 win before a crowd of 46,421 at Hard Rock Stadium. The 15th-ranked Hurricanes improved to 2-0 while Southern Miss fell to 0-2.

Over the game’s final 30 minutes Miami held the ball for more than 20 minutes, rushed for 130 yards, limited the Golden Eagles to just 91 total yards and 0.4 yards per rush, and forced three turnovers.

“There were some pretty good halftime adjustments particularly by the defense to go out and have the type of second half that they had,” head coach Mario Cristobal said. “They shut down the run and shut down the pass. Offensively we got going. We scored 20 points in the second half but we didn’t finish drives.

“I thought we’d be a little bit more polished in the first half but we weren’t. And so, what do you do? You go in there and you fix it and you come out and I think we did a decent job in the second half. We did a great job on defense in the second half.”

Quarterback Tyler Van Dyke completed 20 of 30 passes for 241 yards with one interception and one touchdown, a 35-yard strike to wide receiver Key’Shawn Smith. Running back Henry Parrish, Jr. led the Hurricanes on the ground with 102 yards and one score, averaging 4.9 per carry. Leonard Taylor (one sack, two TFLs) and Antonio Moultrie (two tackles, one forced fumble) paced a formidable showing by Miami’s defensive front. And Andy Borregales connected on all three of his field goals, including a 48-yarder.

Quarterback Zach Wilcke completed 16 of 27 passes for 207 yards with one score and one pick for the Golden Eagles. Running back Frank Gore, Jr., who rushed for a career-high 178 yards in USM’s loss to Liberty last week, was held to 10 yards on seven carries. Overall, Southern Miss had just 24 rushing yards on 23 carries.

“They are a gap team, they are a wide zone team, they are a split zone team,” Cristobal said. “The best way to stop that is to take those gaps with those big guys – they’re about 320 across the board – and come out of your hips and press those holes. I think our guys did a fairly good job of that and when they tried to go wide zone, our perimeter players played with tremendous burst and acceleration and got guys on the ground.”

The Hurricanes started the second half by forcing a three and out and then embarking on a 74-yard drive in which 10 of their 13 plays were runs. Running back Thaddius Franklin, Jr., capped the journey with a seven-yard rumble into the end zone to give Miami a 17-7 lead.

“When the Canes run hard, we are hard to stop and it opens up everything for us as we continue to grow and mature at the wide receiver position,” Cristobal said.

Taylor disrupted the Golden Eagles’ next drive – registering a tackle for loss and sack on consecutive snaps – and Southern Miss was forced to punt again. Cornerback Tyrique Stevenson set his team up with great field position with a 30-yard punt return to the USM 45 and on the next play Van Dyke and Parrish teamed up for a flea flicker scoring strike to Smith. Miami suddenly had a 17-point lead.

“The flea flicker (Tyler) threw on the money and he had some other really good throws as well,” Cristobal said.

Southern Miss responded by driving all the way to the Hurricanes six-yard line, but Stevenson picked off Wilcke in the end zone. After the teams exchanged punts, Parrish had a long touchdown run negated by a penalty and the Hurricanes settled for a 33-yard field goal from Borregales to push the lead to 27-7.

Moultrie forced a fumble on Southern Miss’ next possession, which was recovered by fellow lineman Chantz Williams at the USM 44. Borregales then hit his third field goal of the day – this one a 48-yarder – to give Miami its final points of the afternoon.

After going three and out on their opening possession of the game, the Hurricanes faced a 3rd and 10 on their second drive of the game. But Van Dyke connected with wide receiver Brashard Smith, who made a leaping, juggling catch for 29 yards to put Miami in business at its 49-yard line. Twelve plays later, Borregales hit a 30-yard field goal to put the Hurricanes up 3-0.

But the Golden Eagles answered right back as Wilcke lofted a 32-yard touchdown pass to wide receiver Jason Brownlee, capping a seven-play drive and giving Southern Miss a 7-3 lead just 30 seconds into the second quarter. Brownlee finished with 102 yards on five catches.

The Hurricanes reached the Southern Miss 33 on their ensuing drive, but on 4th and 4 safety Malik Shorts picked off Van Dyke. Two plays later Wilcke hit running back Demarcus Jones for 36 yards to give the Golden Eagles a first down at the Miami 32. Defensive lineman Jacob Lichtenstein stalled the drive with eight-yard sack and Southern Miss was forced to punt. The two teams then traded punts and Miami got the ball back at its own 14 with 3:12 remaining in the half.

Van Dyke went to work and spread the wealth, hitting Restrepo for 11 yards, Redding for 16 yards, Smith for 11 and Romello Brinson for 18 yards down to the one-yard line. Parrish capped the drive with an end zone leap and the Hurricanes had reclaimed a lead they would not relinquish.

The Hurricanes next head to College Station, Texas, next Saturday for a prime-time showdown with No. 6 Texas A&M. Kickoff is 9 p.m. on ESPN.