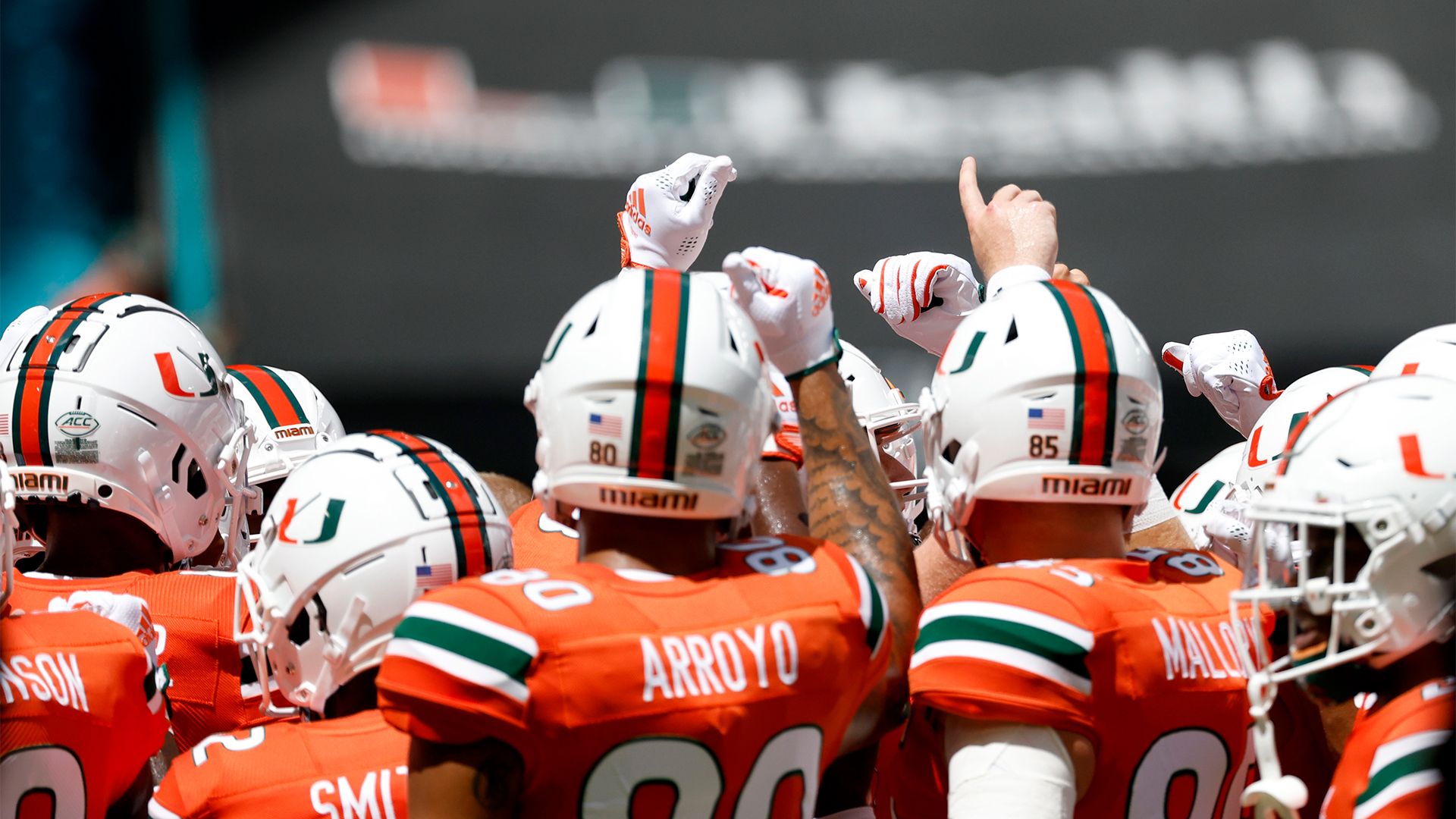 Takeaways from Miami's Win over Bethune-Cookman

MIAMI GARDENS, Fla. – It was, in so many ways, a memorable way to start the season.

The Hurricanes put together a balanced offensive performance. Their defense forced key turnovers. More than a few new faces made a big impression and Mario Cristobal – the former two-time national champion offensive lineman who returned to his alma mater last December – won his debut as Miami’s head coach.

In the end, the Hurricanes left Hard Rock Stadium on Saturday with a 70-13 win over Bethune-Cookman – and an idea of how months of training have prepared them for the season.

“Obviously, the goal overall was to be 1-0 by 7:15 tonight and that was achieved,” Cristobal said after the win. “There were a lot of bright spots. Certainly, things showed up in a positive way in terms of physicality and conditioning and execution, in particular on the offensive side of the ball. Overall, I thought we played relatively hard.”

As 16th-ranked Miami begins turning its focus to next week’s game against Southern Miss, here’s some of what the Hurricanes can take from their opener against the Wildcats…

1. The Cristobal era begins with a big win

In the months and days leading up to Saturday’s opener, Cristobal – a former player, graduate assistant and assistant coach at Miami – tried to downplay the significance of his homecoming.

Instead, Cristobal stressed that his focus was on making sure Miami’s players, assistant coaches and staff were ready to be at their best once the game began.

Ultimately, the Hurricanes started the season 1-0, Miami’s fans had a chance to celebrate Cristobal’s debut and a new era of Hurricanes football began in memorable style. 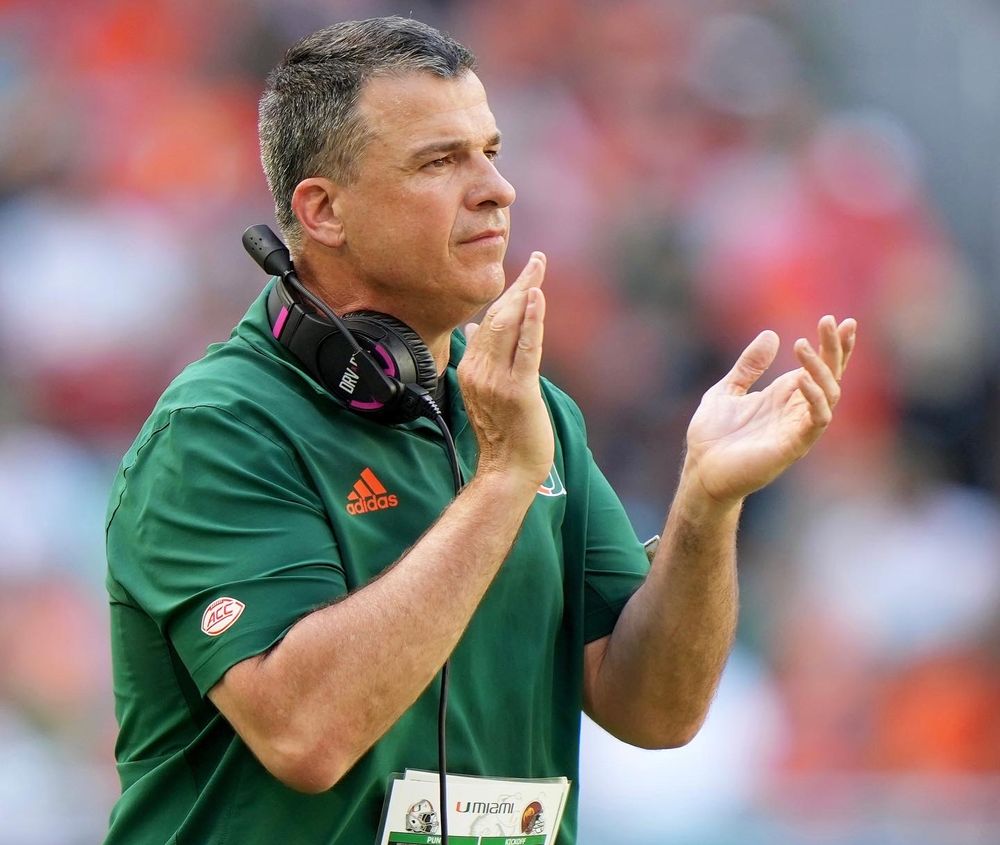 Still, when asked again about what his first game back at Miami meant to him personally, Cristobal reiterated – again – the moment wasn’t about him.

It was about the players who’ve embraced the program he and his staff have brought to Coral Gables.

“Some people say things to sound cool during a press conference, but I don’t. The last thing in the world on my mind is me. I’m talking about the very last thing on my mind,” Cristobal said. “When there is change, change is difficult and especially a blueprint like this which demands a lot. They’ve done a really good job of taking it on and they want to see the results as much as anyone else, but we need to stay process oriented…In terms of me getting stuff out of the way, nah brother. I’m sure a lot of our guys would’ve liked to keep playing. They did a good job tonight.”

2. A balanced offense was efficient and effective

The Hurricanes delivered a masterful offensive performance against the Wildcats, totaling 605 yards and scoring touchdowns on nine of 10 red-zone opportunities.

Miami rushed for 305 yards in the win and quarterbacks Tyler Van Dyke and Jake Garcia combined for 300 passing yards and three touchdowns. Neither was sacked all afternoon.

And Miami’s receivers – who worked to improve their consistency throughout fall camp – delivered, none of them dropping any of the passes thrown their way.

“We like to be a balanced offense and we want to score as many points as we possibly can while having control of the game, which I think is really important,” Cristobal said. “You have to play this thing as a team. Sometimes, you go light it up and go tempo and light that thing up for a bunch of points. And sometimes, you have to play to the strength of your team, which might be helping the defense out some. Today was a good example of having a balanced offense and just continuing to keep our foot on the gas.”

3. Running backs step up in wake of injuries

The Hurricanes took the field Saturday without two of their most experienced running backs, Jaylan Knighton and Donald Chaney, Jr., both of whom were nursing injuries. 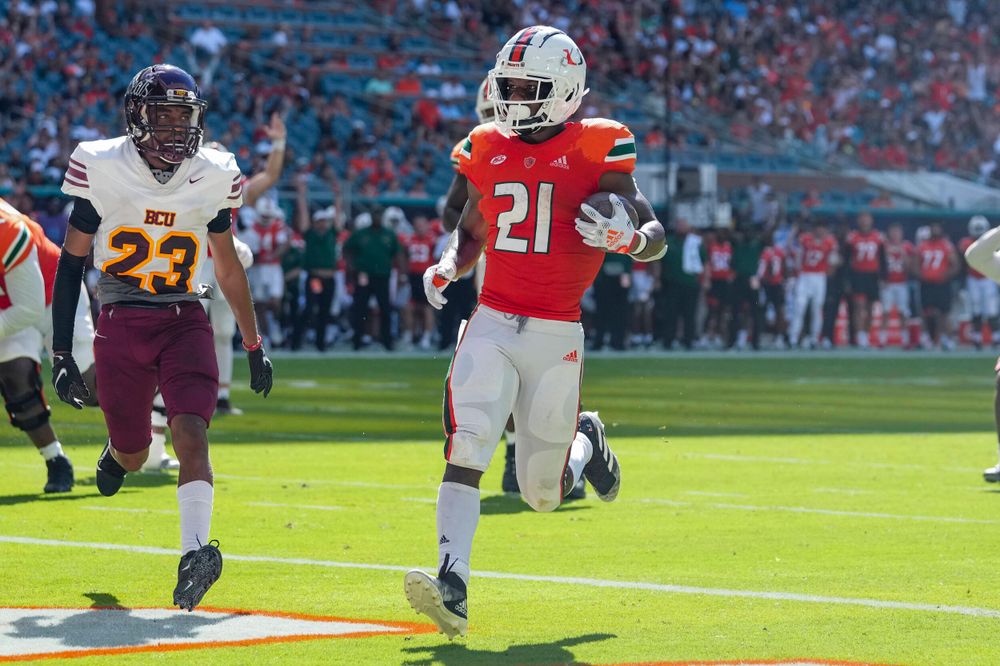 “The offensive line took control of the line of scrimmage and the backs ran hard. We got downhill in the form of power,” Cristobal said of the run game’s performance. “We train these elements all day long and that was like a very nice day for us out there compared to what we’ve been practicing.”

The Hurricanes know they have a series of talented players in their defensive backfield and on Saturday, three of them delivered.

Sophomore safety Kamren Kinchens finished with three tackles and notched the first of three interceptions for the Miami secondary on Saturday. The Bethune-Cookman turnover led to a Miami touchdown in the first quarter.

Four possessions later, Gilbert Frierson intercepted Bethune’s Tyrone Franklin and scored, pushing Miami’s lead to 28-3 after the extra point. And late in the third quarter, James Williams snagged an interception of his own that also led to a Hurricanes touchdown.

Parrish and Stanley weren’t the only transfers that had an impact on Saturday’s win.

After the win, Mesidor couldn’t help but smile when talking about his first game as a Hurricane – and said he couldn’t wait to see what the rest of the season holds.

Third-year sophomore Key’Shawn Smith was one of Miami’s go-to receivers last season, starting in all 12 games and totaling 405 yards and three touchdowns.

On Saturday, another part of his game emerged.

The speedy Smith totaled 184 yards on three kickoff returns, including a long return of 72 yards. He nearly added to Miami’s point total, too, narrowly stepping out of bounds on one return that was nearly a touchdown. 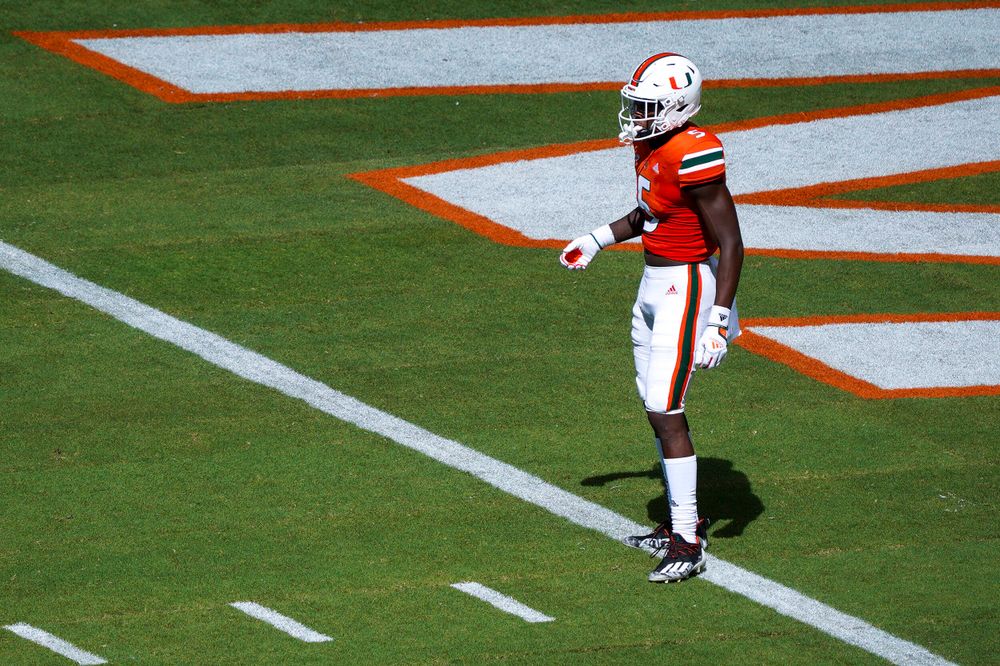 Afterward, Cristobal had plenty of praise for Smith.

“I mean he has excelled at it if you watch tape on different parts of his high school career,” Cristobal said. “We spent a lot of time working on a couple of particular returns. But there are about three or four guys back there that have shown that they can hit and he’s one of those guys that when he goes, he just goes. It was a really good job by the kickoff return team and not to mention a very special mention to Andy [Borregales] because I believe he had nine or 10 touchbacks today and that makes things very different in terms of field position.”

It wasn’t just Borregales’ touchbacks that made a difference in Saturday’s win.

8. Cutting down on penalties will be a focus

A season ago, the Hurricanes averaged 72.3 penalty yards per game.

They cut down on that number Saturday, totaling six penalties for 48 yards, but for Cristobal, that was still too many.

During the broadcast, cameras captured the head coach chastising Miami’s defense after Kinchens was whistled for unsportsmanlike conduct in the wake of his interception.

After the game, Cristobal praised Kinchens’ effort and leadership, but stressed the penalty was a teachable moment for all of the Hurricanes.

“You have to knock that out. Rules are rules. We don’t play football on our own terms. We play football on the rules terms,” Cristobal said. “Kam Kinchens is a great human being, a great player, and a great team leader. He was excited and [got] caught up in the moment, but we have to conduct ourselves in a manner where we are used to doing that, where we expect to do that. And now, you know what we need to do? We need to get our teammates and the rest of that stadium rocking and fired up. The self-glorification stuff, he’s not that. He’s a really good guy. But you know what? It’s all about the teaching moments and that’s what we’re here for. We’ll learn and move forward.”

Ahead of Saturday’s game, Cristobal didn’t want to discuss the possibility that much of the roster could potentially see playing time against Bethune-Cookman, which didn’t play football in 2020 and struggled to a 2-9 record last season. 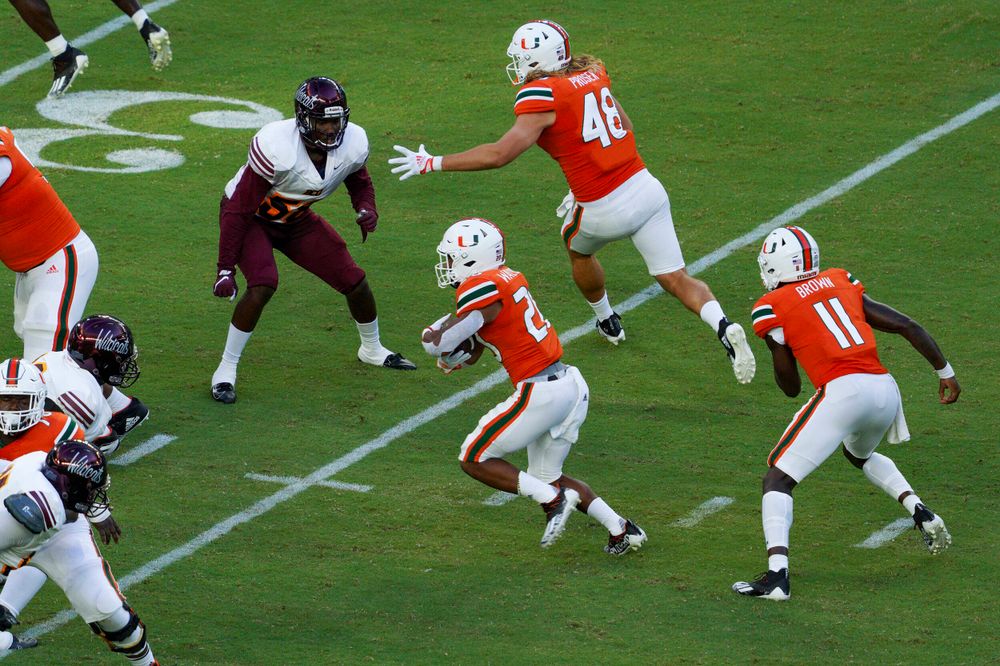 But Miami’s 42-10 eventual halftime lead paved the way for quite a few Hurricanes to get on the field – and make plays.

All of that experience, Cristobal said, will only help Miami’s players as the season continues.

“The valuable part is the validation of, if you work hard enough and earn playing time, you are going to play at some point in time, whether you’ve earned first-team reps or second and third-team reps. And then, what is also validated is the fact that when they did get in there, they executed,” Cristobal said. “You know, they moved the ball down the field and got after the quarterback on the other side and covered down pretty well. It’s positive and it’s progress and the best part about it is that we are going to get in there tomorrow and start really highlighting the things that aren’t good enough. You don’t want to feel your consequences, right? You want to learn your lessons along the way and film like this is a good opportunity.”

10.  Time to focus on Southern Miss

Now that their highly anticipated season opener is behind them, the Hurricanes can turn their focus to their next opponent: Southern Miss.

The Golden Eagles, who went 3-9 last season, are coming off a four-overtime loss in which the son of a Miami legend posted a career performance.

Frank Gore Jr. had a career-high 32 carries for a career-high 178 yards in the Golden Eagles’ eventual 29-27 loss to Liberty and next week, he’ll be one of the players Miami will have to focus on containing.

Cristobal made it clear immediately after the Bethune-Cookman win that the Hurricanes would begin preparing for the Golden Eagles immediately.

“We took control of the game early and I am really proud of the second and third-team guys who went in there and executed at a high level and sustained the momentum to close out the football game,” Cristobal said. “We’re 1-0 and there were some good things and some stuff to work on. We’re looking forward to getting back to work tomorrow.”