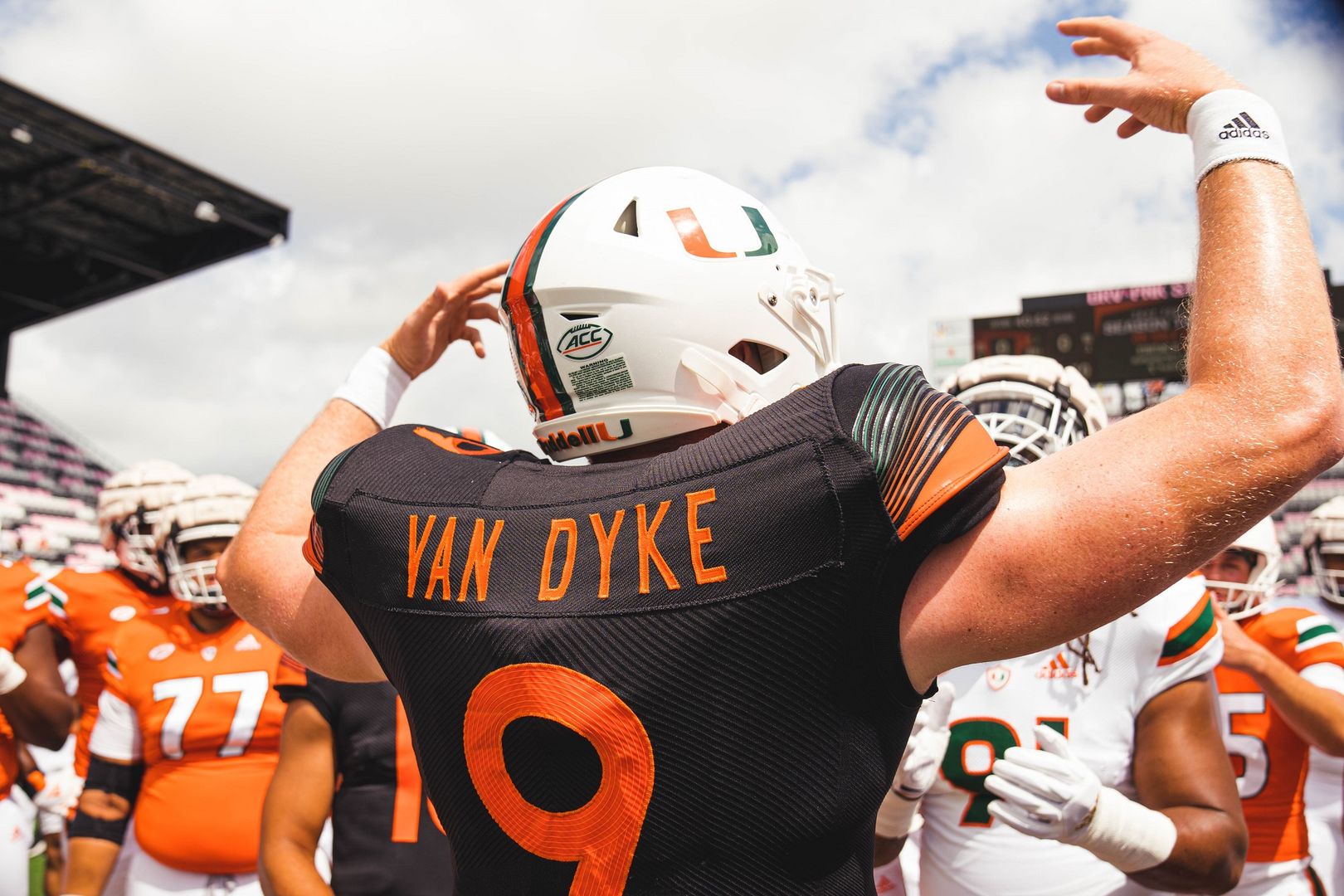 CORAL GABLES, Fla. – It’s a moment that’s been months – some might say years – in the making.

When the Hurricanes take the field at Hard Rock Stadium on Saturday afternoon for their season opener against in-state foe Bethune-Cookman, it will mark the start of a new era.

A talented quarterback will look to build on a remarkable rookie season. Some new faces will don orange and green for the first time. And a former two-time national champion offensive lineman will again run through Miami’s famed smoke, this time as his alma mater’s head coach.

But as special as that moment may be, Mario Cristobal insists it should not be about him.

His focus, as it has been since he returned to Coral Gables last December, is on the 16th-ranked Hurricanes – the players, the coaches and the staff that he wants to be in a position to succeed, not just on Saturday, but on every day that will follow, too.

“I think I’m the smallest part of this thing, as small as it could be,” Cristobal said this week. “It’s about making sure I’m doing all the things to make sure our players, our coaches, our administrators, our recruiting department, development department, you name it, analysts, [graduate assistants], everybody can do their job at the maximum level as we put together this game plan – which is already in place and we’ve practiced for a couple of days – so we can operate at a really high level and always get the players the best chance to be successful…

“I have to make sure I do my job and stay in my job and make sure we get to game day and work through the game and beyond, so again, we can have the best chance to always come out 1-0. I’m simple. And boring. You don’t have to worry about me getting caught up in anything.”

The Hurricanes have already learned first-hand how process-oriented and driven their coach is.

He helped bring former Stanley Cup winner Eric Renaghan to Coral Gables to work with strength and conditioning coordinator Aaron Feld as the head of Miami’s new sports science department. He added Pro Football Hall of Famer and Miami Dolphins legend Jason Taylor as an analyst. And he has worked closely with Hurricanes great Alonzo Highsmith, who returned to his alma mater earlier this year to work as Miami’s general manager of football operations after more than two decades of working in the NFL.

All of that knowledge, experience, and know-how – combined with their coach’s drive – will make a difference this season, the Hurricanes say.

“He’s going to make sure everybody’s in line,” sophomore safety Kamren Kinchens said of Cristobal. “He just brings the energy. It may come off serious to most people, but it just comes off as great energy to us. That’s what we know we need behind us. It has everybody going. After he gives any speech, we’re ready to run through a wall for him.”

Added fourth-year junior cornerback Tyrique Stevenson, “It’s nothing but love that [Cristobal] has for this program. All the practices that he puts himself into and everything that came behind him. I feel like it’s love and I feel like that’s the main reason he’s so serious and on top of everything. He wants everything to be a certain way because he knows how this organization is and he knows what this organization means, what it means to the world. I think it’s just his love for the University and everything, just to have him locked in and always going.”

And Saturday will be the Hurricanes’ first opportunity to see just how much they’ve grown over the course of the last 10 months, a stretch that has included offseason workouts, spring drills and most recently, fall camp.

Miami’s offense will be led by quarterback Tyler Van Dyke, the reigning ACC Rookie of the Year who, last season, threw for at least 300 yards and three touchdowns in six straight games before finishing the year with 2,931 passing yards and 25 touchdowns.

While two of his top targets from a year ago – Mike Harley and Charleston Rambo – have moved on, the Hurricanes return third-year sophomore receiver Xavier Restrepo, fifth-year senior tight end Will Mallory and a group of talented young pass catchers that Cristobal noted have grown more consistent throughout the course of fall camp.

On the other side of the ball, the Hurricanes have a talented secondary featuring the likes of Kinchens, Stevenson, safety James Williams and experienced cornerbacks DJ Ivey and Al Blades Jr. And a deep defensive line with veterans like Jahfari Harvey, Chantz Williams and transfers Mitchell Agude, Jacob Lichtenstein, Akheem Mesidor, Darrell Jackson Jr. and Antonio Moultrie will look to pressure opponents all season long. 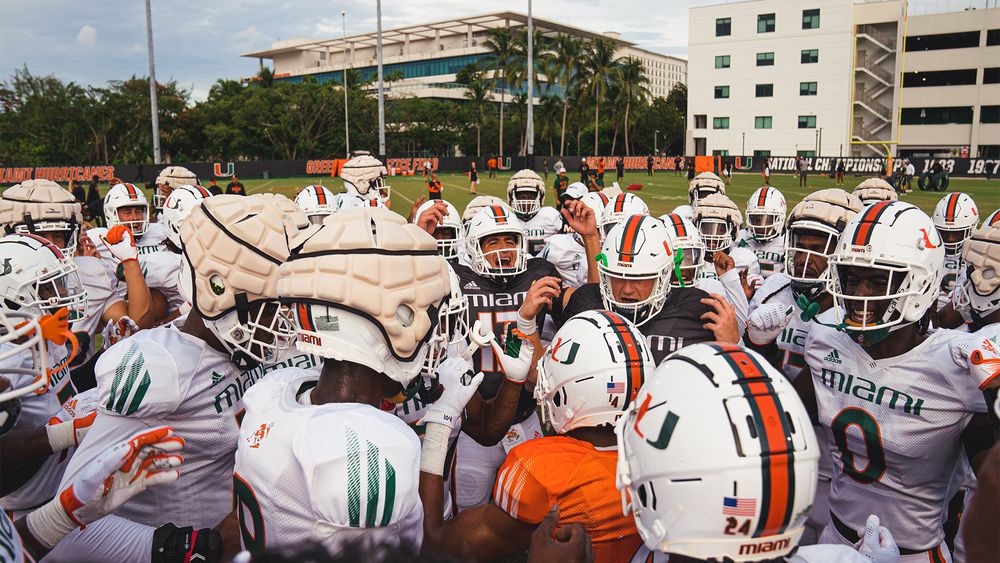 Understandably, all of that talent and experience lead to high expectations.

The Hurricanes enter the season ranked in the top 20 of both the Associated Press Top 25 and the AFCA Coaches Poll. A multitude of players have earned spots on the preseason watchlists for multiple national awards. And when they begin conference play later this year, the Hurricanes will carry with them the designation of being the preseason favorite to win the ACC’s Coastal Division.

None of that, though, will matter on Saturday afternoon.

The Hurricanes know there will be work to do against an upset-minded Wildcats team that will come to Hard Rock Stadium looking to make its own history.

“This team is a good team. They’ve brought in a lot of transfers,” Van Dyke said. “We’re just going to go out, it doesn’t matter who we’re playing, and play our hardest. We’ve got to dominate up front, in the trenches and make plays down the field.”

Said Cristobal, “Week Ones across the country, for generations, have always had surprises here or there. Usually it’s due to a lack of preparation. Well, lack of preparation will never be an issue here. We just have to make sure we clearly understand that every team we play has really good football players and nothing but your very best is ever going to be good enough.”