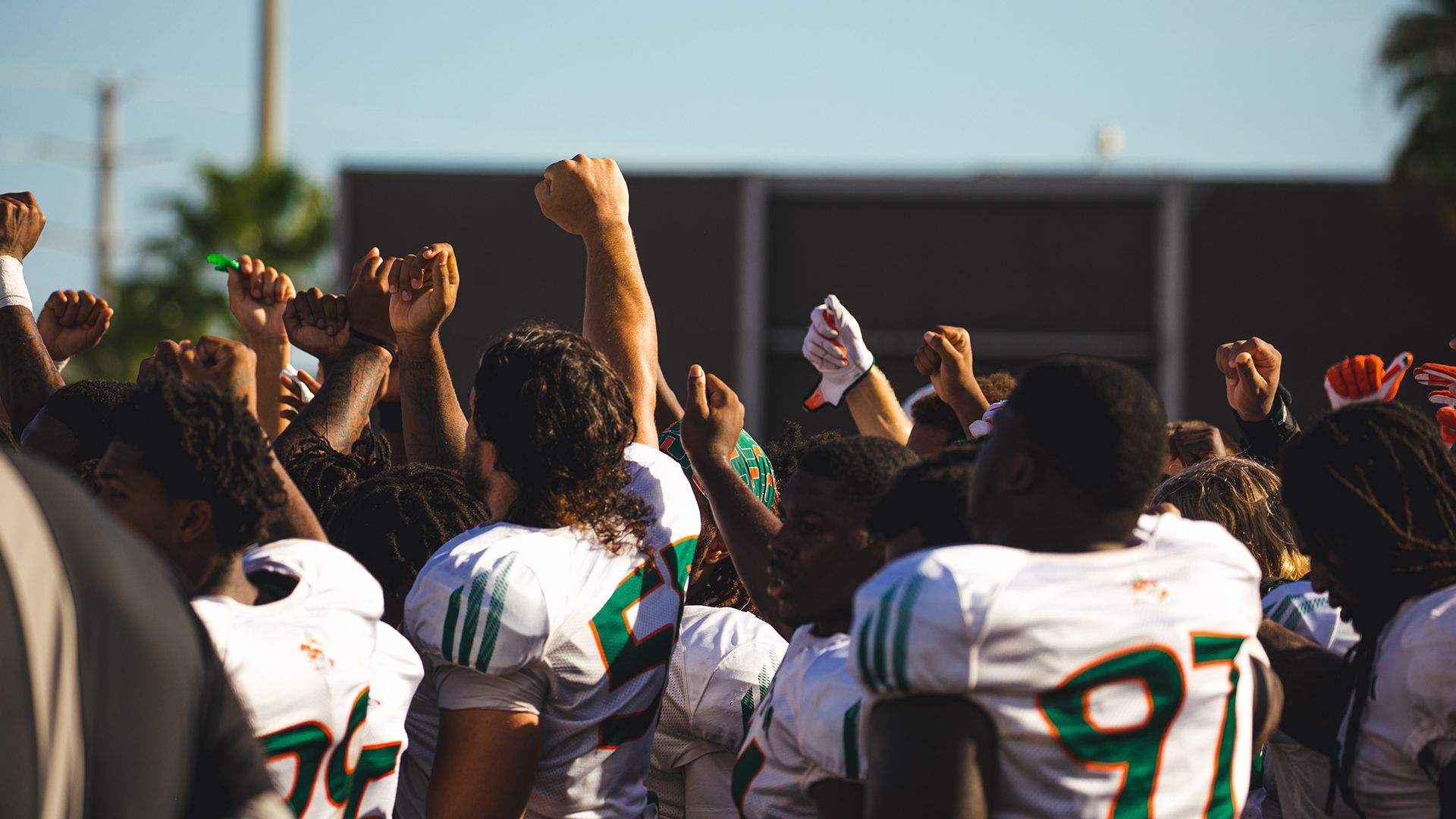 CORAL GABLES, Fla – Since returning to his alma mater last December, Hurricanes head coach Mario Cristobal has made it a point to remind Miami’s players that Greentree – where they practice and work on a daily basis – is sacred ground, where competition matters and champions are made.

On Saturday afternoon, the Hurricanes had another opportunity to experience how grueling Greentree and its conditions can be.

With temperatures in the mid-90s, the sun beating down and South Florida’s sweltering humidity at full force, the Hurricanes held their second scrimmage of fall camp.

They took the field at about the same time of day they’ll kick off their season opener against Bethune-Cookman at Hard Rock Stadium in two weeks. And after the roughly two-hour scrimmage, Cristobal said it was clear Miami’s offseason conditioning program helped the Hurricanes on this particular day.

“To come out and practice on a day like today and run, I think it was 120-plus plays, it’s going to show, right? And it did show. We’ve increased our levels of physicality, of toughness, resiliency, being able to finish and the guys that really attacked the offseason, it shows up in a big, positive way,” Cristobal said. “And the guys that don’t quite understand it, are not there yet, it also exposes some of those guys.

“I think today, we found out a lot about our team. A lot of positive stuff. Some other stuff, we have to get better at. But certainly, the commitment to the offseason – in terms of conditioning, in terms of lifting – it shows up on a day like this. On days like this, football tells the truth and the truth was told today.”

Here, more of what Cristobal had to say about the scrimmage and what’s next for the Hurricanes, who will return to the practice field and the classroom next week…

On how conditions like the ones faced today will prepare the team for the season:

“We have to take a lot of pride in the elements that we practice in and use it to our advantage. There has to be a lot of pride in the fact that we train in this all summer. And the guys do a hell of a job. We’ve got trainers. We’re hydrated. We’re making sure the rest periods are appropriate. They’re conducive to getting better. But it also tests you and a day like today, when you’re in play eight, nine, 10, 11, 12 of a drive, the film’s going to show who really is in game condition and who still has some work to do.

“I think what really stood out is the competitive nature of our team. It’s starting to show more and more. There’s several battles for significant roles and other roles that are still up in the air that will carry on into next week. We saw some big plays and we saw some big-play opportunities not converted on. Again, the film tells the truth. [Sunday] will be a day of assessment. Today, we’ll have a barbecue with the parents, so they can hang out with them for a little bit and then shut down the engines for a day and a half before we get back into school.”

On the differences he saw from the offense in Scrimmage One vs. Scrimmage Two:

“More efficient in several aspects. Had some big plays and had some big drops. There’s no way to cut it. Can’t sugarcoat that. At the end of the day, we have to continue to get better so we can trust ourselves to run the playbook. There’s no shying away from that…We’ve done so many good things. We’ve had some really good things in the passing game, but it’s been inconsistent. And we’ve got to improve that. Had some up-and-down days in every aspect. But we’ve been competing for the most part, back and forth and so far, the competitive levels of our team, they continue to get better. They continue to rise. But we’ve got work to do.

“Camp isn’t over. That’s a misconception out there right now. Camp isn’t over. It just happens to collide with the start of classes. Which for us, is a great opportunity to find out even more about who can be trusted on this team. Who’s going to maintain a high-level of academic obligations and fulfilling their obligations and making sure everything they do…how they do anything is how they do everything. That’s got to resonate in our entire process.”

On what he’s seen from the defense, in terms of fundamentals and development:

“We decided to keep playing today, past what we had originally dialed up because we have to get used to that. These elements…it’s actually nicer out here than what it’s going to be on game day. We have to get used to that. We have to get used to eating at a certain time, getting up at a certain time, having meetings a certain way, walking through a certain way and then more importantly, our process. We’ve got to get those signals from the sidelines and get lined up and play football on football’s terms. Can’t play football on our terms…The best part about these guys, you can go right at it and be very truthful and very honest and typically get some really good results. We still have a lot of work to do. That’s the best way to address it.”

On what happens next for the Hurricanes, with their season opener now officially two weeks away:

“We’re still focused on Miami. We’ve got classes Monday. [Sunday] will be a lift day, a recovery day, a regeneration day. A lot of film. Walk-through. Prepare for classes. Monday is a mandatory off day and we’ll run next week. Tuesday and Wednesday will be heavier days out here, with pads. We won’t be working on the first opponent yet. Still have some situational football we’ve got to get good at. We’ll also sprinkle in different exotic things we’ll see throughout the season so we log that in our memory banks. We’ll bring it out…later in the year. We can summon that muscle in our brain, our cerebral memory, those reps that we took, [so] that they’re not completely foreign to us. That we can use them. There will be heavy days and the rest of it will look like game week. We’ll roll into our opponent by Thursday, Friday.”

On how they handled the day overall:

“I think we’re progressing. I know we’re progressing. We all want more. And that’s okay, too. The only thing you’re disappointed in is if someone decides to give poor effort and for the most part, we’ve been getting good effort. We’ve been trying to do the right things, trying to elevate the standards by which we operate at. That is always really encouraging and really exciting. But we’re not all the way there yet. And it takes everybody getting there to be a really, really good football team, especially the places we’ve got to go and the people we have to play against. Have to keep plugging away.”

On what he’d like to see from the team as camp continues and classes begin at Miami:

“I don’t amp it up as if it’s something extraordinary. Going to class and playing football is not unique to them and hasn’t been unique to any student-athlete…The expectation is how you do anything is how you do everything. And that’s going to be the way we approach it…

“A wise man once told me ‘Don’t ignore the signs.’ So driving that point home is really important. We had our best academic semester in I don’t know how many years this last summer. So that’s really encouraging. Really proud of the way these guys are pushing. But there’s more. There’s more in the tank. And we have to get it out.”