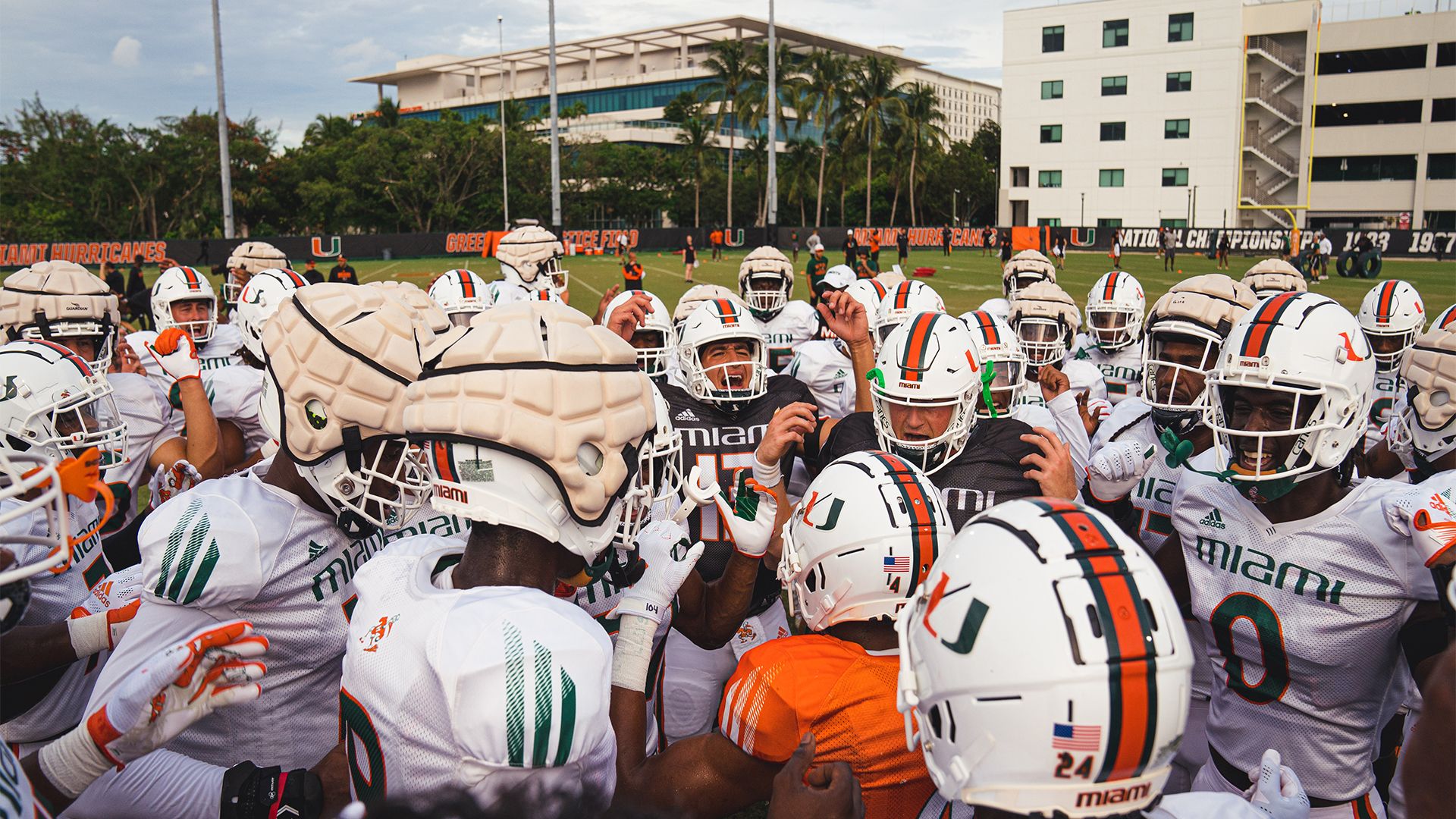 Hurricanes Scrimmage Under the Lights on Greentree

CORAL GABLES, Fla. – A little more than a week ago, the Hurricanes opened fall camp.

On Saturday night, they had the opportunity to get a good look at some of the progress they’ve made when they competed in a spirited scrimmage on the Greentree Practice Fields.

For just over two hours, Miami’s defense and offense tested each other under the watchful eyes of head coach Mario Cristobal and his staff. And though Cristobal made it clear once the scrimmage ended that there is still work to do ahead of their Sept. 3 season opener against Bethune-Cookman, he was pleased with the energy he saw Saturday.

“I thought we came out ready to practice, ready to play,” Cristobal said. “And the physicality – we tried to go a total of 80 plays live and the other 80 thud…and even when we went to thud, we still got carried away a couple of times. And you know what I liked? Guys that typically stay down when they get nicked up popped back up, realizing the difference between getting nicked up and being injured. That’s big.”

Here, is more of what Cristobal had to say about Miami’s first scrimmage, in his own words…

On the effort the Hurricanes showed Saturday:

“We made it real clear we were going to come out and we were going to play football. We’re just going to roll the ball out here, going to practice all our special teams, going to line up and play physical and intense, high-tempo, high-pace football. We did not disappoint in terms of that. There’s progress and it’s clearly obvious. I think the strength and conditioning program has certainly showed up and showed up often so far. Execution is up and down. It’s up and down. You always say the same thing scrimmage one. It’s what you expect. But we don’t. We expect to be better and we’re going to hold ourselves to a higher standard.”

On maintaining and improving intensity:

“It’s a new culture. It’s a new system. And the pace of it is really high. The level of intensity doesn’t really throttle down. We go. We have our days where we scale it down of course because you have to make sure you take care of the body. You ramp up when you have to, you scale it down when you have to. We’re adapting. We’re getting there, but it’s obvious we’re not there yet. And most of the work has to take place between the ears.

“We have seen a willingness to go out there and physically compete, to give pretty good effort – not the championship-level effort we want to, but we’re getting better there. The details that come with this, there are no little things. Making sure you understand what signal’s coming in; what you’ve got to do when that signal comes in; how you’ve got to get lined up as it relates to the play. Those things are all really, really important and we’re not there yet. It’s hit or miss sometimes. Some of the guys have been on point. A lot of progress, but a lot of work to do.”

On the play of the special teams units:

“We can cover. We do have some guys that are athletic, that are explosive, that can cover a lot of ground. Also, really good at punt protection. We’ve got big, jumbo bodies that can protect and also get out there and help us in coverage, which is rare. Usually, you have big guys that can eat up and gobble up a lot of space, but they provide nothing in coverage. We’ve got guys that can do both. And our long snapper, he can get down there in coverage.

“We also ran our kickoff team, our kickoff return team. We feel we have a couple good returners that can help us change the game, change the field. All in all, the only thing we didn’t get into much today was punt return. We did a little bit, but not to the level we wanted to. We just started running a bunch of plays. I got caught up in the red zone stuff…All in all, we got a lot of the right type of work in today.”

On the defense and Miami’s tackling through the first practices:

“We’re getting guys on the ground. Our angles are better. Our pad level is better. Our eyes are more disciplined. That’s the biggest thing. And understanding where our help is. If you know how to leverage the ball, you know who’s working with you…if you clearly understand where your help is, you’re going to do really well, because you can play fast. If you don’t, you’re guessing. And if you’re guessing in football, you’ve got problems.”

On the quarterback play, the importance of splitting reps at that position and the focus immediately after Saturday’s scrimmage:

“I think everyone took a turn today and we spoke about it there in the huddle. We do a lot of good things that have our trajectory going in the right direction. But as a team, we’re not doing enough of the things to play at a really high level, at a consistently high level. Those are the things that [Sunday] when we come in, we’re going to focus on. Cleaning up that tape and making sure we know exactly what to do, how to do it [and] why we’re doing it that way.

“But it starts with taking care of our bodies. Right now, after this week, it’s getting in there, getting in those tubs, getting in those coolers, putting the right stuff in them, coming in [Sunday] and doing all that yoga that they do, all the treatment stuff they do…And get back to work. I’m going to break it down like that for them [Sunday]. They’ve had some great guest speakers. They’re awesome. Strong messages right between the eyes, right in the heart. What we have to do is we have to apply those things and make it real. When you’re sore, when you’re beat up, when you’re out of gas, you have to find the gas because the teams we’re playing against, they have a lot of it. It’s time to get back to work.”

On how he’d like to see the Hurricanes build on what they did Saturday as they move into the second week of camp:

“The reality that we have work to do. The fact that we have made progress, that’s real. The fact we have elevated our levels of physicality, of knowledge of the systems, our culture, the way we operate, but it just keeps going. There’s no time to reflect. There’s time to reassess, be your own self truth-teller. I’m going to be a truth-teller [Sunday]. They’ll get that. And realize that what we do, the foot doesn’t come off the gas because of what we have to do and the timeframe we have to do it. The level of correction, the level of improve that we need requires everything we have. There’s just no other way. And every guest speaker we’ve had has hit that. Elite people, people that are really into achieving the best they can, that’s how they live, that’s how they think. We can speak it into existence, but we have to work it into reality. That’s the bottom line.”