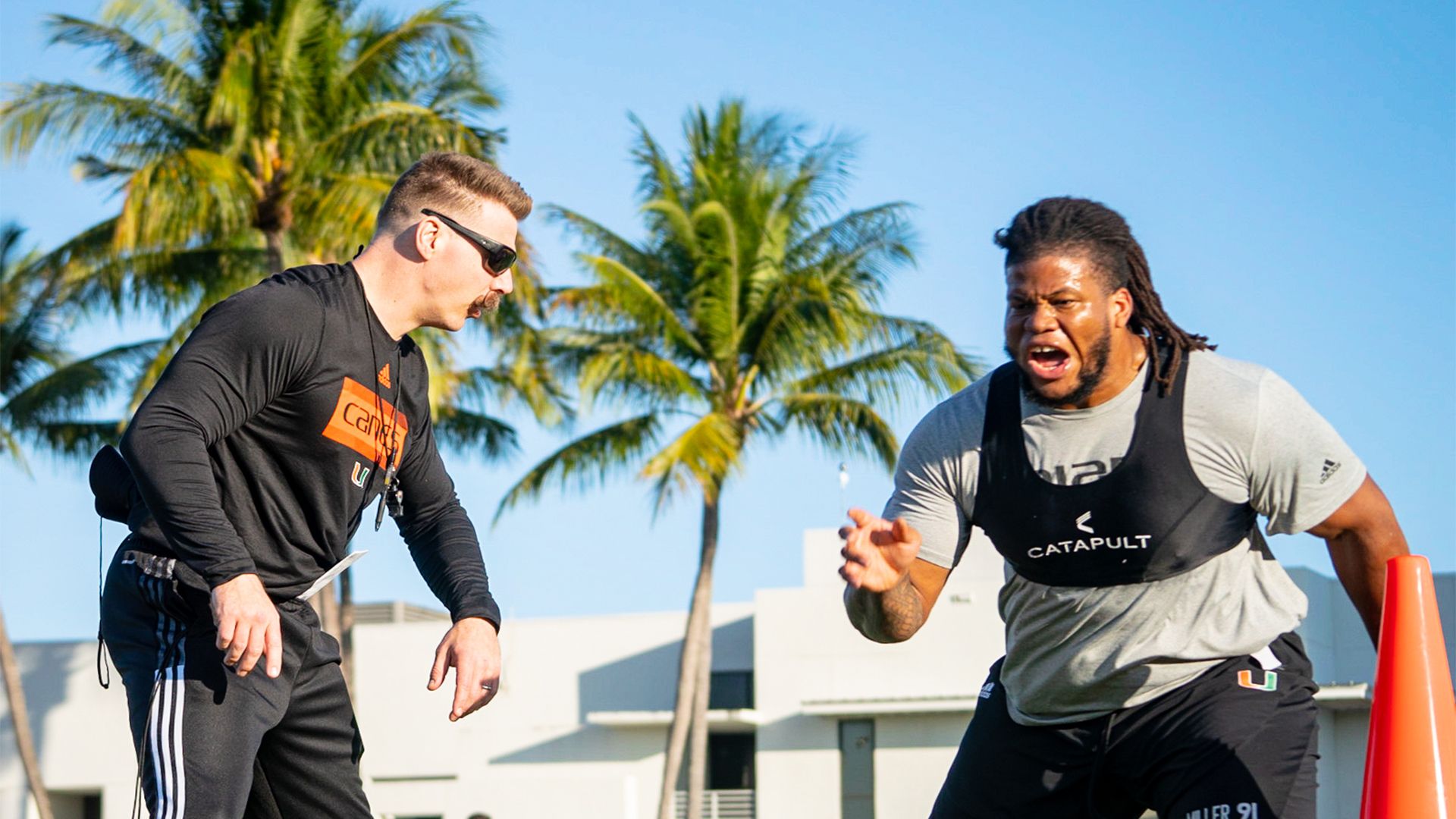 CORAL GABLES, Fla. – Will Mallory had no idea what to expect. Al Blades Jr. didn’t either.

The veteran tight end and senior cornerback only knew what they could glean from online research, and that was that Aaron Feld, Miami’s new strength and conditioning coordinator, seemed to have plenty of energy and was driven to help his players succeed.

That was more than enough for both Mallory and Blades, who needed all of one workout to realize their instincts weren’t far off at all.

“The first day, I was super impressed with them, as coaches and as people. I think that’s most important,” Mallory said of Feld and his strength staff. “They’re going to be able to train us at the hardest and highest level. They’re also going to be able to [make] us high-character people and I think that’s most important for the young men on this team, myself included. It’s just a great opportunity for us to get to work with some great people.”

Added Blades, “I was ready to meet the team, meet the guys he was bringing along and get to work. It was a ‘Let’s hit the ground and get moving’ thing…They brought a positive, good vibe. They’re definitely going to push you, but in a positive manner. The vibes were high in the weight room right away.”

For the last month, Mallory, Blades and the rest of the Hurricanes have been working with Feld to navigate Miami’s new fourth quarter program, an offseason training regimen designed to not only help players get, bigger, stronger and faster, but to prepare them mentally for challenges they may encounter on and off the field.

But twice a week, they also go through mindset training away from the field and weight room.

That, Feld says, is part of what makes the fourth quarter program different from similar offseason training programs used by college football programs across the country.

“You’re going to see a lot of football movements during conditioning. You’re going to see a lot of main movements, complex movements in the weight room. It’s training full body. It’s training acceleration and de-acceleration, change of direction, all of those things, “ Feld said. “Most programs involve a semblance of the same thing. The difference is, I think for us, we also incorporate mindset training where we’re actually teaching these young athletes…It’s not just what they need to think, or what they need to be thinking about, but it’s how they need to think about it. What’s the perspective that they need to have when facing adversity or challenges or whatever that may be?”

That mindset training, several Hurricanes pointed out, has been the difference-maker Feld promised it would be.

“It’s just another way to think about things,” quarterback Tyler Van Dyke said. “A lot of people have a lot of thoughts going through their heads about what’s going on here or there. You need to have that neutral self-talk, which [Feld] talks about all the time, the neutral components in your life…The mindset meetings have taught me to talk to myself when I’m getting tired and don’t want to do the rep anymore. We all have that. We’re all like ‘Oh, I don’t want to do this anymore,’ but you have to. You have to push through it.”

Added Mallory, “The big thing they’ve focused on a lot was mentality and that’s huge for me. That’s something I’ve gotten a chance to learn more about. And I think that’s really been good for myself and for the team. It’s such an important aspect of the game that people may have looked past in the past. It’s been a great opportunity for me to better myself and better the guys around me.”

From the work done on the Greentree Practice Fields, to the weight room, to the meeting room, every aspect of the fourth quarter program, Feld says, is designed with a singular purpose: to create better football players and better people.

There is no lifting for lifting’s sake. There are no specific weight benchmarks players have to hit.

The principal focus for Miami’s strength staff is finding how each individual can improve because improvement is always possible and that is the goal.

“At the end of the day, I’ve seen a dude that can barely bench press 275 put a guy that can bench press 500 pounds on his back. So what’s the number? What’s the benchmark for lifting? … What’s our back squat, power clean, bench press goals? To get stronger than they currently are,” Feld said. “What are our mindset goals? The military has a phrase: ‘Hope is not a good option.’ You don’t rise to the level of the opponent that you’re facing. You fall to your training. Our goal is to teach these guys. Instead of hoping they have the right mindset, the right mentality late in the fourth quarter, it’s to teach them how to have the right mindset and the right mentality late in the fourth quarter. We spend time teaching them how to do that.”

While the Hurricanes may have strengthened their minds and bodies during the fourth quarter program, something else grew stronger, too.

Their bonds have been tightened as they’ve pushed each other and lifted each other up during the toughest moments of training.

That, Miami’s players say, will also make a difference this fall when the Hurricanes line up against their ACC opponents and push to make a return to Charlotte for the conference championship game.

“Those Tuesdays and Thursdays, conditioning days, you have to pick your teammates up, pick your brothers up,” Van Dyke said. “When someone’s tired, you have to help them lean on your shoulder and tell them to keep walking around because you can’t be putting your hands on your knees. You can’t be tired in the fourth quarter of a game when the game is on the line. It starts now, with what’s coming in the fall.”

Added Blades, “I think you definitely get to see who’s who. It shines a light on who’s willing to work, who’s ready to work. Who’s going to be the people to speak up and pull people along? It shows every component of your team and everybody that’s going to play their role. I kind of feel like everyone gets to form their own identity with the team and kind of put the pieces together.”

For the Hurricanes, the fourth quarter program is now in the past.

The team wrapped up workouts this week and several players – including defensive end Jahfari Harvey, Mallory, Van Dyke, and Blades – were recognized for their effort during the training.

Now, the focus turns to spring practice, which begins Monday. Preseason camp awaits in August. A new season will begin in September and a daunting November schedule looms.

As they face all those challenges, the Hurricanes hope the work they’ve done over the course of the last month will make them a stronger, more connected team.

They’re confident it will.

“[This] helped the team jell together…When you’re tired, broke down, you feel like you can’t go anymore, you have to push through it,” Harvey said. “You have to push through it every day so you can be the best person you can be, so you know it’s going to help you a lot in the fourth quarter of games in October and November, when it really matters.”

Added Van Dyke, “I think all aspects of the work we’re doing now – the mental part of things, the physical, the conditioning – this is what prepares us for the season. You win or lose games right now, just going out there, working hard every day.”