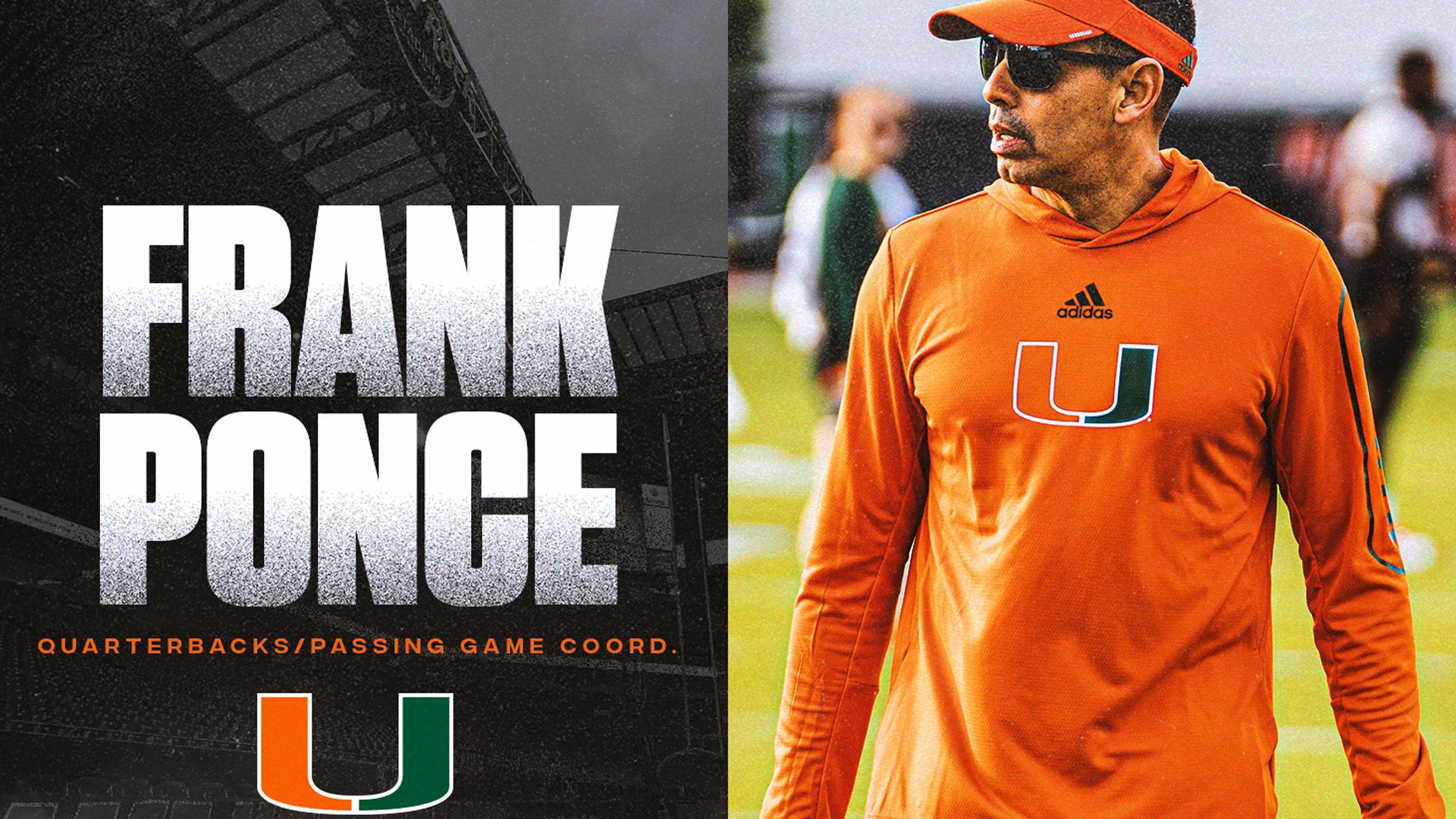 Ponce arrives in Coral Gables after spending the 2021 season as offensive coordinator and quarterbacks coach at Appalachian State. Ponce, a Miami native with deep roots in south Florida, previously worked under head coach Mario Cristobal from 2007-12.

“I am fired up to welcome Coach Ponce back home to Miami,” Cristobal said. “Coach Ponce has a reputation as an elite offensive coach whose groups rank among the nation’s best. He is a tremendous recruiter and talent developer, and his units have always been defined by their toughness, their balance and their explosiveness. I know he will continue to build on that track record at home with the Hurricanes.”

In Ponce’s second stint at App State in 2021, Mountaineers Chase Brice set a single-season program record for passing yards (3,337) and the Mountaineers extended their FBS-leading streak of consecutive years with a 1,000-yard rusher to 10 while averaging 34.5 points per game. The offense helped App State post a 10-win regular season and win the Sun Belt’s East Division title.

“I’m truly excited just being a part of this organization and this University, especially with Coach Cristobal,” Ponce said. “I’ve worked with him before. I know what his vision is and everyone wants to be part of a championship program and he’s going to bring that to the city of Miami.

“I’m excited. My family is here. I am from Miami and I grew up rooting for the Hurricanes. And now I am here wearing ‘The U’ on my chest. And I can’t tell you how excited and happy I am to be here back in the city of Miami, but most importantly, with University of Miami football.”

After helping lead App State to a 48-16 record and three consecutive Sun Belt championships during his five FBS seasons in Boone, Ponce oversaw the 2019 development of Louisville quarterback and new full-time starter Malik Cunningham, who set the school record with a passing efficiency rating of 194.45 — a number that would have ranked No. 2 nationally with one more pass attempt.

Cunningham threw for 4,682 yards with 42 touchdowns, rushed for 1,091 yards with 13 touchdowns and completed 63.6 percent of his throws in his two seasons with Ponce, becoming the only Louisville quarterback to ever have four touchdown passes of at least 75 yards.

Ponce excelled as a high school coach in his home state from 1992-2006 before joining Cristobal’s staff at FIU as the wide receivers coach from 2007-12. Ponce left FIU in 2013 to become the Mountaineers’ passing game coordinator and quarterbacks coach.
Under Ponce’s mentorship, Lamb finished his App State career as the school and Sun Belt record holder with 90 touchdown passes. The only FBS quarterbacks in 2017 with career totals of at least 9,000 passing yards and 2,000 rushing yards were Lamb, Ohio State’s J.T. Barrett and Louisville’s Lamar Jackson.

With 27 touchdown passes and six interceptions as a senior, Lamb had the third-best season for an App State quarterback in terms of touchdown-to-interception ratio, and he led the conference in passing efficiency during three of his four seasons.

As a first-year App State assistant, one season before Lamb became the starter as a redshirt freshman, Ponce directed the Southern Conference’s second-ranked passing attack (271.8 yards per game). He helped quarterback Kameron Bryant set a school record for single-season completion percentage (71.2) and throw for 2,713 yards even though Bryant came into the season with just 13 snaps under his belt.

Ponce is also renowned for his recruiting ability, as he was named the Sun Belt’s top recruiter by ESPN.com in 2010.

He coached six of the top 10 receivers in FIU history during his six seasons with the Golden Panthers. His most notable pupil at FIU was three-time All-American T.Y. Hilton, now a standout with the Indianapolis Colts.

Ponce enjoyed a decorated playing career as a quarterback at Miami Senior, where he was the team MVP and a finalist for the 1988 Miami Herald Hispanic Athlete of the Year Award. He went on to become the starting quarterback for two years at Arizona Western College, where he earned an associate’s degree in arts in 1990. He earned a bachelor’s degree in physical education from Florida International in 1997.

Ponce and his wife, Christine, are the parents of two daughters, Isabel and Leah, and a pair of sons, Frankie and Lucas.