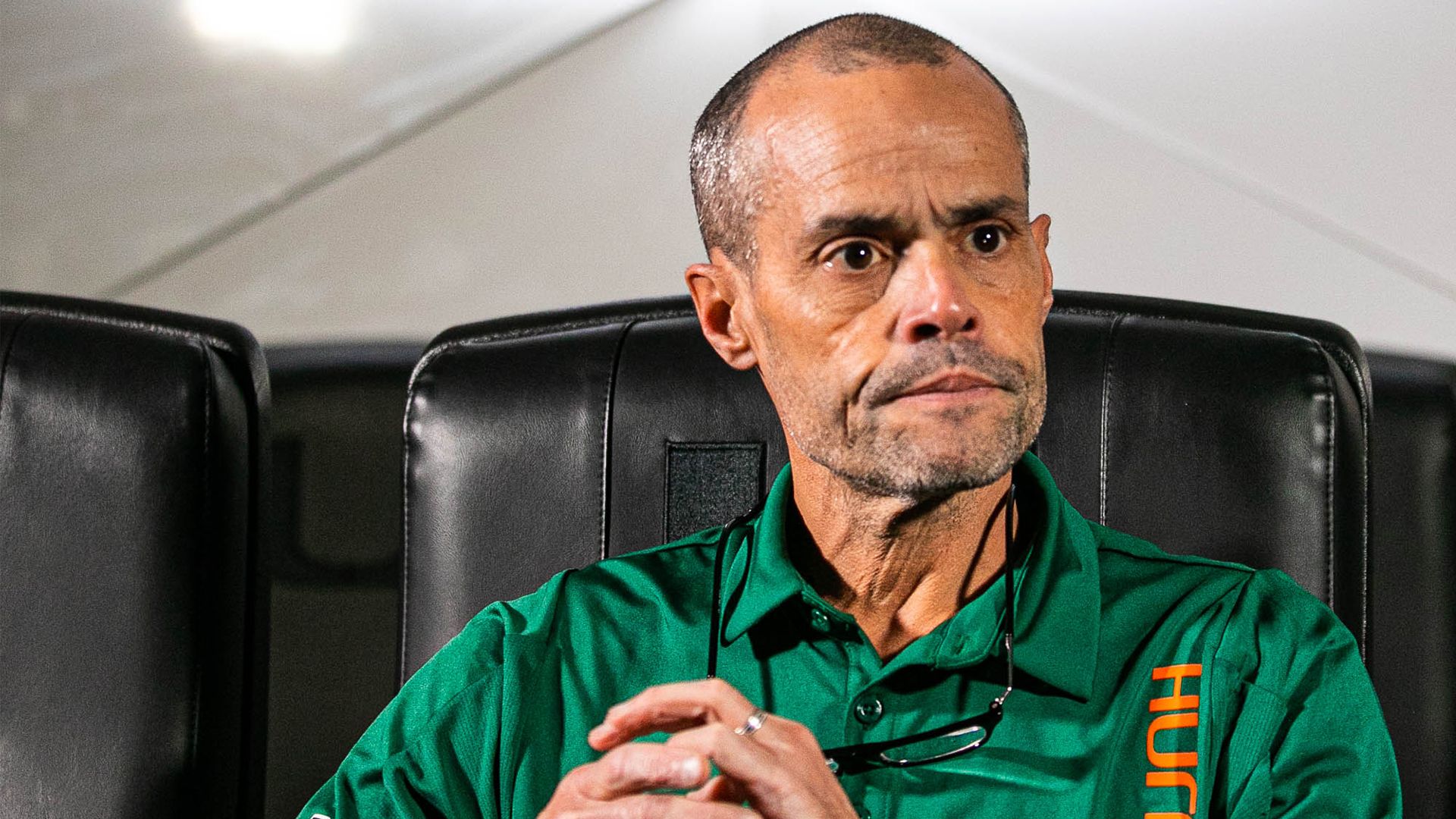 Ready to Build a Championship Line

A South Florida native who grew up watching the Hurricanes through their dominant run in the 1980s, he knows full well what the program has the potential to be – and how its success can impact the community.

A former teacher and coach at Miami’s Christopher Columbus High School, he has a deep appreciation for the work done by the high school football coaches who on a daily basis coach and teach some of the most talented young athletes in America.

And after more than three decades of friendship with new Hurricanes head football coach Mario Cristobal, Mirabal knows better than just about anyone what could be ahead at Miami.

That’s exactly why Mirabal was more than happy to join Cristobal’s staff in Coral Gables.

“My whole goal is to try and help him build a program that becomes a championship program,” said Mirabal, who was named Miami’s assistant head coach and offensive line coach last week. “I’ve been able to help him do that at FIU. I’ve been able to help him do that at the University of Oregon. And coming [are] even bigger and better things here at the University of Miami. It’s awesome because he’s a brother to me…I want to see him succeed so that everybody can be as proud of him as I am of him and the position that he’s in right now in his life…I take a tremendous amount of pride in our relationship and I treasure it.

“I’m here to help him achieve what he wants to achieve for this community.”

It’s a community that means the world to both Mirabal and Cristobal, whose friendship was forged in the school hallways and on the football field at Columbus, their shared alma mater.

The two played together on the Explorers’ offensive line and Mirabal had a front-row seat when the University of Miami recruited his best friend.

Cristobal eventually went on to win two national championships as a lineman for the Hurricanes before pursuing a coaching career that started when he became a graduate assistant at UM and included stops at Rutgers and Miami as an assistant. He later became the first Cuban-American head coach in FBS history when he took over the program at FIU in 2007.

Opportunities at Alabama and of course Oregon followed.

He took on a variety of roles outside the classroom, too, serving as an assistant track and field coach, a volunteer offensive line coach, strength and conditioning coordinator, running backs coach and then varsity offensive line coach for the Explorers.

He helped lead Columbus to three district titles during his four years as offensive line coach and run-game coordinator. Before long, though, came an opportunity to reunite with Cristobal.

After being named the Panthers’ coach, Cristobal brought Mirabal to FIU with him as first a tight ends coach and assistant head coach before Mirabal shifted to coaching the offensive line in 2010.

When Cristobal was named the head coach at Oregon, he again reached out to Mirabal, who was coaching at Marshall where he’d helped the Thundering Herd post a 44-22 mark and total eight first or second-team All-Conference USA selections on the offensive line between 2013 and 2017.

Mirabal first coached the Ducks’ centers and offensive guards before taking over as offensive line coach and associate head coach last year. And during that time, as they had years earlier at FIU, Cristobal and Mirabal worked together to better the Ducks’ offensive production.

“Truly, we coach the offensive line together. When we do individual drills on like a Tuesday, he’ll take the left side and I’ll take the right. Then on Wednesday, I’ll take the left side and he takes the right side. He’s actively involved in the offensive line and he should be. He’s a heck of an offensive line coach,” Mirabal said. “Because of our relationship, there’s no sensitivity…At the end of the day, he’s the head football coach. If he says ‘We’re going to do it that way,’ then that’s the way we’re going to do it. We talk about technique, fundamentals, stuff like that. We bounce that off each other…We have one voice. The way we call things, our mentality, our philosophy on how offensive line needs to be played is the same…

“We feel that the offensive line needs to be played the way that he was raised and I was raised by our parents: working-class, tough, gritty, dirt under your nails, grease on your elbows, that’s who we are. That’s who the both of us are. We’re like-minded in that aspect.”

It’s a philosophy that works.

The Ducks averaged more than 31 points per game each of Mirabal’s four years at Oregon. Last season, they advanced to their third straight Pac-12 Championship game and averaged 203.2 rushing yards per game, a number that ranked No. 24 in the nation. Lineman T.J. Bass, meanwhile, was named to the Pac-12 All-Conference Team and was named an All-American by The Action Network.

In 2019 under Mirabal’s tutelage, Oregon offensive tackle Penei Sewell won the Outland Trophy as the nation’s top offensive lineman and was a consensus All-American before he was selected by the Detroit Lions with the seventh overall pick in the 2021 NFL Draft.

That kind of success hasn’t come as a surprise to another of his former players – former Hurricanes offensive lineman Joaquin Gonzalez, who played for Mirabal at Columbus.

“He really taught me the love of the process. As a high school coach, he had to work at his craft. And in the same way, he’s done it at the collegiate level…You could sit here and really say today that Alex Mirabal is one of the top five, if not the best, offensive line coach in the nation. That’s not something that was given to him. That’s something that this kid who grew up in Miami just had the work ethic to go do,” Gonzalez said. “With all the intensity that he brings, he has this approachableness to him. It makes you open up. You feel at ease and that’s one of the things that a lot of people love about him. I think that whenever you’re teaching somebody, having that barrier broken down, just because of your approachability, that’s very important. And [another] thing Alex does extremely well is he really blends X’s and O’s with technique.”

Though Mirabal has only been in Coral Gables for a short time, he’s already doing his best to get to know the players he’ll be working with at Miami.

He’s scoured through a good chunk of the Hurricanes’ game film from last season. And he’s working his way through film from spring practice and preseason camp, so he can see what some of Miami’s younger players, or those who were injured during the regular season, can do.

The veteran coach says he’s excited by what he’s seen.

“They have pride. There’s athleticism. There’s toughness. There’s things that I feel we can do from a technical standpoint and from a schematic standpoint, just kind of take advantage of them or fix some things you might see differently,” Mirabal said. “Offensive line coaches, we’re all a community, but we do things a little bit differently, so just things like that. But I’m excited. I’m really fired up…Zion [Nelson], great player. Jakai Clark, great player. You see [DJ] Scaife. You see Justice [Oluwaseun]. Then you see some of those other guys you don’t see on tape and you’re like ‘Oh, man! I’m really, really fired up.’ I’m more fired up this afternoon than I was this morning because I got to see ‘Okay, this room is more than just the guys that everybody in the media talks about, the guys the fans talk about.’ The guys behind the scenes that haven’t had the opportunity yet, they’re exciting to watch.”

Now, Mirabal knows it will be up to him to help take those players to the next level.

It’s a challenge the coach embraces, not only for himself, but for his head coach, and best friend, and the community that raised them both.

And needless to say, he’s excited to help Miami build on the rich history he knows so well.

“It’s Miami. When I was growing up, it was The U. In the late 80s and the 90s, the pride, the toughness, the physicality…I don’t like to use the word swagger, but the swagger was that they went on the field and whooped people’s butts. They physically whooped peoples’ butts. And the pride they did it with,” Mirabal said. “To be part of that, to be able to build on that tradition of tremendous offensive line play – the Dennis Harrahs, Leon Searcys, the Bryant McKinnies, the Joaquin Gonzalezes, the Brett Rombergs, K.C. Jones, Martin Bibla – all those guys…that’s what we have to live up to. We have live up to that…